UNESCO Says Site of the Burial of Abraham, Issac, and Jacob is in Danger from Israeli “Vandalism” 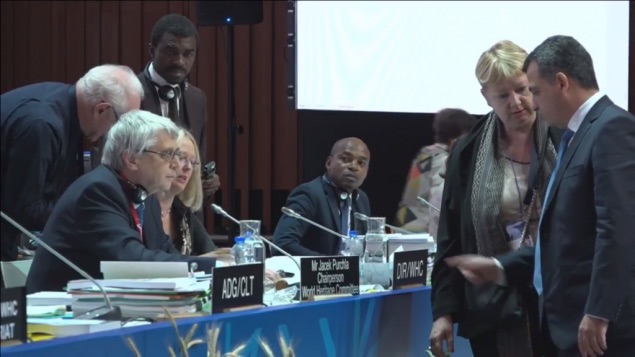 On July 7, UNESCO declared the core of the Old City of Hebron to be a Palestinian World Heritage site. UNESCO also added it to the World Heritage in Danger List, specifically naming the burial place of the biblical patriarch Abraham and his son Isaac and grandson Jacob as at risk. This site is holy to Jews, Christians, and Muslims. Muslims refer to the site as Al-Haram Al-Ibrahimi or the Ibrahimi Mosque, while for Jews, it is the Tomb of the Patriarchs.

Palestinian representatives to UNESCO had sought to fast-track a motion to declare the Ibrahimi Mosque/Tomb of the Patriarchs site in danger, asserting that Israel was responsible for damage and vandalism there. Security had to be called when tempers flared at the UNESCO committee meeting, held in Warsaw, Poland.  Ordinarily, UNESCO voting is made public, but Poland, Croatia and Jamaica asked this vote to be by secret ballot. Israeli Ambassador Carmel Shama-Hacohen objected that the vote was not truly secret, apparently hoping that if it was private, moderate Arab countries would reject the Palestinian motion. The final vote was 12 to 3, with 6 abstentions.

Afterward, the Palestinian foreign ministry described the decision as a diplomatic success achieved despite Israeli and American influence.  Israeli government officials, Israel’s UN ambassador, and its UNESCO representative all reacted angrily to the decision, calling it an affront and an aggression against the Jewish people to attempt to dissociate them from a burial site of Biblical and religious importance.

Prime Minister Benjamin Netanyahu of Israel was outraged that UNESCO “determined that the Cave of the Patriarchs in Hebron is a Palestinian site, i.e. not Jewish, and that the site is in danger. Not a ‘Jewish’ site?!”

Emad Hamdan of the Palestinian Hebron Rehabilitation Committee expressed appreciation for the vote to name the site as at risk from the “occupation.” Palestinian Authority Foreign Minister Riyad al-Maliki said that “Israel’s occupation of our state does not give it sovereignty over any patch of our land in any way.”

The Old City of Hebron is located in the West Bank, which is home to about 200,000 Palestinians and close to a thousand Jewish settlers, who live in heavily guarded enclaves.

UNESCO and the United Nations have often served as proxy battlegrounds for Israeli and Palestinian interests, and the conflict has been heated in recent years. After this most recent UNESCO decision, Israeli defense minister Avigdor Lieberman, head of the Yisrael Beiteinu party – or “Israel is Our Home” party, referred to UNESCO as “a politically biased, disgraceful and anti-Semitic organization.”

This latest UNESCO decision follows closely on another controversial UNESCO statement on May 1, when UNESCO issued a decision on Occupied Palestine submitted by Algeria, Egypt, Lebanon, Morocco, Oman, Qatar, and Sudan, reiterating other United Nations statements on the status of Jerusalem and Palestine, and stating that “all legislative and administrative measures and actions taken by Israel, the occupying Power, which have altered or purport to alter the character and status of the Holy City of Jerusalem, and in particular the “basic law” on Jerusalem, are null and void and must be rescinded forthwith.” 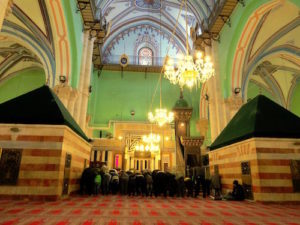 Muslims pray, By بدارين (Own work), via Wikimedia Commons.

The same May 1 decision stated that UNESCO deplored the archaeological and other construction works by Israel and “Regrets the failure of the Israeli occupying authorities to cease the persistent excavations, tunneling, works and projects in East Jerusalem, particularly in and around the Old City of Jerusalem, which are illegal under international law” and “reiterates its request to Israel, the occupying Power, to prohibit all violations which are not in conformity with the provisions of the relevant UNESCO conventions, resolutions and decisions.”

In that May decision, UNESCO “reaffirmed” that Al-Haram Al-Ibrahimi/Tomb of the Patriarchs in Al- Khalil/Hebron and the Bilal Ibn Rabah Mosque/Rachel’s Tomb in Bethlehem “are an integral part of the Occupied Palestinian Territory,” and stated that UNESCO shares the conviction affirmed by the international community that the two sites “are of religious significance for Judaism, Christianity and Islam.”

The point of identifying a World Heritage site as endangered is usually to draw world attention to neglect or impending damage to the physical site, or all too often these days, to alert the world to damage or loss from violence during an active civil or international conflict.

It is not clear what UNESCO hopes to gain in taking this latest decision. Clearly, in naming Al-Haram Al-Ibrahimi/Tomb of the Patriarchs in Al- Khalil/Hebron as an endangered site due to alleged Israeli “vandalism”, UNESCO is reiterating a political position that Israel is an Occupying Power and has no legitimate presence, and pushing back further against any Israeli claim to the Tomb of the Patriarchs. This appears to be unrelated to immediate cultural loss or to any actual physical threat to the site.

Al-Haram Al-Ibrahimi/Tomb of the Patriarchs is the third cultural site on UNESCO’s “List of World Heritage in Danger” that is registered as located in the “State of Palestine.” The other two are the birthplace of Jesus in Bethlehem and the “cultural landscape of Southern Jerusalem,” around Battir.