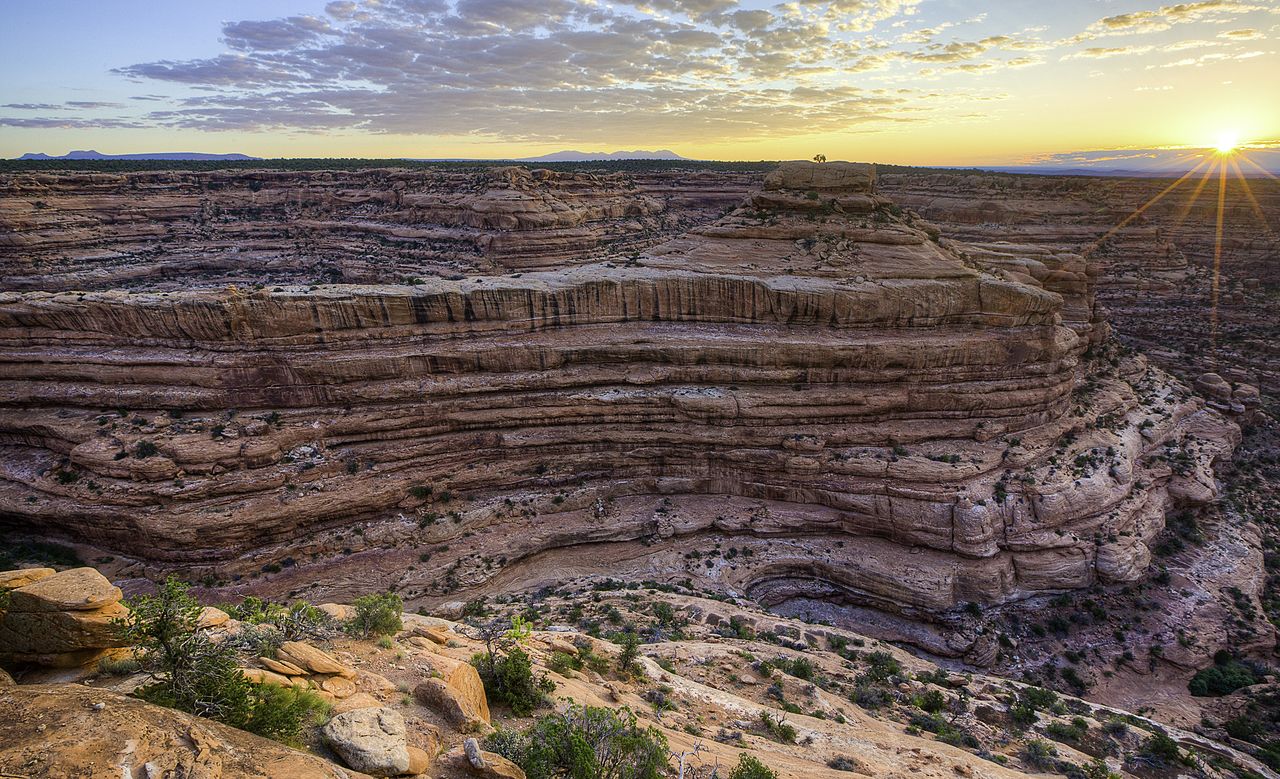 The Four corners region of the United States, where Utah, Arizona, Colorado and New Mexico meet, is rich in history. Complex civilizations that rose and fell over thousands of years were connected through trade routes to parts of California, Mexico, and the Yucatan Peninsula. Vestiges of ancient cultures that are found in archaeological sites and seen in ancient pottery and rock pictures still echo in the dances and ceremonies of current day Native American tribes. 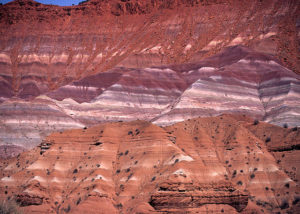 This land holds some of the richest fossil beds in the United State, illuminating the United States’ evolutionary past. The fossil beds and former inland seas in the Four Corners Region contain some of the richest oil, gas, uranium, and coal deposits in the country and in some cases, in the world. The extraction of these mineral and gas resources currently provides billions of dollars in revenue to Four Corners states; a large portion of which funds public education.

In contrast to the Obama administration’s more all-inclusive energy strategy, which focused on the development of renewable markets along with fossil fuels, the Trump administration’s energy plans focus almost exclusively on the development of non-renewable energy sources like oil, gas, coal, and uranium. As a White House Energy & Environment Fact Sheet on May 14, 2019, entitled President Donald J. Trump Is Unleashing American Energy Dominance stated, “President Trump has taken action to open up our Nation’s abundant natural resources.”

These policies have placed Utah’s national monuments and New Mexico’s Chaco Canyon National Park in the cross hairs of an energy extraction plan that has raised public concern and triggered numerous  lawsuits.

Bears Ears became the center of national attention on December 4, 2017 when President Trump reduced the size of the newly created national monument by 85%. That act sparked a firestorm of litigation that is currently being considered in Federal court. The plaintiffs in Utah Dine Bikeyah v. Trump[1] contend that the President lacked authority under the Antiquities Act of 1906 to reduce the size of monuments, a role the law has allocated to congress. The defendants have moved to dismiss the complaint.

Reports have indicated that the decision to reduce the size of the monument was sparked by energy extraction issues.

In contrast, the order by President Barack Obama to create the monument in 2016 had recognized both environmental concerns and tribal cultural claims. The decision to create the vast monument came after over a decade of inter-tribal planning and consultation as well as after more than 1,000 meetings with all interest groups in the area, conducted by state and federal officials, over a four-year period.

In February 2019 the San Juan County Commission, which administers the county where Bears Ears National Monument is located and which had previously opposed the creation of the monument, passed two resolutions. The first resolution rescinded all prior Commission resolutions in opposition to the monument and replaced them with a resolution to oppose the reductions to the monument. The second resolution withdrew the Commission from the Bears Ears lawsuit as interveners on the side of the defendants. 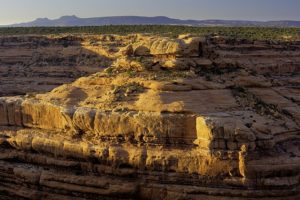 The San Juan County Commission’s about-face came after a November 2018 special election, when the county’s first majority Navajo commission was sworn into office. This precedent followed redistricting ordered by U.S. District Court Judge Robert Shelby after finding that San Juan County districts had been racially gerrymandered, in violation of the Voting Rights Act.

(Since the 1980s a majority of Navajo voters had been concentrated in one district, although the county as a whole held a majority Navajo voting population.  San Juan County appealed the gerrymandering decision in the 10th Circuit Court of Appeals, which upheld the lower court’s decision, stating, “In summary, we find no error in the district court’s well-reasoned rulings.”)

A bill introduced in February 2019 in the House of Representatives, the Bears Ears Expansion And Respect for Sovereignty Act, H.R.871, called for enlarging the Monument to the original 1.9 million acres that the Bears Ears Inter-Tribal Coalition proposed to President Barack Obama on October 15, 2015. The bill, introduced by Arizona Congressman Ruben Gallego, currently has 108 cosponsors.

The change in the position of the San Juan County Commissioners and the introduction of H.R.871 have increased the impetus to restore full protection for the lands originally allocated to Bears Ears National Monument.

The dominant issues in the public actions and legal and political disputes are:

Plains with the Valley of the gods, Author US Bureau of Land Management, 4 August 2012. Formerly part of Bears Ears National Monument, these lands were excluded when President Trump reduced the size of the monument.

In addition, there is public concern over the significant reduction in protection offered to tens of thousands of archeological sites in the region, and the loss of tourist revenue that Bears Ears National Monument would have afforded the region.

A Notice of Availability of the Bears Ears National Monument Indian Creek and Shash Jáa Units Proposed Monument Management Plans and Final Environmental Impact Statement, Utah was posted in the Federal Register by the Bureau of Land Management and the Environmental Protection Agency (EPA) on July 26, 2019.  The Executive Summary for Bears Ears and full proposals for the monuments are available online. Any person who meets the conditions in 43 CFR 1610.5-2  may file a comment or protest. You must have “participated in the planning process and have an interest which is or may be adversely affected by the approval or amendment of a resource management plan” to file a protest. A protest may raise only those issues which were submitted for the record during the planning process.

(Instructions for filing a protest with the Director of the BLM regarding the Proposed MMPs may be found online at https://www.blm.gov/filing-a-plan-protest and at 43 CFR 1610.5-2. The review period for the management plans ends August 26, 2019.) 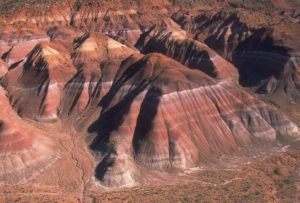 At the same time that President Trump reduced the size of Bears Ears National Monument, he also diminished Grand Staircase-Escalante National Monument (GSENM) acreage by almost half. Litigation to reverse the reduction was promptly filed. On December 6, 2017, that lawsuit was consolidated with Utah Dine Bikeyah v. Trump, now before U.S. District Court Judge Tanya S. Chutkan in the District Court for the District of Columbia.

President Bill Clinton created Grand Staircase-Escalante National Monument (GSENM) in 1996 through Proclamation 6920, under the Antiquities Act of 1906. The monument was created to protect a “spectacular array” of scientific, cultural, historical, and environmental resources. As President Clinton stated, “The monument presents exemplary opportunities for geologists, paleontologists, archeologists, historians, and biologists.”

In addition to sites important to Native American and Mormon history, vistas of amazing geology, and unique ecology, GSENM includes some of the most significant fossil grounds in the world, spanning 20 million years. The Mesozoic, Triassic, Jurassic, and Cretaceous periods are all represented. Many areas important to the fossil record are now cut out of the monument. Some paleontologists estimate that “at least a third of the finds over the past 20 years in the GSENM would never have been discovered if it weren’t for the designation.” 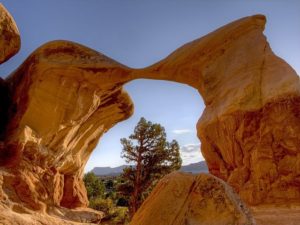 Already, mining claims have been filed in the land carved out of the monument, though whether mining can commence while a lawsuit is in progress remains in question.

In May 2019, the Tenth Circuit Court of Appeals ruled on the question of “whether the Bureau of Land Management violated the National Historic Preservation Act (NHPA) and the National Environmental Policy Act (NEPA) in granting more than 300 applications for permits to drill horizontal, multi-stage hydraulically fracked wells in the Mancos Shale area of the San Juan Basin in north[western] New Mexico.”

The court concluded, “…the BLM never considered the cumulative impact of the water use associated with the 3,960 reasonably foreseeable horizontal Mancos Shale wells for five specific EAs.”

Celebration by tribal and environmental groups was short lived, however, as by the end of June the BLM responded with Findings of No Significant Impact (FONSIs) and Environmental Assessments (EAs) that denied that serious environmental problems resulted from the drilling. The reports were rushed through a 10-day comment period over the July 4th holiday. 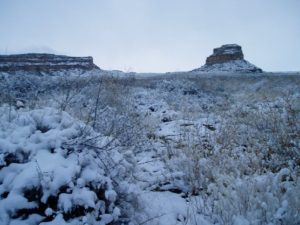 Eighteen environmental and tribal groups quickly rallied with a letter to Tim Spisak, State Director of the New Mexico State Office of the BLM asking him to reject the reports and requesting public hearings in response to the 10th Circuit court’s findings.

Wild Earth Guardians, “a nonprofit environmental advocacy organization dedicated to protecting the wildlife, wild places, wild rivers, and health of the American West,” have submitted technical comments to the BLM’s State Director and to the Farmington field office describing in great detail the discrepancies in the FONSIs and EAs.

In another corner of New Mexico, ongoing destruction of archeological sites may speak to the agency’s attitude as a whole. On July 11, 2019, Tay Wiles of High Country News reported in Staffers allege misconduct at BLM’s busiest oil and gas office: Complaints to Interior’s Office of Inspector General reveal concerns that the Carlsbad Field Office broke laws to favor industry that BLM archeologists have reported numerous incidence of damage to archeological sites in violation of state and federal law that the BLM has failed to assess, and which have resulted in encouraging oil and gas development in the Permian Basin.