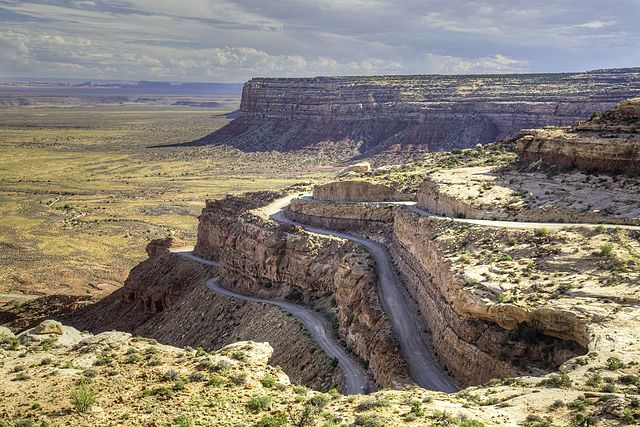 After President Trump removed the vast majority of the Bears Ears National Monument in southeast Utah from federal protections on December 4, 2017, threatening an estimated 100,000 archaeological sites and sacred locations, Utah Senator Orrin Hatch cheered the reduction, calling the designation of the massive monument by President Obama on December 28, 2016 a “federal land grab.”

Hatch called Obama’s original designation of the 1.35 million acre monument a “betrayal” of grassroots efforts by politicians and Utah locals to find compromise.

Actually, the Trump administration’s action resulted in the overthrow of a ten-year grassroots planning process that built inter-tribal consensus on the preservation of Native American ancestral lands. The 2017 stripping of federal protections from Bears Ears in order to open the region for energy exploration and extraction was not simply about money, mining, or even public access. It was also a conscious abandonment of a decade’s work to reframe the federal-state-Indian dialog on an important Native cultural landscape.

Former President Obama’s Proclamation No. 9558 – Establishment of the Bears Ears National Monument (BENM) had focused on the ancient ties of Native Americans to the 1.35 million acres that made up the monument – a region so deeply entwined with native histories that testimony was given that one cannot walk more than an eighth of a mile through the monument without stumbling across a site or object. 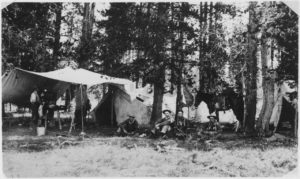 The proclamation detailed the evidence of this history: the projectile points of the Clovis people, the kivas, cliff dwellings, ancient roads and petroglyphs, the burials of Navajo, Hopi, Ute and Puebloan ancestors, the sacred ceremonial sites and the collection of medicinal and ritual plants which can be found in no other place. In somewhat poetic prose, it described the tens of thousands of sites, objects, plants and animals significant to and documented by tribes, archeologists and paleontologists in over a decade of work. The proclamation captured the majesty and beauty of the Bears Ears natural world:

“For hundreds of generations, native peoples lived in the surrounding deep sandstone canyons, desert mesas, and meadow mountaintops, which constitute one of the densest and most significant cultural landscapes in the United States.”

The focus on dialog with tribes during the ten years of planning represented a shift toward acknowledging the importance of tribal representation in actions on public lands. Three provisions in the U.S. Constitution specifically mention “Indian tribes.”[i]  They grant the federal government the power to make treaties and engage in commerce with tribes as foreign governments, and recognize the pre-existing sovereignty of the tribes. These constitutional commitments and the frequent references in regulations to government-to-government relationships and orders directing consultation with tribes were key elements guiding negotiations.[ii]

The Trump administration’s 85% reduction of the Bears Ears monument was met with national outrage and rapid legal action. The Bears Ears Inter-Tribal Coalition, Utah Diné Bikéyah, major environmental and conservation organizations, outdoor retailers, and others filed lawsuits challenging the proclamation as illegal under the Antiquities Act. The twenty-year-old Outdoor Retailer show, the largest exhibition in the world of outdoor sports gear, pulled out of Utah, taking with it some $45 million of Salt Lake City’s annual revenue.

In anticipation of Trump’s proclamation, H.R. 4518, the Bears Ears National Monument Expansion Act had been introduced on December 1, 2017 by Rep. Ruben Gallego [D-AZ-7]. It actually proposed that Bears Ears National Monument be expanded by 30% to 1.9 million acres, the size originally proposed by the inter-tribal coalition. As of this writing, it has 127 co-sponsors, but is unlikely to be acted upon in this 115th Congressional session, which will end early in January 2019, and a new bill will have to be introduced.

On the same day as Trump’s proclamation to reduce the size and modify the status of Bears Ears, a bill to replace Bears Ears’ monuments designation was introduced in Congress by Utah representatives Rep. John R. Curtis [R-UT-3] and co-sponsored by Utah representatives Rep. Rob Bishop [R-UT-1], Rep. Chris Stewart [R-UT-2], Rep. Mia B. Love [R-UT-4]. As of this writing the bill has had no other co-sponsors.

In contrast to the Obama administration’s recognition of tribal cultural heritage and Native sovereignty, the decision to shrink Bears Ears made little mention of Native Americans’ relationship to the land, sites, and objects within the monument. The Trump administration’s actions significantly reduced the scope of tribal consultation on the region. The Bears Ears Commission was renamed as the Shash Jáa Commission; it included only the 142,337-acre Shash Jáa unit in its scope. The revision also named a seat for the elected officer of the San Juan County Commission representing District 3 in that officer’s official capacity, further reducing tribal representation.

The bill establishes the Shash Jaa National Monument (142,337 acres) and the Indian Creek National Monument (86,447 acres), to be managed by the Shash Jaa Tribal Management and Indian Creek Management Councils, respectively. The role of the previously established Bears Ears Commission was to “advise” these councils. This bill is also unlikely to be acted upon in this 115th Congressional session, which will end early in January 2019, and a new bill will have to be introduced.

Shaun Chapoose, a member of the Bears Ears Commission, testified that the Shash Jaa National Monument and Indian Creek National Monument Act violates “basic tenants of federal Indian law and the United States’ treaty, trust and government-to-government relationship with Indian tribes.” He stated that the bill was “an inappropriate return to the failed policies of the 1800’s when the United States would divide tribes and pursue its own objectives by designating for itself which tribal representatives the United States would negotiate.”

At a hearing on the Shash Jaa and Indian Creek Act at the House Natural Resources Subcommittee on Federal Lands on January 9, 2018, Chapoose asked the Subcommittee to recognize the Tribes that were excluded from the hearing stating, “Each of the Tribes making up the Bears Ears Inter-Tribal Coalition is its own sovereign government. Each of us have our own unique and negotiated relationship with the United States. This relationship is highlighted in the United States Constitution and began long before Utah became a state.”

He continued, “Yet, at this hearing, our five Tribes are forced to share one seat, while every level of the State of Utah is represented, including: the state government, county government and a Utah stakeholder lobbying group.”

Historic Precedents in the Creation of Bears Ears National Monument

The Creation of the Bears Ears National Monument set a number of historic precedents. It was the first time that an alliance of individual sovereign tribal nations, the Bears Ears Inter-Tribal Coalition, had come together to petition the President of the United States on a government-to-government level to create a National Monument under the Antiquities Act. The tribes had worked for almost a decade documenting objects and sacred and cultural sites for protection within a 1.9 million acre area in the Bears Ears region prior to petitioning the President.

It was also the first time that a monument was created with such extensive tribal consultation.  President Obama had established the Bears Ears Commission, noting that, “The traditional ecological knowledge amassed by the Native Americans whose ancestors inhabited this region, passed down from generation to generation, offers critical insight into the historic and scientific significance of the area. Such knowledge is, itself, a resource to be protected and used in understanding and managing this landscape sustainably for generations to come.”

The Commission consisted of an elected officer from each of the tribes of the tribal coalition; the Hopi Nation, Navajo Nation, Ute Mountain Ute Tribe, Ute Indian Tribe of the Uintah Ouray, and Zuni Tribe. In another first, the commission was created exclusively of tribal members to give consultation to the federal agencies, “in recognition of the importance of tribal participation to the care and management of the objects… and to ensure that management decisions affecting the monument reflect tribal expertise and traditional and historical knowledge.” 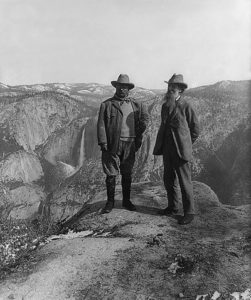 One of the reasons why the Antiquities Act was passed in 1906 was to enable a President to be able to protect public lands in very short order and create a monument without the need for negotiations with Congress or stakeholder input.

Congress can take decades to negotiate protection. The lands that became Bears Ears National Monument had been part of various proposals for protection for over 60 years, most recently within H.R.5780 – Utah Public Lands Initiative Act (PLI) introduced on September 22, 2016.

Although Obama could simply declare a monument under the provisions of the Antiquities Act, and had been asked to do so by the inter-tribal coalition, he told Utah lawmakers that he would wait for the outcome of the Public Lands Initiative Act. When the bill stalled and no comparable bill was introduced in the Senate, he sought additional stakeholder input. His teams organized hearings and meetings with Utah state and federal representatives and senators, conservation groups and members of the public. Interior Secretary Sally Jewell travelled to Utah in July of 2016 to meet with stakeholders in Bluff, a town adjacent to the proposed monument. The public hearing lasted for four hours and was attended by almost 2,000 people.

The designation was considered controversial even with significant input from stakeholders. In the weeks preceding the proclamation, lawmakers, local residents, and Native American groups protested for and against the creation of Bears Ears National Monument. For the most part, Native American groups, conservationists and archeologists heralded the move as a protection of American cultural heritage and the environment. State officials also did not welcome the creation of Bears Ears monument under the Antiquities Act because a monument designation would give greater control to the Federal Government – and in this case greater tribal control – of the designated land as opposed to state control. Opponents also saw the creation of the monument as limiting access to energy extraction.

Utah Republican lawmakers threatened to bring Trump to Utah to undo the designation, which he did on December 4, 2017 via Presidential Proclamation 9681. He invoked the Antiquities Act to diminish Bears Ears National Monument and replace it with two much smaller monuments, Shash Jáa and Indian Creek. As the Antiquities Act has no provisions to diminish a monument, only to create one – the power to reduce a monument is generally considered to be in the purview of Congress – the legality of this step by the President is currently being considered in federal court.

The US Bureau of Land Management solicited comments on planning for the Shash Jaa National Monument and the Indian Creek National Monument from August 17-November 15, 2018. There were comments submitted by over 200,000 Bears Ears supporters asking for planning to be halted until the legality of President Trump’s reduction of the monument can be decided in the courts.

[ii] E.g., Exec. Order No. 13,175. For a history of the legal origins of the federal-tribal relationship and how it evolved into the consultation duty, see Colette Routel & Jeffrey Holth, Toward Genuine Tribal Consultation in the 21st Century, 46 U. Mich. J.L. Reform 417 (2013); Robert J. Miller, Consultation or Consent: The United States’ Duty to Confer with American Indian Governments, 91 N.D.L. Rev. 37 (2015)”.