History Politicized and Appropriated: Museums fight back against Chinese censorship. 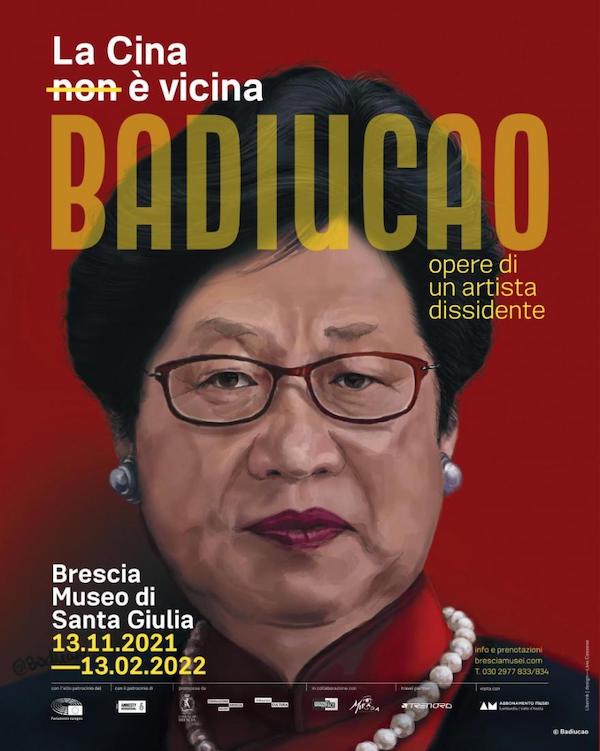 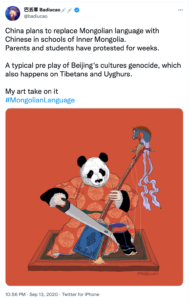 In the hands of dictators, tools that enable digital communication are used for surveillance and to suppress criticism. Despite the ubiquity of cellphones and digital communications, when an “approved” political message is omnipresent, getting the true story out can be harder than ever.

Certainly, reporting from and on countries ruled by dictators becomes more hazardous each year. Egypt, Turkey, China and Saudi Arabia are the most dangerous countries to be a journalist in today. Today’s autocrats are fixed on controlling the historical and cultural narrative because identity politics based upon ‘heritage’ are extremely effective.

In October 2021, China tried to pressure Italian officials to cancel an exhibition by dissident Chinese artist and cartoonist Badiucao that is set to open November at the Museo di Santa Giulia in Brescia, Italy, that it claims is “full of anti-Chinese lies.” The exhibition, titled “China is (not) near: Badiucao” will open November 13, 2021 in Brescia, despite China’s attempted censorship.

Badiucao now lives in Australia. He is one of China’s best known political cartoonists, a versatile artist previously known in the West for his cartoon sketches. A number of these show General Secretary of the Communist Party Xi Jinping punishing or plugging a helpless Winnie the Pooh, who Xi dislikes being compared to. Referring to Winnie the Pooh on Chinese social media is now harshly punished. Of course, Badiucao’s work can’t be seen in mainland China or even, these days, in Hong Kong. His October 2018 Free Expression Week solo exhibition in Hong Kong, “Gongle 共歌”, had to be cancelled due to threats to him and to his family.

In an interview with Matteo Damiani, Badiucao was asked:

“What happened in Hong Kong last year before your exhibition? Why it was canceled?”

“Well, it’s very simple. I found out my identity was compromised, the police found my family there, they get my relatives to the police station, they send via family member messages to me, they wanted the show to be canceled, otherwise they had to do things to me and to my family, they also said that “if you choose to continue the show, we will send policemen to the opening in Hong Kong”.”

In some ways, the Chinese government’s attempts to silence the artist have backfired and resulted in even greater notoriety and popular recognition. They have also encouraged him to give up his anonymity and speak out publicly (he was becoming known as the “Chinese Banksy” and didn’t relish that anyway).

China’s embassy in Italy sent a letter demanding the exhibition be cancelled to Brescia’s mayor, Emilio del Bono. He allowed it to be published in the local newspaper. While asserting Brescia’s friendship for the Chinese people, the mayor and cultural officials have made clear that they reject censorship. The director of the Brescia Museums Foundation, Stefano Karadjov, told the Art Newspaper that he hasn’t yet received any response from the embassy. 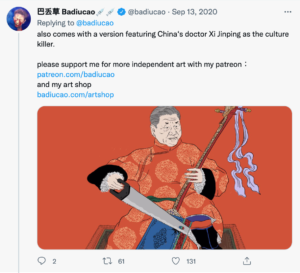 This is not the first European exhibition that the Chinese government has attempted to censor. Last November, this effort spread overtly into cultural exchange, when Bertrand Guillet, Director of the Chateau des Ducs de Bretagne’s Musée d’Histoire de Nantes announced that the museum was making an ethical decision to postpone a long-planned exhibit on Genghis Khan. The Chinese Bureau of Cultural Heritage told the Nantes museum that the name “Genghis Khan”, the words “Empire” and “Mongol” should be removed from the exhibition’s signage, didactic, maps and programming. The Bureau provided a substitute for the exhibition plan that, according to the museum, resulted in “the complete disappearance of Mongol history and culture in favor of a new official narrative.”

The Nantes museum declined to accept loaned artworks and historical material from China, replaced it with loaned works from other French and international museums, and kept the world conqueror’s name prominently in the title: Fils du Ciel et des Steppes: Gengis Khan et la naissance de l’Empire mongol (Son of Heaven and Steppes: Genghis Khan and the birth of the Mongol Empire).

These attempts to redefine China’s past internationally are only a pale reflection of the steps China’s government has taken in China’s Inner Mongolia province to both excise and Sinicize the Mongolian conqueror Genghis Khan. China’s domestic moves in Mongolia have paralleled steps already taken by its government in Tibet and Xinjiang. The Chinese government’s latest goal is to expunge an overtly Mongolian ethic identity and cripple traditional belief systems. 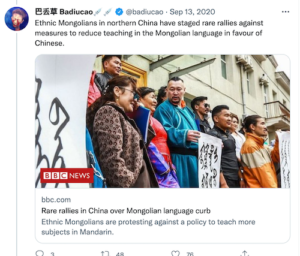 In Inner Mongolia, repression of Mongolia’s past and forced assimilation into a Han or blended identity is now widespread. In some cases this involves removal of statues and plaques honoring Genghis Khan; traditional cultural expression in music and performance has been modified to create a new narrative that adds in Han elements. Much effort is directed towards Mongol youth and in eliminating the Mongolian language itself from the coming generation. Schools that taught bilingually in the past (as required by China’s constitution) moved to an all-Chinese curriculum this September. Mongolian content is routinely stripped from social media and children’s television and cartoons are available only in Han Chinese.