Ahmet Davutoğlu, is the 26th Prime Minister of Turkey and the leader of the Justice and Development Party (AKP). He previously served as the Minister of Foreign Affairs from 2009 to 2014. This caricature of Ahmet Davutoğlu was adapted from a photo in the public domain from from the U.S. Department of Defense. Image: DonkeyHotey, Wikimedia Commons.

The Istanbul branch of Turkey’s Association of Archaeologists responded with outrage when the ruling Justice and Development Party nailed a giant election poster with the face of Prime Minister Ahmet Davutoglu into the Aqueduct of Valens. 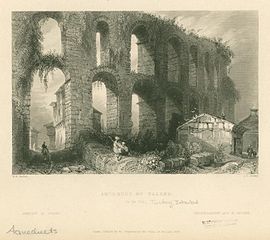 The archeological group stated that, “The banners nearly completely close the two fronts of the aqueduct’s structure. We have seen that a large number of screws and nails were secured into the stone blocks of the structure by metal tools…The banner not only causes physical damage to the structure but also covers up an important part of the city’s cultural heritage and has a negative affect on the perception of cultural assets.” The banner stretched the length of the aqueduct where it crosses Istanbul’s main arterial into the city, Ataturk Bulvar. The 971 meter aqueduct crosses the valley between the hills where İstanbul University and the Fatih Mosque are located today.