Home > Global Art > Will Iraqi Jewish Heritage Stay in US?

Will Iraqi Jewish Heritage Stay in US? 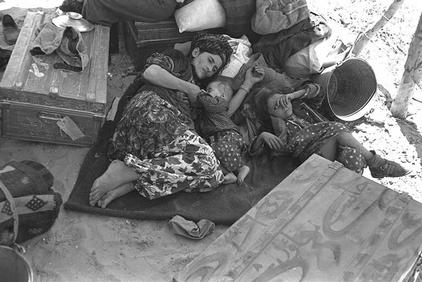 “These invaluable cultural treasures, like a prayer book and Torah scrolls, belong to the people and their descendants, who were forced to leave them behind as they were exiled from Iraq. The State Department should make clear to the Iraqi government that the artifacts should continue to stay in the United States.”    Senator Charles Schumer

In mid-July Senator Pat Toomey (R-PA) introduced a non-binding resolution “strongly recommending that the United States renegotiate the return of the Iraqi Jewish Archive to Iraq.” Senate Resolution 577 calls on the US State Department to negotiate with Iraq to keep the archive in the United States where it can be preserved, accessed and enjoyed by the Iraqi Jewish community in diaspora as well as by scholars. The proposed resolution is an important, but symbolic, part of a larger effort to renegotiate an agreement that could have compelled return of the Iraqi Jewish Archives to Baghdad.

There are reports that the Department of State has been negotiating for the Iraqi Jewish Archive to remain in the United States past the September return date, according to Times of Israel correspondent Josefin Dolsten. Passage by the Senate of the proposed resolution would reinforce the message to the State Department and to Iraq that the archive should stay in the US.

The Senate resolution is part of a broader effort involving Jewish groups, lawmakers, advocates, and the State Department to retain the Iraqi Jewish Archive in a place where it can be protected and accessible for Jewish groups and researchers.

Questions of Ownership, Care and Use of the Archives for Political Purposes 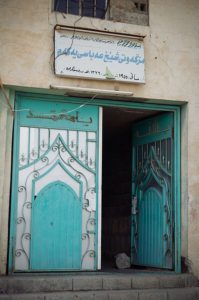 ‘Mosque of the Jews’ in Sulaymaniyah is a synagogue used as a mosque since the forced expulsion of Iraqi Jewry. Photo Levi Clancy, 2017 via Wikimedia Commons

Iraqi officials say that the archives are part of Iraq’s national patrimony and that the return of the archive will allow Iraqis to learn about the history of the Jews there.

Iraq’s ambassador to the United States, Fareed Yasseen, argues that the Jewish objects should be returned in order to create an exhibition memorializing Saddam Hussein’s abuses of Jews and other minority peoples in Iraq, and recording the broader history of Iraqi Jews.

An exhibition demonstrating Iraq’s history of mistreatment of its Jewish population would be a positive and educational step. However, opponents to the Iraqi plan feel that the Jewish community’s property should not be used for the political aggrandizement of the current government. Such an appropriation of the materials would be particularly objectionable if, as seems possible, the exhibition helps the current government to distance itself from Hussein’s crimes without addressing the much longer history of abuses of the Jewish community that led to a mass exodus of the majority of the Iraqi Jewish population years before Hussein seized power.

Advocates for keeping the archive in the United States also cite to Article 17 of the Universal Declaration of Human Rights, which states that “…Everyone has the right to own property alone as well as in association with others. No one shall be arbitrarily deprived of his property.”  They say that these objects are the personal and communal property of people who were driven out; they no longer live in Iraq.

Despite some recent inroads into past bans on the ability of Jews to travel to Iraq, it is still extremely difficult for former Iraqi Jews and Jewish scholars to visit the country. Some say that it is far better for the archive to be in the United States where access to their heritage can be assured, than for it to be returned to Iraq, which is still hostile to the people whose history the archive records.

Others have expressed concerns about how the items would be cared for if returned to Iraq. Gina Bublil-Waldman, President of Jews Indigenous to the Middle East and North Africa (JIMENA) told journalist Rafael Hoffman in late July of this year, that “[Iraqi officials] have never presented an official plan for how they would protect it, and if they are so concerned with Jewish heritage, then why are they still keeping over 300 Torahs decaying in the damp basement?” Waldman refers to Torah scrolls that are still held in a vault in the Iraq Museum in Baghdad. 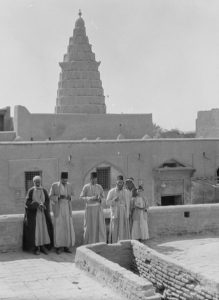 Ezekiel’s Tomb, located in Al Kifl, Iraq, is believed by Jews and Muslims to be the tomb of the biblical prophet Ezekiel. G. Eric and Edith Matson Photograph Collection; Library of Congress, 1932

Commentators have sought guidance in the current situation from the recent return to Iraq of objects stolen from Tello, an archeological site in southern Iraq, seized from a London art dealer in 2003. They were delivered to the British Museum by the London Police earlier this year, were immediately identified as looted from the Tello site, and then returned to Iraq on August 10, 2018.

Tello is the site of the remains of the ancient Sumerian city of Girsu. The British Museum uses the site for training for their Iraq Emergency Heritage Management Training Scheme, whose participants acquire the “expertise and skills they need to face the challenges of documenting and stabilizing severely disrupted and damaged heritage sites in preparation for potential reconstruction.” As soon as the distinctive clay, gypsum and quartz objects were handed over to the British Museum, museum staff recognized them as coming from Tello and began working on their return.

Unlike the objects and artifacts in the Iraqi Jewish Archive, which were seized from a synagogue by Iraqi secret police, the objects from the Tello site were very clearly looted from the Iraqi archaeological site, and there was no question regarding their return to Iraq, hopefully to a museum facility near to their find-site. To make a direct comparison between the return of the objects from Tello and the return of the Iraqi Jewish Archives is to ignore that they were personal property or property of the Jewish community, and that they belonged to individual members of the community who were forced to leave Iraq and their possessions behind.

A Brief History of the Iraqi Jewish Archive 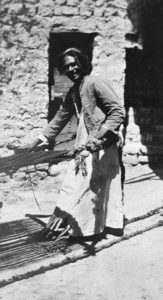 Photograph by a British Officer from 1918 of a Jewish weaver in the  town of Ramadi in the middle Euphrates region of Iraq, weaving a typical goat-hair tent material used by the Bedouin tribes of Mesopotamia and the Syrian desert to the west. “… about 150 Jews have lived in the town together with the Moslems and have had their own synagogue”. observations in 1912, by Alois Musil, AMS Press, New York. Wikimedia Commons

What was later dubbed the “Iraqi Jewish Archive” is a trove of books, Sifrei Torah, rabbinical writing and other religious, personal and institutional documents. Materials in the archive cover over 500 years of Jewish history in the area now known as Iraq. After 1934, with the rise of fascism worldwide, the Jewish communities in Iraq and throughout the Middle East were increasingly persecuted and eventually expelled. Over 120,000 Iraqi Jews left the country between 1950 and 1952 in the airlift Operation Ezra and Nehemiah. Important documents, personal and religious effects were sometimes stored in synagogues for safekeeping. Such was the case for the items now constituting the Iraqi Jewish Archive.

By 2004, there were only 35 people of Jewish heritage left in Iraq. The expelled Jews fled with very little, allowed to take only a small suitcase and the clothes they were wearing. The personal and community records that had been left for safekeeping in a Baghdad synagogue were ultimately seized from it in the 1980s by Iraqi secret police and stored in the police intelligence headquarters in Baghdad. The trove was discovered in 2003 in very poor condition in the waterlogged basement of the intelligence headquarters. The materials were then brought to the United States for restoration and preservation at the U.S. National Archives.

Ten years later the National Archives had painstakingly restored, repaired and digitized the contents of the Iraqi Jewish Archives, and some parts were exhibited in a show called Discovery and Recovery: Preserving Iraqi Jewish Heritage that traveled to multiple cities around the United States.

Some of the most notable (and obviously personal) pieces of the 27,000 piece collection include a Hebrew Bible with Commentaries from 1568, a Babylonian Talmud from 1793, a Torah scroll fragment from Genesis – one of the 48 Torah scroll fragments found, a Zohar from 1815 (a text for the mystical Jewish movement known as Kabbalah), an official 1918 letter to the Chief Rabbi regarding the allotment of sheep for Rosh Hashanah (the Jewish New Year), materials from Jewish schools in Baghdad, including exam grades and a letter to the College Entrance Examination Board in Princeton regarding SAT scores, a Haggadah from 1902, hand lettered and decorated by an Iraqi Jewish youth, and a lunar calendar in both Hebrew and Arabic from the Jewish year 5732 (1972-1973) – one of the last Hebrew-printed items produced in Baghdad.

Senate Opposition to Return to Iraq 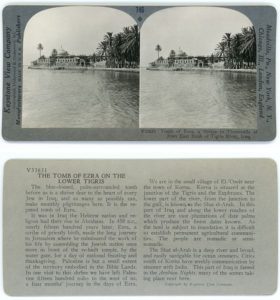 The planned return of the Iraqi Jewish Archive to Iraq highlights a basic flaw in U.S. cultural property policy: the Department of State has time and again recommended policies that give absolute ownership of the cultural property of religious and ethnic minority communities to the governments that have persecuted them in the past.

Because of the historic persecution and eventual destruction of the Jewish community in Iraq, Senator Pat Toomey has introduced Senate Resolution 577 (S.Res.577) – A resolution strongly recommending that the United States renegotiate the return of the Iraqi Jewish Archive to Iraq.

The proposed resolution calls on the Senate to urge the State Department and its Bureau of Educational and Cultural Affairs to renegotiate the agreement with the Iraqi government to allow the archive to remain in the safe-keeping outside of Iraq for the long-term.

To that end, it demands that the Senate formally recognize the importance of the Jewish Archive and the need for it to be both protected and made available for study and public engagement. It also asks the Senate to consider the fact that the archive material’s origins in a period of governmental persecution of Iraqi Jews were not known when the original agreement to return the artifacts was made. Finally, the resolution calls for a re-affirmation of the United States’ commitment to honoring international cultural property law and to “ensuring justice for victims of ethnic and religious persecution.”

Senators Richard Blumenthal from Connecticut, Charles Schumer from New York and Marco Rubio from Florida are cosponsors of Senate Resolution 577 (S.Res.577). The resolution was referred to the Senate Foreign Relations Committee on July 18, 2018, and is currently awaiting action from that committee.