Home > Analysis > “Who ordered the borscht?” When a State Steals Culture, Others Pay the Bill.

“For the Kremlin, history is not something to be studied and remembered. It is something that must be controlled to justify Russia’s current actions.” Sea Monster with two tails, found at the Greek colony of Pantikapaion on the eastern shore of Crimea. Allard Pierson Museum photo.

The UNESCO World Heritage Committee still plans to meet in Kazan from June 19-30, despite calls from heritage professionals around the world to relocate the meeting in light of Russia’s invasion of Ukraine. UK culture minister Nadine Dorries announced that if the meeting is held in Russia, “the UK will not be attending.” The European heritage group Europa Nostra stated that the “2022 session of the World Heritage Committee cannot be chaired by Russia and cannot take place in Kazan,” pointing to

“the brutal invasion by Russia’s army of Ukraine, an independent and sovereign country in Europe, with the loss of numerous human lives, including civilians and children, the massive destruction of historic cities and the serious damage to invaluable cultural and natural heritage in this country, due to deliberate attacks by Russia’s army which violate the provisions both of the 1954 Hague Convention for the Protection of Cultural Property in the Event of Armed Conflict, and of the 1972 UNESCO World Heritage Convention.”

Europa Nostra issued a letter calling for Russia’s removal that was addressed to all Ambassadors and Permanent Delegates of the 21 countries currently representing the States Parties to the Convention and to UNESCO Director General Audrey Azoulay. Europa Nostra’s Secretary General, Sneška Quaedvlieg-Mihailović, hand delivered the letter to Lazare Eloundou-Assomo, Director of the World Heritage Centre on March 15, 2022.

According to UNESCO, there is no move yet to change the meeting location. A decision to move it would require a special vote that could only be called by a two-thirds majority of the 21 World Heritage Committee members. The current committee members are Argentina, Belgium, Bulgaria, Egypt, Ethiopia, Greece, India, Italy, Japan, Mali, Mexico, Nigeria, Oman, Qatar, Russian Federation, Rwanda, Saint Vincent and the Grenadines, Saudi Arabia, South Africa, Thailand, and Zambia.

Rogneda of Polotsk, Vladimir I of Kiev and Izyaslav of Polotsk. 15th C. Wikimedia Commons.

UNESCO’s reluctance to criticize its member States is well-known. (How else could both the UN and UNESCO have failed for years to condemn as genocide the wholesale incarceration in concentration camps of a million of China’s Uyghur population or China’s admitted destruction of some 15,000 historic and religious sites in Xinjiang?)

Russia’s illegal annexation of Crimea in 2014, the removal of art from its museums to Russia, and neglect of Crimean historic sites ought to have been sufficient for UNESCO’s World Heritage Committee to disbar Russia as chair in 2021 and to refuse to meet in Kazan. Only after the UN General Assembly affirmed the sovereignty and territorial integrity of Ukraine within its internationally recognized borders did UNESCO make a statement about the taking of Crimean treasures to Russia and the neglect of Crimean heritage sites, including the Ancient City of Tauric Chersonese.

In his ‘Crimean Speech’ in March 2014, Putin identified Chersonesus as Russian, not Ukrainian heritage, and specifically referred to its sacred significance as the baptismal font of the Russian people. In Putin’s eyes, a country that separates itself culturally as well as politically from its Rus ancestors must be brought back into the fold. Putin’s vision is still focused on the myth linking together today’s Belarus and Ukraine as an intrinsic part of the ancient Rus, headed by Russia, of course. He ignores valid arguments for its Kyivan, Ukrainian foundations. His government has a longstanding policy of revising ancient history as a sophisticated form of disinformation. Creating false histories isn’t just great domestic propaganda, it can also be a justification for military aggression.

Meeting in Kazan would not only validate Russia’s actions in Crimea and greater Ukraine, it would give UNESCO’s blessing to Putin’s and other dictators distortion of history for political purposes. It would acknowledge openly that despite its supposed global perspective, so far as UNESCO is concerned, culture is national, not international, and that art is at the service of the state.

Not the first time UNESCO has failed to take a stand…

Again and again, by refusing to hold State Parties to account, UNESCO has failed to honor its commitment to “promoting the role of shared cross-border heritage and initiatives to build bridges among nations and communities,” a key element of UNESCO’s Medium Term Strategy for 2014-2021. In reality, UNESCO is engaged in a constant ‘performance’ of neutrality, clinging determinedly to the pretense that all is for the best if “we can all just get along.”

Other countries that have engaged in violent repression – combined with excision of the historical record and the wholesale eradication of culture – have been honored rather than condemned by UNESCO’s hierarchy. Sometimes major money is in play. In 2019, UNESCO’s World Heritage Committee met in Baku, the capital of oil-rich Azerbaijan. The committee’s Chairman was Abulfaz Garayev, also Azerbaijan’s Minister of Culture. UNESCO had built a cozy relationship with the Azeri regime for more than a decade; in 2010, UNESCO Director General Irina Bokova presented Vice-President Mehriban Alieva, the wife of Azerbaijan’s President Ilham Aliev, with UNESCO’s high honor, its Mozart Medal.

In 2013, an exhibition at UNESCO’s Paris headquarters, Azerbaijan – A Land of Tolerance, opened four months after Azerbaijan presented UNESCO with $5 million dollars, helping to offset a serious budget shortfall after the U.S. stopped making payments to the organization in 2011. 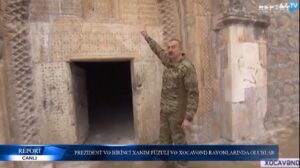 President of Azerbaijan, Ilham Aliev, during his visit to Nagorno-Karabakh in March 2021. He is pointing at the Armenian inscription on the tympanum of a 12-17th century church in Tsakuri/Hunerli village and calling it fake. He also calls the church “our ancient historical monument“ and promises to restore the “ancient Albanian temple.” This means erasing the Armenian inscriptions, which has been already done during a number of church “restorations” in Azerbaijan. The oldest inscription from this church is on a khachkar mentioning the year 1198 (ՈԽԷ in Armenian numerals). The inscription on the tympanum says “…I [Vardapet (abbot) Hakob] reconstructed the former church… in 1682.”

Yet Azerbaijan’s President Aliev, who assumed office in a 2003 election marked by serious fraud, has been a major cultural destroyer, following in the steps of his father, Heydar Aliev, with an aggressive program to annihilate the record of Christian culture in Nakhichevan, a formerly Armenian Christian region occupied by Azerbaijan. In many towns and villages of the disputed territory, the land on which Orthodox Christian churches, cathedrals, and graveyards once stood are now barren empty spaces or the sites of brand-new mosques. What remains of Nakhichevan’s Orthodox Christian culture has been eliminated by an officially mandated cultural erasure over the last 18 years. The destruction is both physical and intellectual. At the same time that Christian monuments in the enclave of Nakhichevan have been bulldozed and inscriptions smashed with hammers, the regime has rewritten history and removed access to records of Orthodox Christian culture dating back to the medieval period, substituting an entirely invented narrative of an ancient indigenous “Albanian” culture, an archaeological myth.

In 1998, the Azeri government had ordered the first massive destruction of ancient Armenian khachkars, the towering and beautifully carved headstones once found in the thousands in Djulfa, Nakhichevan. UNESCO delayed even protesting until 2002.

Then, in December 2005, Azeri military descended on the Djulfa cemetery, taking a week to smash every one of the remaining khachkars with sledgehammers, load the fragments onto trucks, and dump them into the river that marks the international border with Iran. Within a few months, the ancient cemetery had been made into a firing range for soldiers. Despite pleas from the Armenian government and international non-governmental organizations, UNESCO did not speak up to stop this final destruction of the last of Nakhichevan’s khachkars.

Thus, just as it honored the Aliev regime in Azerbaijan as the “tolerant” hosts of the 2019 World Heritage Committee meeting in Baku, UNESCO appears ready hold its next meeting in Kazan, papering over the Russian government’s egregious violations of the UNESCO World Heritage Convention in its illegal taking of World Heritage sites and cultural treasures in Crimea, and now, Russia’s brutal invasion of Ukraine.

[For much more on Azerbaijan’s history of manipulation of the international press and co-option of UNESCO, see, “UNESCO Exposed! World Heritage Committee Meeting in Baku Will Be Hosted By Cultural Destroyers,” Cultural Property News, March 19, 2019. Azerbaijan continues its campaign of destroying the historical and cultural record of ancient and medieval Armenians today.]