The restrictions, which are intended to cover ‘significant’ objects under the Cultural Property Implementation Act include:

“G(3). Rope—Rope and string were used for a great variety of purposes, including binding, lifting water for irrigation, fishing nets, measuring, and stringing beads for jewelry and garments.”

Author Peter K. Tompa, writing in Cultural Property Observer, assesses the impact of a newly signed Memorandum of Understanding between the U.S. and the People’s Democratic Republic of Algeria. 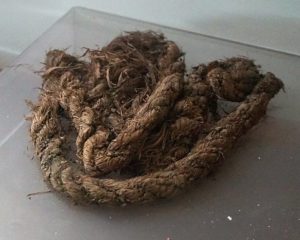 The U.S. State Department has approved a MOU and import restrictions on behalf of Algeria’s authoritarian government. The restrictions were announced in a Federal Register notice on August 16, 2019.

Once again, the designated list is extremely broad. In what has to be a first, import restrictions have even been imposed on rope!

Both coin collectors and Jewish groups will once again be disappointed.  Import restrictions have been applied on virtually all coins that were made or circulated within Algeria down to 1750, including those made outside the confines of what is now Algeria by the Carthaginians, Byzantines, Ottomans and Spanish.  While there are no explicit restrictions on artifacts of Algeria’s displaced Jewish population, certain categories like “manuscripts” may nonetheless encompass Jewish religious artifacts like Torahs.

Import restrictions have been particularly hard on coin collectors and the small businesses of the numismatic trade because most collector’s coins (which typically are of limited value) lack detailed provenance histories necessary for legal import. This has greatly damaged the legitimate trade in such items with fellow collectors, especially from within the EU.  Here, if anything, the problem will be exacerbated because Algeria was a French colony for such a long time. Many artifacts must have left Algeria for France during this period lawfully, but with little documentary proof.  Often such material does not have a solid provenance, and cannot be legally imported under U.S. Custom and Border Protection procedures. 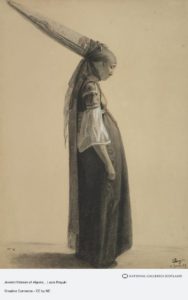 A Jewish woman of Algeria, by Louis Roguin, National Galleries of Scotland.

The restrictions on coins from the Federal Register announcement include:

The Department of State also issued a press release announcing the imminent signing of the MOU.

See also, We Don’t Need No Algerian Blockade; Against Jewish Protests, State Department Seeks to Add Another Brick in the Wall, Cultural Property News, July 12, 2018, noting that the only U.S. market for items of Algerian heritage is for items of Jewish heritage.