US Blocks Import of Art and Artifacts from Libya

US Will Send Ancient, Islamic, & Ottoman Art Back to War-torn Libya, Including Jewish and Christian Heritage 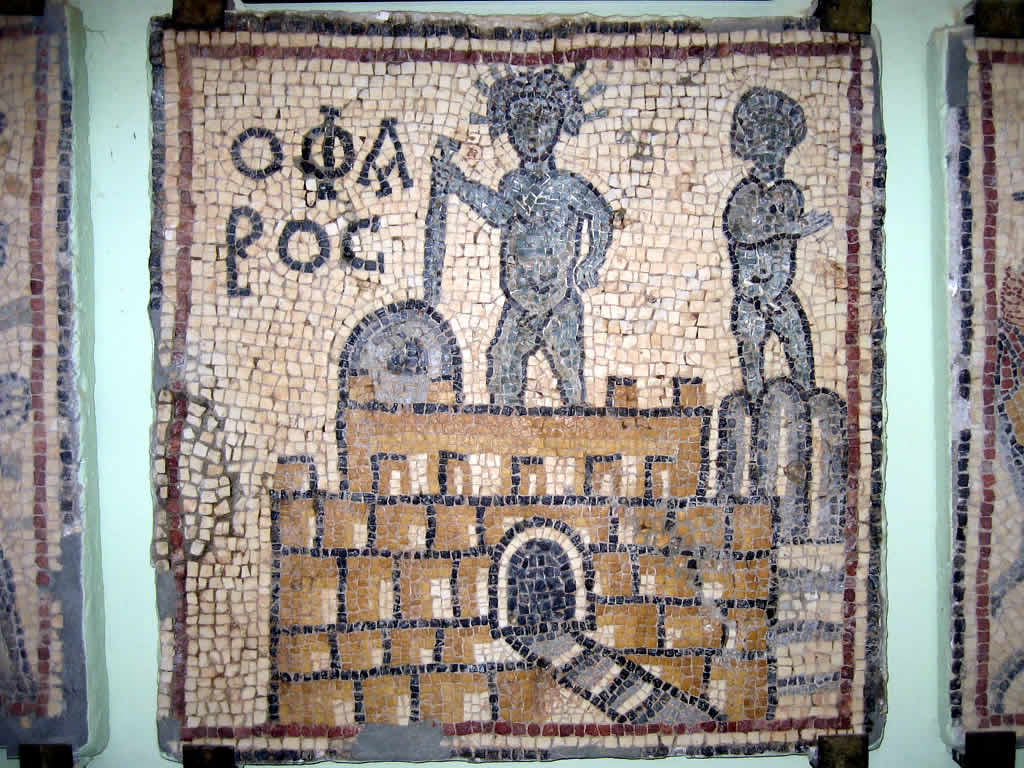 Above: A 6th century mosaic at Qasr Libya depicting the ancient lighthouse of Alexandria. David Stanley from Nanaimo, Canada, 22 December 2010.

Emergency Restrictions on import of objects into the United States from Libya were announced on December 5, 2017. Objects of material culture from Libya will be blocked from entry to the U.S. until at least May 30, 2022. The list of prohibited items ranges from architectural items to statuary, furniture, inscriptions, tools, weapons, jewelry, seals and beads, vessels and containers, coins, glass, textiles, books and manuscripts, musical instruments, and more. The list runs more than five pages in the Federal Register, yet is still considered merely illustrative rather than comprehensive. U.S. Customs can seize anything similar or related to the restricted objects.

Objects restricted from entry to the U.S. would be deemed cultural property under the ownership and control of the Libyan government and returned to Libya.

This is the fourth time that Jewish and Christian artifacts have been included in import restrictions (known as Designated Lists) that give ownership of their heritage to Middle Eastern nation that expelled and persecuted their communities. Jewish manuscripts, personal property such as furnishings, art, and heirlooms have already been specifically included in U.S. cultural property agreements with Iraq, Syria, and Egypt. Although Torahs are not specifically mentioned in the Libyan Designated List, they are still covered by its terms, as are manuscripts in general and “containers for Islamic, Jewish and Christian manuscripts,” and ornaments from “synagogues and churches.”

The time period covered in the restrictions is also incredibly broad, amounting to virtually the entire history of material culture in Libya:

The original request from Libya was not made available to the public; a summary was prepared by the Department of State. The summary request, which specifically mentioned Jewish artifacts and religious objects, was strongly objected to by representatives of American Jewish organizations. 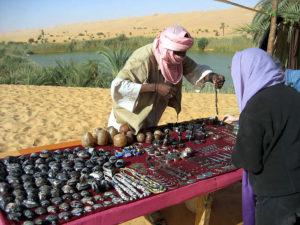 There were also objections to the inclusion of Tuareg ethnographic materials in the Libyan request. These consist of ordinary household objects, jewelry, leather and textiles, which have been made for trade for centuries. The Tuareg objects listed were made by a Saharan group of nomadic traders that has a small Libyan component, but which is found in far larger numbers in eight other nations. They are common articles of the antiques trade and are sold by Tuareg from many nations as folk items.

Despite receiving testimony about preserving rights to heritage of minority populations that have been forced out of the country without their possessions, such as Libya’s Jewish and Christian populations, or minorities subject to severe discrimination, such as the Tuareg, the Administration and Department of State have recognized the Libyan government’s ownership and control over artifacts from these communities. This same Libyan government has sponsored construction of hotels and malls on top of Jewish cemeteries, prohibited Jews from returning to rebuild Jewish synagogues, and allowed looting of archaeological sites and government’s museums by its own soldiers.

The Libyan agreement is another slap in the face to American Jews of Middle Eastern descent, who are faced with the State Department’s insistence that the Jewish community’s archives seized by Saddam’s secret police and rescued by U.S. military will be returned this year to the Iraqi government.

It should be noted that agreements under the Cultural Property Implementation Act are hardly temporary. Every Emergency Restriction entered into in the history of the Act has subsequently been renewed as a bilateral agreement, every five years. The U.S. has nearly complete blockades on entry of art from 17 counties. Some agreements that began as “emergencies” have now been in place for almost 30 years. 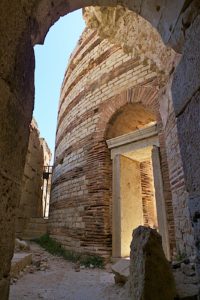 Libya’s request for import restrictions had been challenged as failing to meet any of the criteria for import restrictions set by Congress under the Cultural Property Implementation Act. Even the Public Summary of Libya Request drafted by the Department of State (the original request by Libya was never provided) acknowledged that there was no government capable of administering cultural heritage in much of the country. The State Department summary stated that:

Despite the serious concerns raised by these admissions, notice of the Libyan request was fast-tracked and appeared to be designed to slip through under the radar – instead of the usual several months allowed for public comment, the request was announced the day before the 4th of July holiday and written comments had to be submitted within 5 days in order to be heard by the Cultural Property Advisory Committee at the Department of State. At the one hour-long, single public hearing, the committee asked no questions of speakers who raised serious questions about the request, or regarding the evidence showing that the most minimal criteria for self-help was not met, or the damaging effect restrictions would have on Americans of Libyan background in accessing their heritage.

Another Step Closing Off Middle East Art to US?

There are many ways of viewing the Libyan Emergency Restrictions. Most obviously, Libya joins other Middle Eastern nations (Iraq, Syria, Egypt) whose art and artifacts are essentially banned from importation into the U.S. through comprehensive import restrictions listing virtually every type of artifact over millennia, regardless of the lack of care and preservation these governments have shown, and despite placing authority and control over many minority people’s heritage in the hands of governments that have tried to destroy them.

Why was Libya, a country with at least three competing governments and little interest in preserving its heritage, considered a viable candidate for an MOU with the United States in the first place? Certainly Libya is suffering a cultural crisis, and its arts institutions and museums have collapsed – but what Libyan institutions need is help on the ground – immediate assistance with documentation and guarantees of safe harbor for whatever can be protected, either in country or temporarily stored outside of it.

Since there was no evidence presented of a current market in Libyan artifacts in the U.S., the reason for the MOU request may simply be that Libya was seen as a crisis situation to be exploited by anti-trade activists. Libya was available to be plucked and added to the list of Middle Eastern nations whose art cannot be imported into the US – closing off imports from yet another crucible of civilization, as Central America, Italy and Greece have been closed off for twenty years. There has been an overwhelming bias against art collecting and museums at the State Department for the same time, and relatively new players in the cultural property game such as the Antiquities Coalition have publicly advocated for closing off access to Middle Eastern art through the execution of import agreements across the region.

A Trade-off for Anti-Terrorism Cooperation?

Theatre of the Roman city of Sabratha in Libya. Photo: Duimdog, 2006.

Given Libya’s state of chaos, and the spectacular failures of its several different governments to protect monuments or preserve artifacts, how was an agreement that flopped every Congressional test justified?

It is possible that access to art in the U.S. has been traded off as a gesture to Middle Eastern nations that are U.S. partners in anti-terrorism efforts. Libya may care little for its heritage, it may be one of the world’s most vicious abusers of human rights in its treatment of refugees captured while attempting to cross its territory and the Mediterranean to reach Europe, it may defile churches and synagogues and loot its own museums with impunity, but it’s a U.S. partner nonetheless. As a U.S. partner, Middle Eastern nations can always use positive publicity, and all have found cultural heritage claims to be useful as both domestic and international propaganda. (Certainly, the only time in decades that Assad had positive press coverage was when his troops retook Palmyra from ISIS – only to abandon it a few weeks later and then blame the U.S. for its loss.)

Brent McGurk, Special Presidential Envoy, Office of the Special Presidential Envoy for the Global Coalition to Counter ISIS, wrote on December 29, 2017, in a Letter to D-ISIS Coalition Partners on the Progress of the Past Year, the U.S. welcomes new North African and sub-Saharan alliances, “as we support our partner Libya as it rebuilds after successful operations to oust ISIS from Sirte.”

For more in-depth coverage of the Libyan request for import restrictions into the US, and similar agreements with Syria, Iraq, and Egypt, see:

Libya Requests US to Send Artifacts Back to War-torn Libya, June 30, 2017