U.S. Turkey Blockade on Artifacts and Art from 1,200,000 BCE to 1923 Reveals Flaws in Cultural Heritage Administration 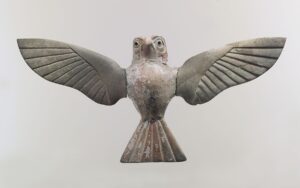 In the very last hours of the Trump administration, the United States signed a Memorandum of Understanding (MOU) restricting the importation of art, artifacts and antiques from the Republic of Turkey into the United States. The last minute signing was widely seen as denying the incoming Biden administration an opportunity to review this controversial agreement.

The stated purpose of the MOU is to “reduce the incentive for pillage of irreplaceable archaeological and ethnological material representing Turkey’s cultural heritage.”

MOUs generally organize objects by the date and the materials of which they are made. A Designated List, which is not yet issued, will provide expanded descriptions of the types of objects covered. The Turkish MOU will restrict entry (without a license, which Turkey does not issue for antiquities) for archaeological material made of stone, metal, ceramics, plaster, painting, glass, wood, textile and other organic material ranging in ages from 1,200,000 BCE to 1770 CE. It will also restrict import of ‘ethnological material’ made of stone, metal, ceramics, plaster, stucco, painting, glass, wood, textile, leather and parchment, and other organic material “from the 1st century AD to 1923.”

Turkey will use its “best efforts” to protect its cultural patrimony, to engage with other countries to halt trade in archaeological and ethnological material from Turkey, and to promote appreciation of Turkey’s cultural heritage.

What the MOU does not say: it’s about repatriation and politics.

The Turkish newspaper Hürriyet Daily News quoted Turkish Culture and Tourism Minister Mehmet Nuri Ersoy, who acknowledged that the chief benefit of the Turkish MOU was that demands for repatriation of Turkish objects from the U.S. would be much simplified by the agreement:

“This important document, which will also constitute a legal basis for operations of the U.S. law enforcement units, will bring active results. Legal struggles that last for years with enormous costs will be concluded in a very short time and with low costs. This is the biggest deterrent we have.”

Well before the signing of the agreement, the State Department had been given notice by Congressman Christopher Smith, a New Jersey representative with a background in issues of human and religious rights, that there were serious problems with the proposed MOU with Turkey. When the State Department failed to give satisfactory answers, he followed up with a forceful letter to Secretary of State Mike Pompeo on December 31, 2020.

“Turkey has not met the preconditions in the CPIA for an MOU limiting the importation of cultural and religious property. Most significantly, Turkey has not met the requirement that “the State Party has taken measures consistent with the Convention to protect its cultural patrimony.” Turkey under President Erdoğan has waged a coordinated campaign of persecution of Greek Orthodox, Armenian Orthodox, Alevi Muslims and others, expropriating their cultural and religious patrimony, including the conversion of the churches of the Holy Saviour in Chora and Hagia Sophia from museums into mosques earlier this year, despite the near universal and global appeals to the contrary. The MOU will thus effectively legitimize these seizures, suggesting that the United States approves of these acts. The incongruity of Turkey’s request for an MOU, purportedly for the purpose of protecting the religious and cultural patrimony of cultural and religious minorities, is all the more pronounced given Turkey’s recently-heightened and aggressive campaign to suppress the rights of these communities in Turkey.” 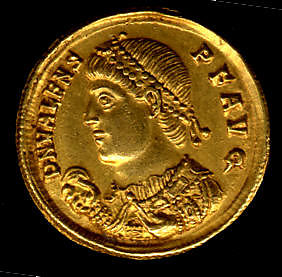 As Congressman Smith also noted, the agreement aligns the U.S. with President Recep Tayyip Erdoğan’s authoritarian government, which Smith says comes “at a time when Turkey has signaled its intent to act contrary to American interests.”

The U.S.-Turkey cultural property agreement was urgently sought by President Erdoğan, a strongman whose autocratic rule won favor with the last U.S. administration. Erdoğan made Turkish nationalism and Islamic revitalization a rallying cry for his Justice and Development Party. His AK Party is strongly nationalist and has tolerated verbal anti-Semitism and even physical attacks on members’ religious minorities.

By handing Erdoğan a diplomatic plum, the MOU leaves minority communities in Turkey even more vulnerable. “Congressman Smith was right to raise the alarm that any MOU with Turkey would be a de facto endorsement of the Erdoğan Government’s ownership and control of the cultural heritage of its displaced Greek, Armenian and Jewish populations,” Global Heritage Alliance’s Peter Tompa noted, saying that the  action “dismiss[ed] Congressional oversight over the State Department’s administration of the Cultural Property Implementation Act.”

The State Department decision to go forward with the MOU has alarmed important U.S. constituencies including Turkish Jews and the Armenian, Greek, Cypriot, Syriac, and Kurdish communities founded by minorities who suffered under Turkish persecution in the 20th century.

Response to the MOU in the U.S. was swift. 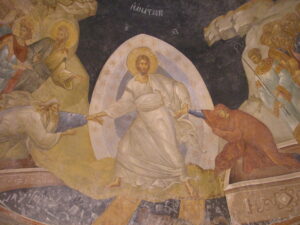 “It is unconscionable that the State Department, during the 11th hour of the Trump administration, would even consider entertaining, let alone agree to, such a proposal by the government of Turkey, in the light of its conversion of the Hagia Sophia and persecution of religious minorities within the country, as well as religious leaders such as the Ecumenical Patriarch. In this context, it is particularly insulting and absurd that the US government’s official press release announcing the agreement references “Turkey’s longstanding religious, ethnic, and cultural diversity’.”

Opposition was also voiced by the Armenian National Council of America (ANCA), Hellenic American Leadership Council (HALC), and In Defense of Christians (IDC) and a host of cultural rights and museum groups including the Association of Art Museum Directors (AAMD), the Committee for Cultural Policy (CCP), the Global Heritage Alliance (GHA), and the International Association of Professional Numismatists (IAPN).

Turkey is destroying, not protecting its cultural patrimony.

In testimony before the Cultural Property Advisory Committee at the State Department, which later recommended that Turkey be granted a U.S agreement, the Association of Art Museum Directors stated plainly that, “For many types of cultural property, an MOU will not curb looting and destruction because those actions are being carried out by the Turkish state itself.”[1] 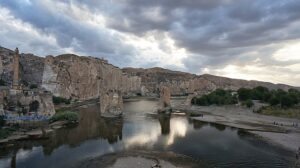 Examples include the following: the Turkish government has destroyed two World Heritage Sites at Diyarbakir, an important site in the Hellenistic, Roman, Sassanid, Byzantine, Islamic and Ottoman periods. Hundreds of thousands of people were displaced and 800 historic buildings and registered cultural monuments were bulldozed. The Armenian Catholic Church of Diyarbakir, a 1700-year-old Syriac Orthodox Church of the Virgin Mary and a Jewish synagogue where Elijah was thought to have become a prophet were destroyed during street fighting by Turkish troops. The deeply venerated Armenian Surp Giragos Catholic Church was ordered expropriated by the Turkish government in what observers called a ‘legalized robbery.’

A Turkish dam project has inundated the ancient site of Zeugma, on UNESCO’s Tentative List, where rushed salvage archaeology failed to preserve many of its ancient remains, including mosaics.[2] The town and surrounding regions of Hasankeyf, a World Heritage site containing more than 300 archaeological sites from the Prehistoric through the classical Byzantine, and Ottoman periods, are today submerged under the waters of the Ilisu Dam.[3] Just a few years ago, Turkish military bombed into rubble one of the most important Hittite sites in the world, Ain Dara, just across its border in Syria.[4]

Dr. Elizabeth Prodromou, formerly on the US Commission on International Religious Freedom said that the Turkish MOU was “a surreal moment in U.S. foreign policy… well-documented and extensive evidence by cultural heritage experts leaves no doubt that the state of Turkey is the single greatest threat to that country’s cultural heritage.”

The Turkish agreement would ban entry to the U.S. of the religious and community heritage of exiled peoples; Armenians, Greeks, Jews, Orthodox and Syriac Christians forced from Turkey.

The net effect of these proposed agreements will not be to halt looting but to deny access of displaced peoples to their heritage. 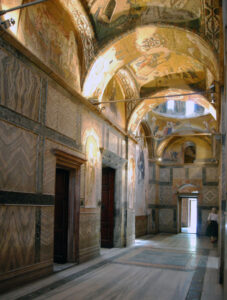 In a September 2020 interview Elias Gerasoulis of AHI noted that Erdoğan “has talked about seizing Jerusalem and liberating the al-Aqsa mosque. Erdoğan has been condemned by the U.S. State Department for the partnership that he has with Hamas. His own AKP has talked about the coronavirus being a Jewish conspiracy. I think it is sheer lunacy to give someone who believes anti-Semitic conspiracy theories… to acknowledge his full ownership of Jewish cultural property and heritage.”

An agreement with Turkey will help President Erdoğan’s campaign of religious extremism. President Erdoğan has incited religious animosities to win political points and made mosques out of museums that were formerly churches, including both the Hagia Sofia Museum and the Kariye Museum, formerly the 14th century Byzantine Church of the Savior in Chora. Together, the Hagia Sophia and the Chora Church exemplify the highest achievements of Byzantine art and architecture, marking the early cultural height and the most developed final expression of Byzantine art. Though not as well-known as Hagia Sophia, the Chora Church, while small, is a work of art in itself. It has been described as filled ‘wall-to-wall-to dome’ with the most beautiful murals and mosaics of the period – an artistic gem that influenced the rise of Mannerist painting and the High Renaissance in Italy.

In August 2020, ten organizations signed a Joint Letter to the U.S. State Department’s Bureau of Educational Affairs and the Cultural Property Advisory Committee (CPAC) at the Department of State, urging them to address longstanding problems of fairness and serious process issues at CPAC.  The letter was authored by Arthur Houghton, President of Global Heritage Alliance (and a former CPAC member).

The letter was signed by policy-watchers including the American Hellenic Institute, the Committee for Cultural Policy, Jews Indigenous to the Middle East and North Africa (JIMENA), and key art collecting and trade organizations. 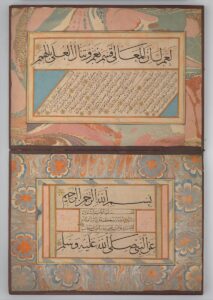 The letter states that CPAC has long ignored concerns among representatives of religious minority organizations. It has approved Memorandums of Understanding (MoU) with Middle Eastern countries that claim exclusive rights over all cultural heritage, including the religious and community property of oppressed minorities. The letter also criticizes the lack of transparency in State Department actions and the failure of requesting counties to provide factual documentation showing the need for U.S. import restrictions.

Now, with the signing of an MOU with the repressive, dangerously xenophobic Erdogan government, which openly claims as state property the heritage of dispossessed minorities, it is more than ever time to address the flaws in the system of cultural heritage administered at the Department of State.