Elias Gerasoulis: A geo-political perspective on the Turkish MoU

It’s not just archaeology: human and religious rights consequences of a heritage agreement 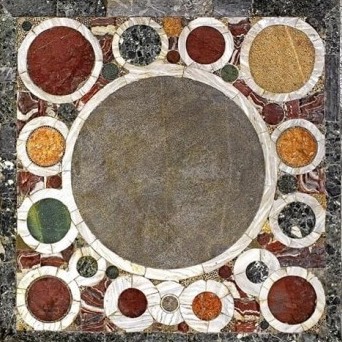 The Omphalion, located in the south-east quarter of the main square beneath the dome of Hagia Sophia.

Cultural Property News presents a variety of perspectives this month – from art historical to political – on Turkey’s recent conversions of important Christian cultural monuments to mosques. Elias Gerasoulis is the legislative director of the American Hellenic Institute, a Greek American organization created in 1974. He spoke on September 24, 2020 at an American Bar Association program sponsored by its Art & Cultural Heritage Law Committee with host Peter K. Tompa, and later answered questions for Cultural Property News about a pending Memorandum of Understanding (MoU) between Turkey and the United States on cultural heritage.

Questions were raised about the propriety of entering into such an agreement when on July 10, 2020, Turkey’s high court annulled a 1934 decree making Istanbul’s Byzantine period Hagia Sophia into a museum. The court’s decision reversed longstanding secular policies established by Mustafa Kemal Atatürk, the founder of modern Turkey, thus paving the way for its reconversion into a mosque. A high court decision in 2019 also set in motion the conversion of the famous Chora Church from a museum into a mosque. Mr. Gerasoulis discusses the wide-ranging political consequences of Turkish President Recep Tayyip Erdoğan’s appropriation of cultural heritage and repression of Istanbul’s shrinking religious minorities for Orthodox Christians around the globe.

Q: The move by Erdoğan’s government to convert – or reconvert – the Hagia Sophia into a mosque has raised real concerns within the Greek community. Can you speak to that?

EG: Absolutely. To give some background, the Hagia Sophia, which was built during the era of the Emperor Justinian, between 532 to 537 A.D., was one of the greatest monuments in all of Christendom, not just Orthodox Christendom [in 1054 there was East-West schism between the Catholic Church and Eastern Orthodox Church, and in subsequent centuries a proliferation of different Christian denominations after the rise of Martin Luther and the Protestant denominations]. The Hagia Sophia was the grandest monument in all of Christianity when it was built. In the late 10th century a Russian delegation came to Constantinople, as Istanbul was referred to at the time. The delegation was so astounded by its beauty and magnificence that the Russian ruler at the time, Vladimir the Great, chose to adopt Orthodoxy as the official religion of Russia.

In 1453, after the fall of Constantinople, the Hagia Sophia was converted into a mosque, but in 1934-1935 under the leadership of Atatürk, the secular founder of the Turkish Republic, it was converted from a mosque into a museum, where there would be access for people of all faiths. Later, it was designated as a UNESCO World Heritage site. 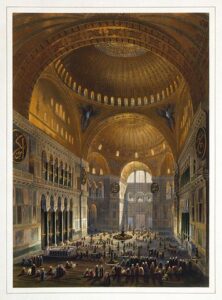 Hagia Sophia during its time as a mosque. Illustration by Gaspare Fossati and Louis Haghe from 1852.

To convert the Hagia Sophia into a mosque today, would be, to put in a broad context, akin to converting St. Peter’s Basilica into a mosque. This is one of the most important monuments in  Christianity. Erdoğan’s government has also converted the Chora Church, also a UNESCO-designated museum, into a mosque, and he has engaged in demolition projects of churches across Turkey.

The conversion is also consequential because it represents President Erdoğan’s success in replacing or getting rid of the last remnants of Atatürk’s secular legacy. Turkey, under President Erdogan, is now an openly anti-Western, Islamist state.

Q: In August, Imam Ali Erbaş, Turkey’s head of the Religious Affairs Directorate (Diyanet) gave the first sermon in Hagia Sophia holding a sword. He said that preaching with a sword sends a message about the conversion of Hagia Sophia into a mosque on the one hand and of conquest on the other. [Ed. note: the Diyanet, once a small state ministry, now operates educational and cultural activities in 145 countries. It is Turkey’s wealthiest ministry, owning over 2000 properties and operating its own construction industry, with an official annual budget over $900 million, that outside analysts say is closer to $1.87 billion.]

A: Having a religious leader go up into the Hagia Sophia wielding a sword is tied to how Erdoğan wants to “liberate” Al-Aqsa, in Jerusalem. Erdoğan’s party has made comparisons between Erdoğan and Saladin and to other previous Muslim conquerors of the past who conquered Jerusalem. Erdoğan is showing his imperialist tendencies, his Islamist agenda, and that freedom of religion in Turkey is not possible under his tenure. President Erdoğan’s agenda is not only an affront to the concept of freedom of religion and human rights, but also shows what a dangerous leader he is.

The implications of Erdoğan’s rogue agenda are not limited to Turkey. He has made his militaristic ambitions towards the whole region very clear. His actions should not only be of concern to Orthodox Christians or Greek-Americans, but to everyone in the international community.

Q: Going back to the State Department and geo-politics, could you explain why the American Hellenic Institute is concerned about a potential cultural property MoU with Turkey that is pitched as a measure to save cultural heritage from looting?

EG: When I first testified to the Cultural Property Advisory Committee, I used the term ‘Trojan Horse’, that this proposal was a Trojan Horse approach by the Turkish government, in order to further a pernicious agenda.

That is a very naïve way of viewing the situation. What is really going on is that the minority population within Turkey has been absolutely decimated because of systematic persecution. If you look at Greece, it is a country of democratic values and pluralism. That is not so in Erdoğan’s Turkey. 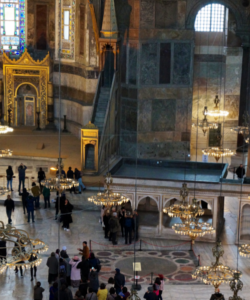 Hagia Sophia, in use as a public museum and monument, with the floor mosaic Omphalion or navel of the world in center floor and mihrab and minbar in background, 24 June 2020, photo by Kharmacher

You cannot look at cultural property issues simply through the very narrow lens of archaeology. You have to consider, number one, the political context in that country, and number two, the geopolitical context. If you don’t take those two elements into consideration you will have a myopic view of Turkey’s proposed MoU. The current Turkish government has made its intentions clear. It wants to root out and destroy the minorities within its country. Erdoğan has said in his own words that he believes himself to be a modern-day Sultan, a modern-day Saladin. That’s how his own party, the Justice and Development Party (AKP), has described him.

For the U.S. to sign an MoU that recognizes Erdoğan’s government’s full authority over Turkey’s cultural heritage over “concerns about looting” when a cultural MoU with the United States is not needed to address that issue, and when his very plainly stated agenda is to either convert or to demolish churches would be an absolute catastrophe, and I don’t use that word lightly. It would be a catastrophe not only for the Orthodox community in Turkey but also for other minority groups.

For example, the Jewish minority is being persecuted within Turkey. President Erdoğan is a vicious anti-Semite. This week President Erdoğan attacked Israel’s “dirty hand” in his United Nations speech, a blatantly anti-Semitic statement. This is just one of a plethora of anti-Semitic comments that President Erdoğan has made over the years. Erdoğan has talked about seizing Jerusalem and liberating the al-Aqsa mosque. Erdoğan has been condemned by the U.S. State Department for the partnership that he has with Hamas. His own AKP has talked about the coronavirus being a Jewish conspiracy. I think it is sheer lunacy to give someone who believes anti-Semitic conspiracy theories, who is supporting terrorist groups that organize against Israel, who views himself in the words of his own party as a modern-day Saladin, the twelfth-century conqueror of Jerusalem, to acknowledge his full ownership of Jewish cultural property and heritage, in addition to the cultural property and heritage of other minority groups in Turkey. It should be self-evident why that’s problematic.

There’s a second point, though, which is very important to understand, and that is the geopolitical effect of signing an MoU with Erdoğan as it pertains to the Ecumenical Patriarch of Constantinople.

Q: Can you clarify why the role of the Ecumenical Patriarch is so important, and that he be from Turkey?

But who can serve as Ecumenical Patriarch is also limited under Turkish law; the Patriarch of Constantinople has to be a citizen of Turkey. Furthermore, the Turkish government does not respect the Ecumenical Patriarch’s international personality and only recognizes him as a local bishop. And there are very few Orthodox Christians remaining within Turkey as a result of the severe persecution and seizures of religious properties during the past 100 years.

The Ecumenical Patriarch’s role is still very important today, but if he is forced to leave Turkey as thousands of others have left because of persecution by the Turkish government, there is a risk that the Russian Orthodox Church, which has open ambitions to ascend to the leadership of global Orthodoxy, will make a power-play and try to delegitimize the Ecumenical Patriarch’s status as primus inter pares (first among equals). The Russian government and Russian Orthodox Church are very clear in their intentions. For example, after the conversion of the Hagia Sophia to a mosque, President Putin announced that he would build a Hagia Sophia ‘replica’ in Syria, as a ‘protest.’ The real reason of such a move is to further display the ambitions of the Russian Orthodox Church, and undermine the authority of the Ecumenical Patriarch. 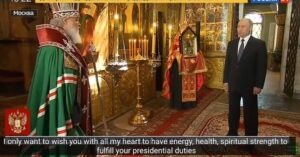 Screenshot of the blessing bestowed upon President Putin of Russia by Russian Patriarch Kirill.

Q: What is the American Hellenic Institute doing in response to the MoU and the Hagia Sophia conversion?

EG: What the archaeological groups, who are lobbying the State Department and pushing for the proposed MoU with Turkey, need to understand is that their actions could cause catastrophic geopolitical implications and promote the influence of Russia, an adversary of the United States.

Also, I have raised this issue with the Congress. Congressman Chris Smith, an influential member of Congress, said – and this is a quote from him – “I understand, through the American Hellenic Institute, that the Turkish government is pushing a MoU with our State Department, ostensibly to impose import restrictions on cultural property. As you know, I’ve chaired hearings on those issues in the past. This MoU deserves serious scrutiny, in light of Erdoğan’s actions, and I do look forward to working with AHI on this as well.” We hope with our friends in Congress to further raise this issue directly to Secretary of State Pompeo.