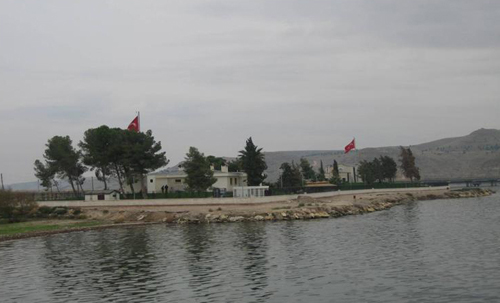 The tomb of Suleyman Shah, located inside Syria just 37 km. from the Turkish border, has been moved by a large contingent of Turkish soldiers that crossed into Syria ostensibly to rescue Turkish soldiers on guard at the tomb from an attack by ISIS. Turkish President Recep Tayyip Erdogan ordered the tomb moved “in order to not endanger the security of the lives of our soldiers on duty.” He insisted that moving the tomb to a site just 200 meters from the Turkish border was “no retreat.” Defense Minister Ismet Yilmaz said the tomb was now better situated, being within walking distance of the border. Turkish officials blew up the white marble building surrounding the tomb so that ISIS forces could not use of desecrate it. Turkish government officials have described the move as a temporary expedient to protect Turkish lives.

The possibility of an attack on the tomb has been treated as a proxy for an attack on Turkey by ISIS since at least last March, when ISIS demanded the withdrawal of Turkish troops guarding the tomb. President Erdogan said on March 26, 2014 that in the event of any wrongdoing against the tomb, Turkey “will of course do whatever needs to be done.” A meeting of Turkish military, intelligence and ministry official at the end of March 2014 reportedly discussed using the threat to the tomb as an excuse for Turkish military intervention in Syria. In October 2014, the Turkish parliament voted in favor of military intervention in Syria.

On February 22, 2015, approximately 100 Turkish tanks and armored vehicles, backed by drones and reconnaissance planes, crossed into Syria. They removed the interred remains of Suleyman Shah, evacuated several dozen Turkish soldiers that were guarding the tomb, and transported the remains to a new location just inside Syria on the Turkish border.

“At 9 o’clock two simultaneous operations started. First, our troops entered Syria… and started the operation to reach Suleyman Shah’s tomb, Turkish Prime Minister Ahmet Davutoglu said. “At the same time, another tank and troop unit entered Syria … and controlled a nearby territory for the new holy place of the tomb of Suleyman Shah, and raised our flag at 9.02 in this territory in Syria.” 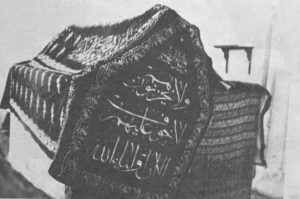 Ownership of Suleyman Shah’s tomb was settled by the 1921 Treaty of Ankara, in which France and Turkey determined that the tomb “shall remain, with its appurtenances, the property of Turkey, who may appoint guardians for it and may hoist the Turkish flag there”. The 1923 Treaty of Lausanne confirmed Turkey’s rights to the tomb, despite significantly reducing the boundaries of the former Ottoman Empire to the modern borders of Turkey. Neither treaty states that the land on which the tomb sits is Turkish territory. The tomb was moved in 1973 when the Tabqa Dam was built, creating Lake Assad. The Government of Turkey has claimed that the treaties of Ankara and Lasuanne gave Turkey territorial rights to the land where the tomb is located, although that is not stated in the treaties. Since the 1973 move, Turkey has claimed the site to be sovereign territory of Turkey, even requiring visitors to the tomb to produce passports. The Protocol between the Republic of Turkey and the Syrian Arab Republic regarding the Tomb of Suleyman Shah, 2003 gave Turkey transit rights to the Tomb through Syrian territory in order to maintain it.

Update: In April 2018, Turkish officials announced that an agreement had been made to relocate the tomb back to its last resting place in Syria.  It is not known if this has been done.