Texan Puts Up a Fight for Tyrannosaur Head 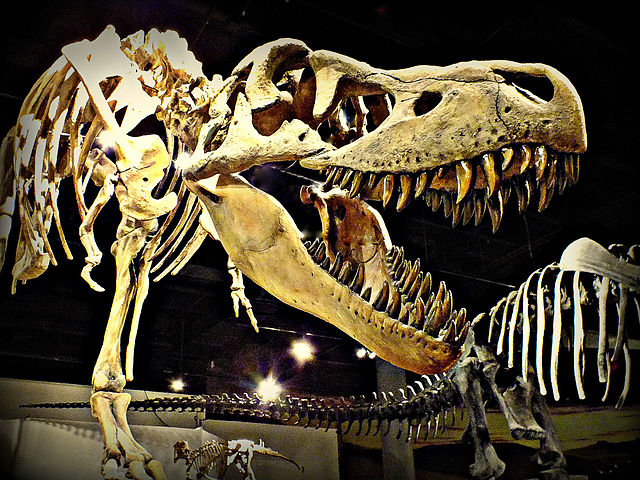 A Texas doctor says that the federal government had no right to seize a dinosaur fossil he purchased on the open market in the US. James Godwin’s Houston attorney, Michael Villa, Jr. told the Dallas News that the doctor will contest a forfeiture claim brought by the US government against what federal authorities say is a smuggled dinosaur fossil from Mongolia. The official seizure claim filed by the government was made four years after the fossil, a skull of Tyrannosaurus Bataar, was taken by federal agents from the doctor’s Wichita Falls home.

Dr. Godwin’s attorney said that he had bought the 65-million-year-old fossil legally in the US from his business partner Rick Rolater, who owns the By Nature Gallery stores in Wyoming and Colorado. Some months after the sale, Rolater was identified as a seller of fossils during the follow up to a federal case against Erik Prokopi, who was accused of having smuggled fossils of the same kind of dinosaur into the US. Rolater himself later plead guilty to smuggling charges involving a Chinese supplier. 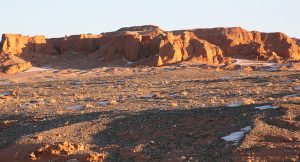 Flaming Cliffs, where many dinosaur fossils have been found since the 1920s.
Source: Flickr Mongolia 2010 055 Author: Einar Fredriksen

The Prokopi case, which began in 2012, was the first in which Mongolia laid claim to fossils now in the US. Prokopi, a passionate fossil enthusiast who spent years painstakingly assembling a complete Tyrannosaurus Bataar skeleton from multiple dinosaur sources, offered the completed Bataar skeleton in a Heritage Auction house sale. The Mongolian government filed a claim, and although the Bataar sold for over $1 million, it was later seized from the auction house by US authorities. When Prokopi fought to keep title to the skeleton, federal authorities brought criminal charges against him. Faced with a lengthy prison term as well as financial ruin, loss of his home, business, and fossils, Prokopi agreed to plead guilty, accept a shorter prison term and provide information to federal investigators.

In the Prokopi case, the government based its claim in part on the fact that the only complete Bataar skeleton known had been found in Mongolia, but acknowledged that bones of Bataars have been located in China. The complete skeleton built by Prokopi was said to have been put together from multiple sources of Bataar bones – 37% from one dinosaur and the rest from at least one other specimen.

Prokopi imported fossils through US Customs as part of his business, whereas Godwin’s purchase was entirely in the US, and took place prior to the Prokopi seizure, apparently without notice that ownership of Tyrannosaurus Bataar fossils would be challenged. Godwin’s attorney, Michael Villa, said that the government would have to establish that the fossil was actually from Mongolia, and that it had been unlawfully removed. According to Villa, ““Just because you claim it’s contraband is not enough.”

In the case against Dr. Godwin’s fossil skull, Mongolia’s attorney, Robert Painter, said that he was surprised at Dr. Godwin’s determination to fight for the dinosaur, calling it a “very… uphill battle.”

One of Prokopi’s former attorneys, George Lederman, told the The Dallas Morning News that other circumstances accounted for collectors’ willingness to give up when faced with a civil seizure: “My own view is that if you dare to challenge the government on a forfeiture action, you may very well find yourself charged with a crime.” Innocent owners therefore prefer to let the seized items go.

Fossils from China, Mongolia, and other foreign nations have been openly sold in the US for decades. During the Prokopi case, a government prosecutor, apparently contradicting himself, said both that there was a large “black market in purloined dinosaur fossils” and that fossil sellers were “operating in plain sight.”