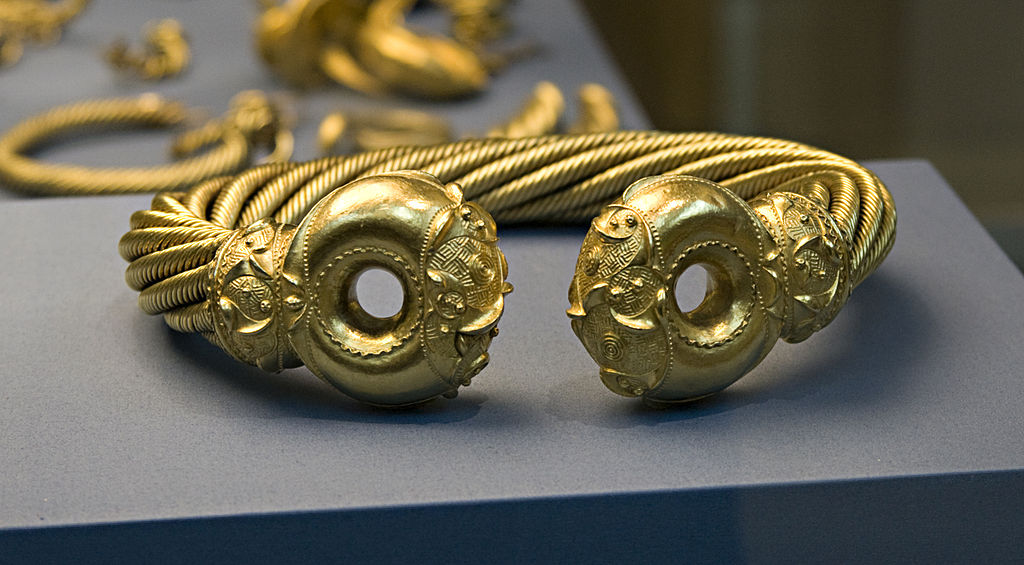 The Great Torc, Snettisham, buried around 100 BC. The torc is one of the most elaborate golden objects from the ancient world. It is made from gold mixed with silver and weighs over 1 kg. Torcs are made from complex threads of metal, grouped into ropes and twisted around each other. The ends of the torc were cast in moulds and welded onto the metal ropes. Gift of The Art Fund. Author Ealdgyth, 4 June 2010, Collection British Museum, Wikimedia Commons, Creative Commons Attribution-Share Alike 3.0 Unported license.

The annual reports of the Portable Antiquities Scheme and the Treasure for 2015 were released at the British Museum in London in late November. The Treasure annual report noted 1,008 Treasure cases and some immensely important new Treasure finds including a large Middle Bronze Age gold torc from Cambridgeshire, a Roman grave assemblage from Hertfordshire, an Anglo-Saxon aestel from Suffolk, and the Watlington Hoard of early medieval coins and Viking Age objects.

Uncovered by a metal detectorist in a ploughed field in Cambridgeshire, the golden torc is considered the most significant find of its kind in a century. It is the largest gold torc ever found: 730 grams of almost pure gold were used to create the torc over 3,000 years ago.  The value of the torc is still being assessed but, as means of comparison, a shorter and lighter torc found in Corrard was valued up to £150,000 three years ago. It is thought that the Ely Museum, a local history museum focused on Isle of Ely and the Fens, will acquire this piece after its valuation.

The Portable Antiquities Scheme (PAS), managed by the British Museum in conjunction with 119 national and local partners within England and Wales, is a highly successful government program for recording archaeological finds. It is the world’s first countrywide proactive mechanism for recording finds from any source, including accidental discoveries, finds by metal detectorists and amateur archeologists. Every find is digitally recorded and made publicly available on the PAS online database creating a valuable educational and research resource.

Since its inception in 1997, over 1.2 million finds have been recorded in the PAS database with 82,272 recorded in the last year. Some of the archeological highlights from this year include the finding of a Roman villa complex in Wilshire and a site associated with the English Civil War on the Shropshire/Worcestershire border.

The Roman villa complex was discovered when electricians digging a trench for underground electrical cable almost destroyed Roman mosaic flooring tile that they’d unearthed. Fortunately, the significance of the tile was recognized in time and the digging was halted. A well-preserved villa of this caliber, undamaged by agriculture for over 1,500 years, is considered to be an extremely valuable site with the potential to increase understanding of Roman and post-Roman Britain.

The Treasure Act 1996 is the legal basis for PAS. It established the legal obligation of finders of potential Treasure to report their finds to the local coroner. Finders are rewarded at full market value if their finds are acquired by a local or national museum. Many finders waive their right to a reward.

The PAS annual report also noted “through the PAS, archaeological finds discovered by the public are transforming our understanding of Britain’s past. These finds not only shed light on past peoples, but also how they worked and lived in the historic landscape.” To date, the PAS database has been used in 528 research projects, including 25 pieces of large-scale research and 110 PhDs further increasing knowledge of Britain’s past.

The PAS also developed five strategic goals for this annual report. To: