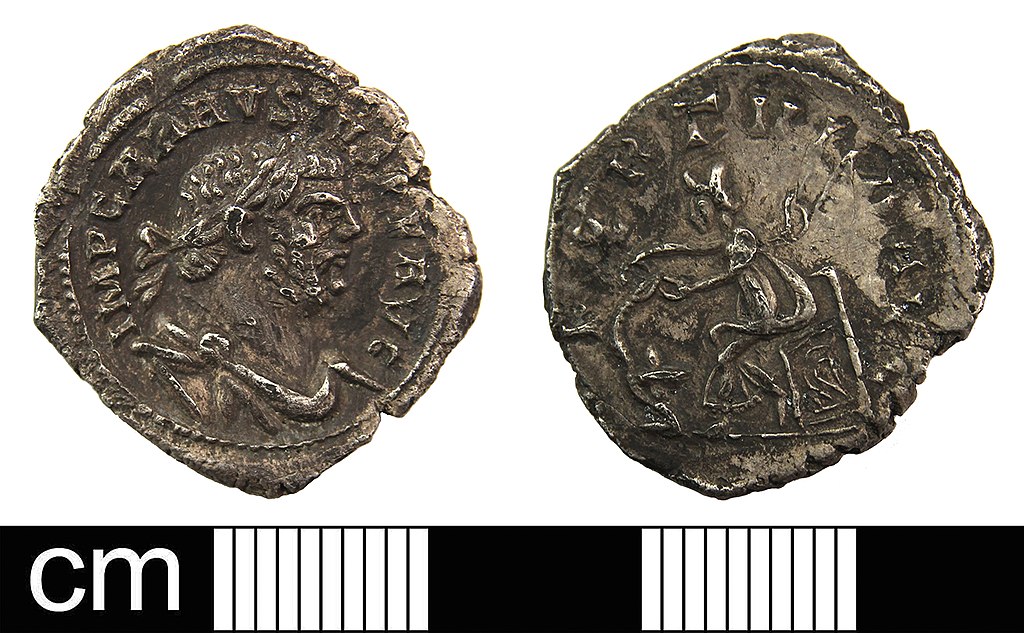 Guest author Peter K. Tompa is the author of the Cultural Property Observer blog and a foremost legal specialist on cultural property in the U.S. He discusses how a Swiss company has taken new steps in coin research using facial recognition techniques to quickly link coins in current collections and the market to coins published in prior auction catalog records. He reports on a presentation to U.S. collector organizations by Dr. Jonas Flueck, an archaeologist who founded a Swiss coin auction company, on the coin database he built and how it is used to re-discover provenance records.

On May 30, 2020, Dr. Jonas Flueck of Ex-Numis and Lugdunam International Auction House explained his use of facial recognition technology to rediscover old provenances for ancient coins.  United States import restrictions imposed on ancient coins, new regulations in Germany and the EU, and claims that terrorists have been selling ancient coins to fund their activities have all made the rediscovery of old provenances more important than before. 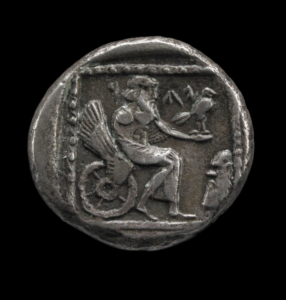 Silver coin minted in Judea, Palestine. 4th C BCE. (reverse) Male deity bearded and seated right on winged wheel; right hand is wrapped in garment and left hand holding a hawk; in right field, bald, bearded mask. Originally published in the first catalog of the British Museum of coin and medal collections by Taylor Combe, the then Keeper of Antiquities, in 1814. Copyright Trustees of the British Museum. TC,p242.5.Pop

Until now, dealers and collectors have had to conduct manual searches through hundreds of old auction catalogues to recapture old provenances.  Without some suspicion where a coin may have appeared in the past, this is virtually an impossible undertaking.   The genius of Dr. Flueck’s system is that he has spent considerable time, effort and money scanning thousands of auction catalogues and then applying facial recognition technology to compare coins which are submitted to his service to those in old catalogues in order to recover old provenances.   These include some 130,000 coins listed in catalogues pre-dating 1970, the date of the UNESCO Convention.

Still, the system has some serious limitations that help explain why the vast majority of coins without a recoverable provenance are not the products of recent, illicit digs.  First, before widespread use of digital photography in the 1990’s, it was time consuming and difficult to take photographs of coins.  For that reason, the vast majority of coins sold at auction or in fixed price lists were not photographed.  Second, although Ex-Numis has recently sought to add fix price lists to its database, many of these lists were only produced in small numbers and are no longer easily available today.  Lastly, the system does not capture more recent provenances created during the digital era; however, such coins can be found reviewing commercially available databases, like Coin Archives, AC Search, Sixbid Archives or CNG’s Research page.

Notwithstanding these limitations, when a match is found, it can not only detail lost provenances but whether a coin has been altered over time by cleaning or tooling.  It can also provide some assurance that a coin was on the market before the advent of highly sophisticated fakes produced with the use of laser cut coin dies.  Conversely, it can prompt concerns about authenticity if a coin was previously withdrawn from auction.

Recovering a provenance can also establish a particular coin was formally in a prestigious collection, like that of Prof. Pozzi and Sir Arthur Evans, a famous archaeologist.   Moreover, it can show coins traveling internationally between the United States and Europe.  Finally, it can show how prices change over time for specific coins. 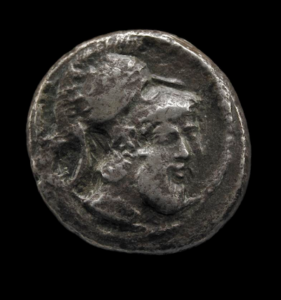 Archaeologists and others not familiar with ancient coin collecting often ask why so many ancient coins lack a provenance.  First, most coins in the past auctions were a very small part of the market.  Most coins were instead purchased at coin fairs and in coin stores with an invoice, but one which did not picture the coin.  Second, because provenances were not that important, they were often not included in auction catalogues, except for coins from famous collections.  Third, before the advent of modern facial recognition technology, it was very time consuming to search for old auction provenances by reviewing old catalogues.

Dr. Flueck became interested in old auction catalogues when he began work at a Swiss auction house.  Over time, he has collected a large number of auction catalogues, which he married to facial imaging technology.  This technology works best for coins with irregular flans, which is common in the Greek series.  It works less well with coins with regular flans made in quantity, which includes most Roman Republican and Imperial coins.  It is also difficult to match coin images in old catalogues produced with the use of plaster casts.

The process for developing his system was very time consuming.  First, he collected a large number of catalogues based on lists of historic catalogues.    He then cut out individual pages and created PDF pages and then pages individual coins.   He ended up scanning approximately 5,000 catalogues to create his database.  These catalogues date from the late 19th c. to about 2005, when most catalogues went digital. The auctions are from around the world of ancient, chiefly Greek and Roman coins.

Since 2006, he has rediscovered more than 5,000 lost provenances, which he hopes do not get lost again.  It is easier for the system to locate coins with irregular flans.  It is more difficult to locate coin images with regular flans, which includes all early coin images made by use of plaster casts.

Dr. Flueck then answered several questions.  He was first asked if his system could be used for Greek vases.  He believes a similar system could be applied to Greek vases if funding is found. He was asked if it is harder to find provenances for Roman coins because more Greek coins in the past appeared at auction.  Dr. Flueck does not have statistics for that because he searches for Greek coin provenances far more frequently.  He does note however that it is more difficult to find matches or Roman coins because of their more regular flans.

Dr. Flueck has not been asked to provide expert legal testimony, but he has provided provenance information used for export and import paperwork.

Asked how fast the database is growing, Dr. Flueck indicated that he is at a point where it is difficult to acquire new catalogues.  He hopes to add reference works providing provenance, major collections that were dispersed privately and fixed price lists.  Of course, this is also very time consuming.  It is noted there is a dearth of published provenances from the late 1930’s to 1950’s due to WWII and its immediate aftermath. The oldest provenance Dr. Flueck has traced is from the late 19th century.  The most valuable is for a Dekadrachm of Syracuse.

Fixed price lists are important sources of provenance information from the 1950’s-1990’s.  Dr. Flueck has a complete set of Münzen & Medaillen  and Credit Suisse price lists.  Bank Leu and Hess also produced some rare lists from this period.  Dr. Flueck is missing American price lists from the 1960’s-1970’s from his database. There is also a discussion of the American Numismatic Society card file and how hopefully, this can be digitized in the future. The Schaefer archive will also be a source of provenance information for Roman Republican coins.

The database depends on what was considered an “ancient coin” in the auction catalogues.  As a result, there is uneven coverage of Byzantine or barbaric coins.  Byzantine coins are typically difficult to match because the flan shapes are so similar. There was a discussion of the 130,000 coins in the database with pre-1970 provenance. Dr. Flueck notes that this relatively low number is attributable to the fact that so few coins were photographed during this time period and so many were sold outside of auctions.  Even for auctions, most coins were merely listed, not pictured.  Typically only about a quarter of coins may be pictured.