Home > Analysis > No EU problem with terrorist antiquities, so let’s legislate for it

No EU problem with terrorist antiquities, so let’s legislate for it

Despite the European Commission’s own report acknowledging that no evidence exists to show terrorist-related smuggling of cultural property within the European Union, it is pressing ahead with stringent new rules to tackle the issue 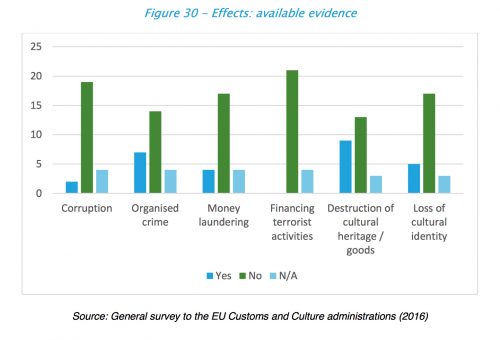 COMMENT: Following on from my last blog, the European Commission’s 199-page Deloitte report into tackling cultural property trafficking now confirms that there is no evidence at all that terrorism-related material is entering the EU.

It is even helpful enough to publish a bar chart showing this, which I reproduce above.

So where does that leave us?

To recap, the EC set about investigating this issue at the beginning of 2016, because it identified trade in cultural goods as a primary source of revenue for terrorists. It concluded that a common policy approach was the way to deal with this threat, but the first thing it wanted to do was to identify how big a threat this was within the EU.

More than a year later, and after extensive research, consultation and analysis, it has concluded that the evidence is “lacking”, or rather is non-existent.

So, does it also conclude that all the existing adopted measures – the Hague Convention, UNESCO Convention, emergency regulations covering Syria and Iraq and multiplicity of other legislation – are working in preventing crime in this way?

Apparently not; instead, it seems to conclude that the absolute lack of evidence points to the system not working, and so, of course, stringent new measures are needed. However, when you add in all the other initiatives undertaken to trace looted and trafficked material within the European Union – Operation Pandora among them – and the fact that nothing has ever been found, you have to start asking if the authorities will ever accept that maybe the problem lies elsewhere.

It is a little like the medieval trial by water for witches: if they sank and drowned, it showed that they were innocent, but if they escaped and floated to the surface they were guilty, and so burned at the stake. Either way, they were doomed. It’s the same for the art market: lack of evidence of wrongdoing is never taken as a sign of innocence and compliance, just as proof that scrutiny is not good enough and the rules need tightening.

It’s another case of flipping a coin on the basis of ‘Heads, I win; Tails, you lose’.

To show that this is, indeed, the thinking, take the following statement on page 127 of the Deloitte report: “Considering the qualitative and limited reliable quantitative data available, the relatively low level of seizures could indicate the weaknesses of the current import controls system, particularly with regard to the effectiveness of the measures in place.”

In other words, if they had found significant of evidence, it would have justified new measures, and the fact that they haven’t found anything means that the system must be at fault and so needs updating.

The options under consideration

Various proposals are under consideration in the report: declarations by importers/exporters of cultural objects accompanied by Object ID passports, import licences and exports certificates. All of this would be tied into some overarching international database, require a huge budget, enforced cross-border co-operation and access to often technologically incompatible national databases (good luck with that). That’s before you get each member state to upgrade the training and expertise of customs officials.

Is it really credible to make such an enormous commitment of resources, time and money to tackle a problem that your own detailed research shows doesn’t really exist?

Nonetheless the report continues to insist that the scale of the problem is huge, relying on dodgy stats, such as the utterly unsubstantiated April 2016 claim by the Russian ambassador to the UN that ISIS was making up to $200 million a year from looted antiquities – a claim completely at odds with reports from the World Customs Organisation, Europol, Interpol and other specialists in studying this area of crime.

Slightly more reassuring is what the report states on page 134: “Addressing the illicit trafficking in cultural goods cannot take place without engaging stakeholders in the art market and society at large, taking away ignorance or un-willingness to operate on the basis of agreed Codes of Ethics (UNESCO International Code of Ethics for Art Dealers).”

Well that’s great, but to engage with people, you need to relate to them properly, not ask them for evidence and then ignore it. What is being talked about here is not engagement but the handing down of orders in a dictatorial manner. There is ignorance, and even wilful ignorance here; however, it is not on the part of the trade, but those who refuse to accept the evidence that they have spent years collecting at great cost because it does not suit their agenda.

Where the report gets most interesting is in its analysis of the effectiveness of the options it proposes.

Certification also requires a pre-existing administrative cooperation agreement between the EU and the third country, which may not be in place.

On page 158, the report does at least acknowledge that its proposals might make life difficult for legitimate business interests: “Finding the balance between the interests of traders and the interests of the authorities to combat trafficking in cultural goods is difficult, particularly with regard to this topic. Imposing a too heavy burden on traders could result in the impediment of licit trade, potentially even enhancing the trafficking in cultural goods.”

But then it spoils it by adding: “Nonetheless, considering the current state of play, the authorities are not adequately covered by a legal framework safeguarding the respect for currently existing rules and to effectively act against the trafficking in cultural goods.”

An odd way to address the current state of play

The “current state of play”. The report has just admitted that the current state of play is that there is no evidence of a problem. If that is the case, then the balance is pretty easy to find: stick with existing measures because they seem to be working.

Import declarations fare little better in the report’s analysis (although they are what it finally goes on to favour). On page 164, it declares: “The system will rely on the importer’s good faith. Moreover the information about the good that the importer will have at his/her disposal will come from the exporter to a large extent. The identification could still result in false information on the good. The importer would however bear the responsibility for such false statements. This declaration will create a burden on all EU importers who want to import goods that potentially fit in the definition of the cultural goods.”

So perhaps the answer is the fourth option, licensing. Apparently not, as the report argues on page 166: “Time necessary for receiving the license would slow down trade of antiquities and other artefacts… The cost for EU authorities to set up and operate such a system would be quite significant and the delays for imports could turn out to be prohibitive. The cost will be disproportionate for the authorities and for the market. It would also increase the price of the goods.”

It also recognises the drawback that “many third countries do not provide for such certification [which] would effectively mean that all imports of cultural goods from these countries would be blocked”. (page 167)

And where countries do provide for such export certification, but no arrangements for administrative co-operation exist between them and the EU, which would allow verification (cross-checking with the exporting country’s customs) of the certificates by EU customs, “imports would de facto also be blocked”.

Pretty unsatisfactory all round really, as the report itself concludes, but still the European Commission intends to press ahead.

Of course, one of the fundamental aspects of these proposals is the definition of “source countries”. Does the Commission mean exporting countries or countries of origin? The report doesn’t say, but this is something that really matters. If it means countries of origin, how would that work for items that left the country decades or even centuries ago? And what about countries that have no certification process? Would a French collector importing a scarab bought in a New York sale have to ask Egypt for an export licence? What would they need to show?

When you look at the list of information required under the ObjectID process, including photography, it is clear that it would quickly become uneconomic to trade in lower-value items, so a significant section of the legitimate market would be blighted anyway. And taking all of the above into consideration, while creating a considerable challenge for dealers and auction houses, it would be all but insurmountable for most collectors and private buyers and sellers.

All in all, this set of proposals is a bit of a mess, and it is all so unnecessary if you take into account the Commission’s own reasons for looking into this.

What we have here is not the proposal for urgent measures to tackle a real problem, but a bureaucratic tidying up exercise, which misses the point because it will not be replacing other measures but adding another unnecessary layer of red tape to them.

The Commission announced its proposals in July, having taken delivery of the Deloitte report in June. So why did it not publish that report until September? Could it be because it didn’t like what it had to say?

CCP thanks Ivan Macquisten for generously allowing us to reprint this important blog post from his website.