Around the Mediterranean: discoveries, ancient economies and national politics

Euergetist does good, skeletons in amphorae in Corsica and Hvar, Roman bath & condiment factory in Spain, politics invades archaeology at Ani in Turkey, gateway at Aizanoi, and a statue in Afyon’s sewers. 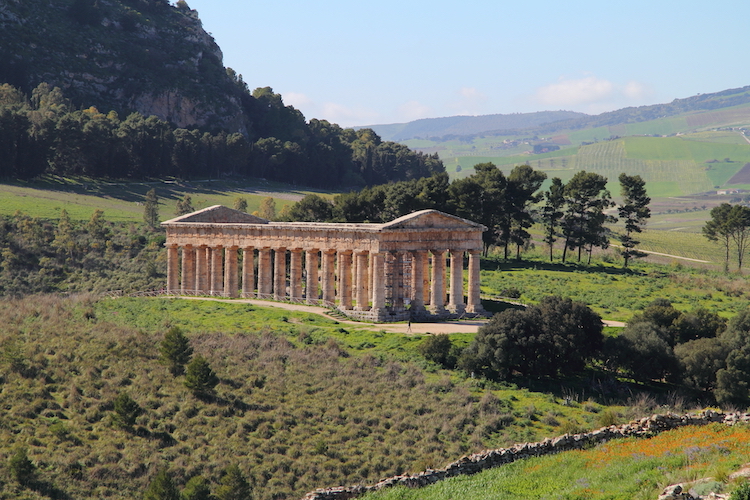 Euergetist Does Good in Segesta, Sicily

At the end of May 2021, archaeologists and researchers from the University of Pisa, IMT School for Advanced Studies Lucca, and the Segesta Archaeological Park announced new discoveries in Segesta, known as a center of Bronze Age Elymian culture and for its unfinished Doric temple and grand stadium theatre.

A press release from Scuola Normale Superiore posted on the University of Pisa website describes significant new finds including “the discovery of a monumental building near the portico that once stood at the end of the ancient agora” of Segesta. The function of the building is not known, except that it had a public, not a private role in the community. The plaza in Segesta was made of a series of terraces, with a great portico carved through the rock closing the agora.

The researchers were pleased to announce that an inscription was found with the name of the euergetist, Diodorus, son of Tittelo, together with a description of the donor’s works for the public benefit, on a plinth near the door of the building. The inscription dates to between the second and first centuries BCE.

Diodorus, was already familiar to archaeologists working in Segesta. His name had also been inscribed on the base of a statue at the theatre and on a statute of his sister, a priestess of Aphrodite Urania (the spiritual or ‘heavenly’ Aphrodite, not the more earthly manifestation). This particular inscription had been found in the 17th century during investigations at the Doric temple at Segesta.

Diodorus made these philanthropic gifts somewhere between the second and first century BCE. It appears that philanthropy was a tradition in Diodoros’ family. His father Tittelo was a gymnasiarch, the head teacher or tutor of a school, and had financed the construction of a building for use of the young people of Segesta.

In making the announcement of the discovery, the excavators emphasized the importance of unearthing a previously unknown part of the city and through the discoveries made there, understanding how the munificence of great families played a major role in Sicilian society.

The excavation was led by Professor Anna Magnetto, a member of the faculty in Greek History and Professor Maria Cecilia Parra of the University of Pisa, each of whom is a specialist in the history of Greece, Magna Graecia, and Sicily.

Skeletons in amphorae in Corsica and Hvar

Two separate excavations of ancient necropoli in the Mediterranean in spring 2021 revealed multiple burials in amphora, sparking curiosity about this ancient custom. (Amphorae are jars, usually of ceramic material, with a pointed end or narrowing to a flat base, with two handles and a relatively narrow neck.) Amphorae were commonly used to store and ship liquid goods such as olive oil and wine throughout the Mediterranean. They were also used and re-used for cremations or covers for a coffin or inhumation. 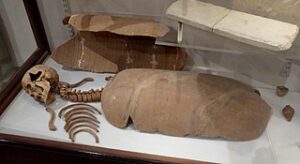 A burial from Comino (formerly Ephaesta) 3rd-5th C CE, A man buried between the split halves of an amphora. Discovered during trenching in 1912, Gozo Museum of Archaeology in Victoria, Gozo, photo by Ethan Doyle White, 27 November 2017, CCA-SA 4.0 International license.

Jar burial was not an uncommon practice during late antiquity and was frequently used to inter infants and young children. In different parts of the Roman world, amphorae and amphorae fragments are found used as funerary building material, as burial goods, sometimes deposited after having held a funerary meal, for funeral libations, as grave markers, and in the case of these Corsican burials, as coffins themselves, the body filling the amphora, almost like a ship in bottle.

What is unusual in the late antiquity amphorae burials on the islands of Corsica and Hvar is that many of the burials within amphorae contain adults. Forty adults were found buried in giant amphorae on the French collectivité territorial of Corsica. A number of adult amphora burials also appear to have been found among twenty graves in an ancient necropolis on the Croatian Island of Hvar, though remains are still being analyzed.

The necropolis on Hvar Island was excavated by Croatian archeological research company Kantharos during the preparation for a new library and reading room in the town of Hvar. The graves were found in the front garden of Radošević Palace, built in the Baroque style in the 17th-century by the Radošević-Radossio family. A total of twenty burials, preliminarily dated from the second half of the 4th century to the beginning of the 5th century CE, were found containing a total of thirty-two individuals and assorted grave goods. One masonry-lined tomb contained the remains of twelve people. Grave styles also included structures made of roof tiles and earthenware in addition to the lined tomb and amphorae burials.

The article Why Were These Ancient Adults Buried in Jars on the Island of Corsica? for the online Smithsonian magazine, states that “researchers are unsure of the unusual funerary practice’s purpose.” Archeologists from the Institut National de Recherches Archéologiques Préventives (Inrap) date the graves in the necropolis on Corsica in the French commune of l’Île-Rousse from between the third and the sixth century CE. Of the forty graves, the majority were amphorae burials. One individual was even interred in an amphora within an amphora.

From the discoveries at the two sites, researchers hope to add more to their knowledge of the ancient practice of amphorae burial which has been documented in other locations in the Greco-Roman world. [i]

A Roman bath complex spanning an estimated two and a half acres was recently discovered, hidden beneath the sand of a Spanish beach in southern Andalusia. Researchers say that its size indicates that the area, near to the present village of Canos de Meca, was a more important ancient settlement than was previously known.

While searching for evidence of the oyster and fish farming and commercial food processing in Roman times, like the ancient salt pools found at nearby Cape Trafalgar, the archaeologists discovered 4 meter high walls making up a multi-room baths complex in an “exceptional state of conservation.” They found windows and a door with its lintels still in place, and evidence of a hypocaust system, a form of central heating that circulates hot air below the floor of a room. 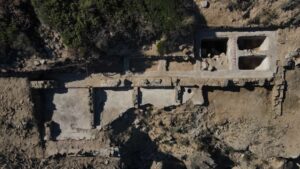 The archaeological team speculated that the baths were for the use of the local inhabitants, a working community, and that the colored frescoes and marble decorations discovered during the excavations also indicate an unexpected degree of wealth in the area.

A settlement at nearby Cape Trafalgar produced the ubiquitous fermented fish sauce, garum, that was Rome’s most valued condiment, as well as processing other products from the sea. Excavations there also located walls with floral decoration. Additionally, the researchers uncovered a far earlier prehistoric tomb with six persons, one wearing a beautiful stone bead necklace. There was also evidence of later usage of the Cape Trafalgar site: some 12th-13th century medieval ceramics were discovered where the University of Cadiz’s Arqueostra project is investigating more ancient food production.

Project to reveal “hidden history” of Ani – is politics invading archaeology in Turkey? 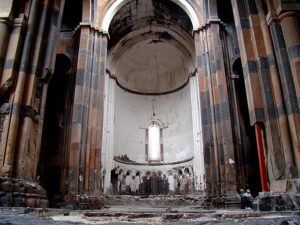 Two people sitting inside the Cathedral of Ani in Ani, Turkey, 100 m from Armenian border. Large parts of the roof have fallen down, allowing daylight into the building. Photo by Bjørn Christian Tørrissen, 9 August 2009, CCA-SA 3.0 Unported license.

An article in the Daily Sabah, a pro-government newspaper, “Excavations to reveal hidden history of eastern Turkey’s Ani ruins,” describes a major push for archaeological work to be done in Ani, on the Armenian border, to reveal its “hidden past.” Given that Ani is most famous for its “1001 churches” and as the chief city of Armenia and center of Armenian culture in the Middle Ages until its steep decline around the 14th century, the descriptions of planned excavations and restorations appear to be slighting its Christian history in favor of its Muslim past. Certainly, Ani was a city of many cultures and conquests, but describing the Armenian period as “between 885 and 1045 CE” requires some serious reorienting, if not rewriting of the area’s history.

A major archaeological program will always be of educational and scientific value. The 12-month excavation will be conducted in 2021 and 2022 by Kafkas University (KAÜ), in partnership with the General Directorate of Cultural Heritage and Museums of the Ministry of Culture and Tourism. The excavations outlined in the article will take place around the Seljuk Bazaar, the large bathhouse, and the Ebu’l Manuçehr mosque, which the article describes as the “first Turkish mosque in Anatolia.” The mosque was begun by Ebu’l Manuçehr Bey just a year after the stunning Seljuk victory in the battle of Manzikert in 1071, when the Byzantine armies were defeated by sultan Alp Arslan, severely weakening the Byzantine Empire. The excavations will be led by Muhammet Arslan, head of KAÜ art history department. Dr. Arslan told the Daily Sabah that, “with our latest excavations, we will also revive the historical background of this ancient land.” 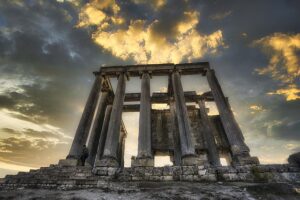 The ancient Anatolian city of Aizanoi has every civic ornament a city could have: a magnificent temple to Zeus, a 13,500 seat stadium and 20,000 seat theatre complex, Roman baths, handsome necropoli, and a world class indoor market, complete with fragments of the Price Edict of Diocletian – rules intended to prevent inflation and cap prices on goods – still written on its walls. These outstanding features earned Aizanoi a place on the UNESCO World Heritage Site Tentative List in 2012.

In June of 2021, archeologists announced that yet another important edifice has been revealed during the excavation of the floor of the agora, the remains of a stone gateway to the agora, located a little more than 300 feet from the Temple of Zeus.

Earlier this year the senior archaeologist for the Aizanoi excavation, Elif Ozer, told Turkish state-run news source, Anadolu Agency, about a significant numismatic find at Aizanoi.  Over 600 coins dated to between 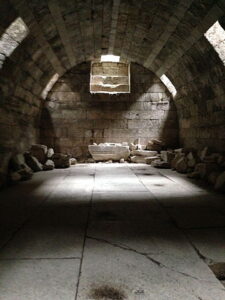 Inside Temple of Zeus at Aizanoi. Photo by Gtuffli, 17 October 2013, CCA-SA 3.0 Unported license.

75 B.C. and 4 B.C. were found in a jar under terra cotta plates most likely meant to hold it in place near the waterway where it was found. Most of the coins are Roman denarii from the reign of Emperor Augustus (63 BCE – 14CE). Cistophori from Pergamon in the Kingdom of Pergamum constitute a smaller portion of the find.

Archeologists have uncovered traces of settlements going back over 5,000 years in and around Aizonoi. The city itself was part of the Kingdom of Pergamon, then the Kingdom of Bithynia, then came under Roman control after 133 B.C.

Archeological efforts have increased at Aizanoi since 2011, though there have been excavations and archeological surveys at the site since the 1830s. There is much more to explore; experts using ground penetrating laser technology say that 80% of the site remains underground.

Statue found in Afyon Turkey during repairs to sewers 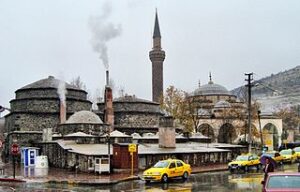 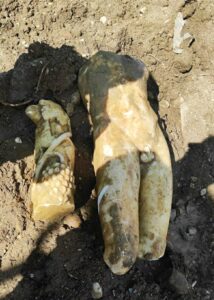 The remains of a statue consisting of the torso and upper legs of an athletic young man were found during the digging for repairing sewers in Afyon city in western Turkey. The municipal excavations were taking place around Sinanpaşa Mound within the borders of Afyonkarahisar Sinanpaşa Municipality. The meter long statue does not appear to have any distinctive attributes – and unfortunately, neither the head nor lower limbs have been found. However, the Provincial Director of Culture and Tourism, Mehmet Tanır, told Turkish news outlets that, “According to initial data, the statue, which is considered to belong to the Roman period, is thought to be Apollo.”