But EU also agrees to €2 billion aid package for oil and gas export. 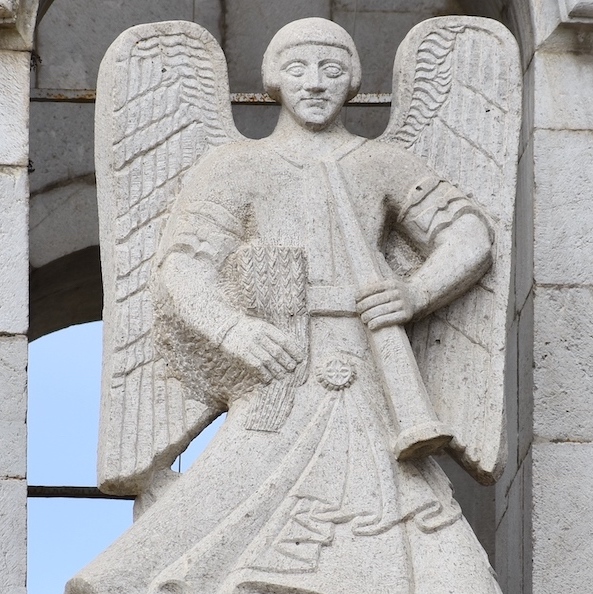 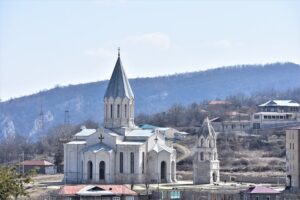 Over the last year, since the seizure by Azerbaijani military of the majority-Armenian disputed territory of Artsakh/Nagorno-Karabakh, President Aliyev of Azerbaijan has led a campaign of disinformation and destruction, purposefully destroying the evidence of more than a thousand years of Armenian history in the region. Azerbaijan’s attempts to erase Armenian monuments, churches, monasteries and settlements in Nagorno-Karabagh has been of very long duration, and a deeply personal as well as political campaign, as President Aliyev’s father was equally determined, during his Soviet period rule over Azerbaijan, to excise Armenian history and culture.

On March 10, 2022, the European Parliament voted overwhelmingly to adopt a Joint Resolution (2022/2582(RSP) on the destruction of cultural heritage in Nagorno-Karabakh. The Resolution condemned Azerbaijan’s destruction of Armenian monuments, churches, and historical sites after the November 9, 2020 ceasefire in the Nagorno-Karabakh war. The EU Resolution called on UNESCO to document the ongoing destruction; UNESCO says that it has been refused permission by the Aliyev government to visit the region to assess the damage, but the UN nonetheless sent representatives to a celebratory event in Shushi, the site of significant destruction, at the same time.

The European Parliament strongly condemned the “destruction or desecration of any monuments or objects of cultural, religious or national heritage,” saying that such actions infringe the principles of the European Union. 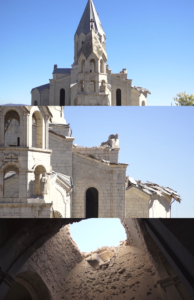 The resolution made clear that Azerbaijan’s actions continued a lengthy pattern of deliberately wiping out Armenian history by the Azerbaijan government. It spoke to the…

“catastrophic impact on the cultural heritage of Nagorno-Karabakh and the region; whereas over the last 30 years, the irreversible destruction of religious and cultural heritage has been carried out by Azerbaijan, notably in Nakhchivan [Nakhichevan]Autonomous Republic, where 89 Armenian churches, 20,000 graves and more than 5,000 headstones have been destroyed; whereas this has also occurred in the former conflict areas returned by Armenia to Azerbaijan, in particular the almost total destruction and looting of Aghdam and Fuzuli.”

The resolution also states that Azerbaijan “deliberately damaged” Armenian cultural heritage during the 2020 war, “particularly during the shelling of the Gazanchi Church, the Holy Saviour/Ghazanchetsots Cathedral in Shusha/Shushi, as well as the destruction, changing of the function of, or damage to other churches and cemeteries during and after the conflict, such as Zoravor Surb Astvatsatsin Church near the town of Mekhakavan and St Yeghishe in Mataghis village in Nagorno-Karabakh.”

The EU Resolution specifically noted that, “during his visit to the 12th century Armenian Church in Tsakuri, [Azerbaijan’s] President Aliyev vowed to remove its Armenian inscriptions.” 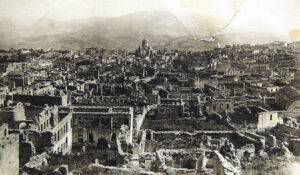 Armenian boroughs of city of Shusha destroyed by Azerbaijani armed forces in 1920 with cathedral of Holy Savior in background. Wikimedia Commons.

Ghazanchesots Armenian Apostolic Cathedral in Shusha, one of the largest Armenian churches in the world, has suffered repeatedly in fighting between Azeris and Armenians. Although it dates only to the second half of the 19th century, it has been destroyed and rebuilt several times. After WWI, a botched attempt by Armenians to take the town led to internecine fighting, retaliatory killings of Azerbaijani police by their Armenian counterparts, a massacre of some 500 Armenian civilians and the burning of the Armenian quarter of Shusha. The Holy Saviour/Ghazanchetsots Cathedral was badly damaged in the ensuing burning of the town.

In the most recent conflict between Armenia and Azerbaijan, two missiles fired by Azeri troops hit the church, the first pierced the roof while civilians were sheltering inside although no one was killed.  A second attack that devastated the interior the same day injured a Russian journalist inside the church. 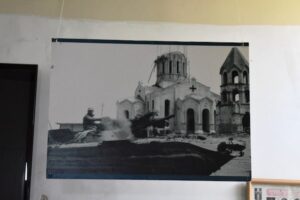 Azerbaijan President Ilham Aliyev denied targeting the church, claiming it was a deliberate provocation by Armenians. However, Azerbaijani journalist Saadat Kadyrova told a Russian TV audience that the bombing of the church was justified and compared the residents to terrorists.

Human Rights Watch and Amnesty International have both pointed to the deliberate targeting of areas with civilian populations with cluster munitions during the war. Human Rights Watch collected remnants of what appeared to be guided munitions at the church after the attack.

The cultural attacks are aimed at reminding the Armenians left in Artsakh/Nagorno-Karabagh of how helpless their community now is. The European Parliament resolution described the desecration and neglect that followed the first Nagorno-Karabakh war, when religious and historic sites were used as cattle sheds, damaged to remove cultural traces, or taken apart for building materials. 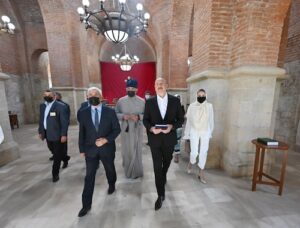 Azerbaijan has not only removed the physical evidence of ancient Armenian culture; at the same time, its government has promoted a false historical narrative attempting to undermine Armenians’ historical presence in the region. The Azerbaijan government claims that Armenians have not lived in the region since medieval times and that the ancient churches and monasteries that dot the mountains and sheltered valleys are remains of an ancient “Caucasian Albanian” Christian community that is now extinct. (These ‘Caucasian Albanians’ are not connected to the Balkan country of Albania or any of its peoples.)

Anar Karimov, Azerbaijan’s Minister of Culture, continues to promote this long-lasting but fictional “Caucasian Albanian” civilization as a justification for defacing ancient Armenian churches. He said:

‘A working group consisting of specialists who know Albanian history and architecture has been set up to remove the so-called traces written by Armenians on Albanian religious temples.’

In fact, according to writer Javid Agha, scholars have multiple theories about a so-called Albanian group of 26 tribes referenced by the Greek historian Strabo in the region that became one of the earliest Christian states in the 4th century. According to Agha, these Albanians “practically disappeared in the 8th century when the last Albanian catholicos, Nerses Bakur, was deposed by the Arab Caliph Abdul Malik I,” and whose “last king Varaz Tiridates II, was assassinated in 822 and the state gradually declined as Arab invaders moved in.” With the exception of a tiny subgroup known today as “Udis” there are no linked peoples remaining in the region. The history of the now extinct Albanian group is primarily preserved in early Armenian records.

Azerbaijan has also claimed that the 9th-14th century, beautifully carved stele-form gravestones called khatchkars are recent fakes made by Armenians to “prove” their ancient history in the region and that they are aged with vinegar and other chemicals to create a medieval appearance. Since the 1990s, Azerbaijan has been on an active campaign to destroy these khatchkars. In the most appalling incident, thousands of the carved medieval gravestones were destroyed at Djulfa by the Azerbaijan army, who bulldozed the massive graveyard, crushed the khatchkars and dumped the stone in the nearby river. The graveyard is now a shooting range.

Gas and oil appear to take precedence over cultural concerns. 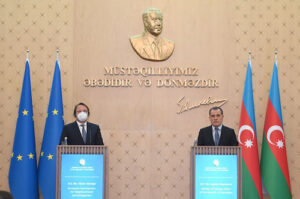 The EU Resolution condemning Azerbaijan’s cultural destruction in Artsakh/Nagorno-Karabakh was adopted 635 votes to two, with 42 abstentions. Although it is a powerful statement denouncing the destruction and clearly identifying the Azerbaijan regime as the culprit, the resolution has only moral force. While it may impact future relations and counter Azerbaijani propaganda and activities to promote Azerbaijani influence in the EU, it has no other clear effect.

In fact, the EU continues to court Azerbaijan in its search for alternative sources of oil and natural gas. In early February, EU Commissioner for Neighborhood and Enlargement Oliver Varheli met with Azerbaijan Finance Minister Jeyhun Bayramov to in Baku to discuss a €2 billion financial package allocated to Azerbaijan as part of the EU’s economic investment plan. Yelena Ambartsumian, writing in Hyperallergic, notes that soon after obtaining the development aid package, Russia’s Lukoil increased its stake in Azerbaijan’s Shah Deniz natural gas project to almost 20% and a few days later, Azerbaijan and Russia signed an alliance agreement, a “Declaration on Allied Interaction.” The EU deal is undoubtedly influenced by concerns over its access to gas and oil as a result of the Ukraine war, but it is also seen as conceding to Azerbaijan’s demands after Aliyev expressed anger over the EU’s 2019-2021 grants of up to €2.6 billion total for Armenian development projects including  transport connectivity, energy efficiency and renewable energy, resilience and recovery of the southern provinces.

CPN recommends reading Tatevik Hayrapetyan’s analysis of the background to the grants and reasons why the EU has “casts into doubt its sincerity in supporting democratic values in the South Caucasus region” with these steps, and linked itself with an unquestionably corrupt, brutal, and authoritarian regime. See: Azerbaijan’s €2 billion shakedown, EVN Report, February 21, 2022.