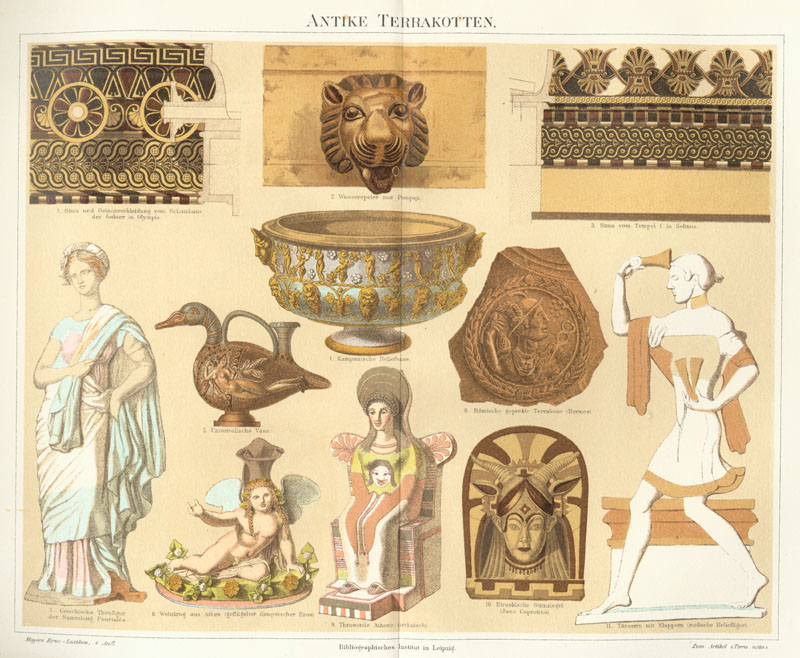 Antike Terrakotten, from Book 15 of the 4th edition of Meyers Konversationslexikon (1885–90). Wikimedia Commons.

However, implementing other elements of the EU proposals could severely limit sales of ancient and ethnographic art and non-European antiques. What the EU Resolution actually seeks is to restrict import and trade in categories of art and cultural goods far broader than the title implies – virtually the entire antiques and antiquities markets – and to enable ‘restitution’ to countries of origin in adherence to the principles of the 1995 UNIDROIT Convention on the Return of Stolen or Illegally Exported Cultural Objects.

The EU Resolution does not state specifically which ‘principles’ of the 1995 UNIDROIT Convention should direct EU policy, but it does imply that the EU should enforce other nations’ blanket export control laws and accept those nations’ definitions of what constitutes cultural patrimony. (In the U.S. under the 1983 Cultural Property Implementation Act, the U.S. Congress chose to make an independent decision about which cultural objects are threatened by pillage,  and barred specific types of objects from import.) The 1995 UNIDROIT Convention places the burden of proof on the possessor of an object to show that he “neither knew nor ought reasonably to have known at the time of acquisition that the object had been illegally exported” (Art. 6.1), regardless of how the possessor acquired the object, for example, as an inheritance, as the latest in a long line of purchasers, or, in the case of a museum, as the recipient of a donation.

The EU Resolution’s scope is expanded by conflating the trade in art without documented export permissions from countries of origin, with the Nazi looting of Jewish-owned artworks. The EU Resolution states that, “according to Interpol, the black market for works of art is becoming as lucrative as those for drugs, weapons and counterfeit goods.”  However, it neither dates nor cites the source for this Interpol claim, nor does it identify which works of art it is talking about – an important point, since the market for antiquities is a tiny fraction of the art market as a whole, being well under 1%. The antiquities trade, in which hundreds of thousands of artworks have circulated over many decades without documentation of the original export, is seen as equal to the wartime looting of cultural heritage. “Looted” and “illicit” are the terms applied to objects that have been traded without documented permission for export.

For example, The Resolution states as one of its premises that, “80 to 90 % of global antiquities sales are of goods of illicit origin.”

Yet very few sales of global antiquities are of objects that have recently entered the market. Within the market, a traceable ownership history showing that an object has not been recently taken out of a source country substitutes for an export permit. Such permits were rarely issued in any case, and if they were, are very unlikely to have been retained for decades. The importance of having a documented ownership history is shown by the fact that objects without it not only have the lowest market value, being virtually unsaleable in the U.S. and Europe, but are the least desirable to collectors and unacceptable as gifts to museums.

The EU Resolution is said to be an emergency measure in light of a supposed increase in looting for the Western market, stating that, “valuable artworks, sculptures and archaeological artefacts are being sold and imported into the EU from certain non-EU countries, with the profits potentially being used to finance terrorist activities.”

While the EU Resolution does recognize that, “further investigation is needed to shed light on the dark field of illicit trade in cultural property and to obtain better information about its scale, structure and size.” Unfortunately it takes as its example the ILLICID Project in Germany, which is focused on documenting financial flows in the field of organized crime and terrorism, rather than examining the realities of the art trade as a whole.

After years of unsupported claims in the media about Middle Eastern looting for profit by ISIS in the hundreds of millions, even billions of dollars, it has been accepted by many authorities that such claims were unjustified.

Even in 2016, when ISIS was at the height of its powers, the Dutch National Police, Central Investigation Unit, War Crimes Unit reported in Cultural Property, War Crimes and Islamic State:

“These claims are largely not supported by available government reports. (International and National) Customs Authorities have not reported growing influxes of illegal cultural property over their borders. Law enforcement agencies have not reported growing arrests of criminal art dealers or seizures of illegal cultural property from Syria and Iraq. Policy papers and studies do not present evidence that the illegal (online) art market flourishes and is overwhelmed with Syrian or Iraqi artefacts. Most museums have been evacuated and collections were hidden in secret storages, to prevent destruction and plunder. Media reports are rarely based on primary sources but rather copy each other’s headlines, leading to over exaggeration and unfounded estimates of IS revenues. Despite the lack of evidence for a large-scale illegal trade network benefiting IS, governments stress the importance of fighting this assumed vital source of income for IS.”

“82.Despite systematic consultation with Member States, the Monitoring Team has been unable to establish that ISIL ever generated significant funds from human slavery or sexual violence, although it was certainly massively engaged in such crimes on a basis internal to the so-called “caliphate”. Member States also broadly share the analysis that ISIL did not systematically or fully exploit the funding potential of looting and trading in antiquities and cultural goods. Nevertheless, it will not be possible to draw firm conclusions on this until more is known about what was taken, and until enhanced detection and enforcement efforts have yielded more information.”

Coming from the UN, that is a dramatic change in assessment, but the EU Commission and Parliament do not appear to have got the message.

The recently adopted Proposal for a Regulation of the European Parliament and of the Council on the introduction and the import of cultural goods alleged that there was a flourishing trade in antiquities supporting terrorism, these claims were not even supported by its own research, commissioned with Deloitte. In perpetuating this media myth, this EU regulation approved in December 2018 [Update: and adopted by the European Parliament on March 12, 2019] states that, “Looting of archaeological sites has always happened, but has now reached an industrial scale.”

These premises, however unsupported by fact, make clear that the EU’s January 17, 2019 Resolution is the result of continuing political pressure within in the European Parliament to eliminate the European antiquities market through a variety of legislative and policy vehicles, including by urging passage of new laws whose documentation requirements will simply be impossible for dealers and collectors to provide.

The Resolution makes note of the horrors of Nazi and other looting in wartime and the destruction of monuments by Daesh (ISIS) and government forces in the Middle East. It then enumerates the international and European conventions and laws enacted to halt these atrocities, from the 1954 Hague Convention for the Protection of Cultural Property in the Event of Armed Conflict to the 1998 Washington Conference Principles on Nazi-Confiscated Art, and the European Parliament’s Action Plan against terrorist financing of 2 February 2016 (COM(2016)0050). It states that only 1000-2000 artworks have been restituted to Jewish former owners since the 1998 Washington Conference, and that some 100,000 Nazi-looted artworks are still missing.

Using the example of the acceptance of principles of restitution to individuals who lost art during the Holocaust, the Resolution urges that similar principles should apply regarding the restitution of cultural objects to source nations. Curiously, however, the EU Resolution fails to mention the seizure of Jewish individual and communal property by Middle Eastern and North African (MENA) nations during forced expulsions of Jewish populations after the creation of Israel and the Six-Day War. Nor does it address the demands by members of expelled Jewish and Christian communities of rights to their art and artifacts, which have been nationalized by Iraq, Syria, Libya, Egypt, Algeria, and other MENA nations today.

The EU Resolution states that currently, claims for artworks are hampered by “the expiration of post-war restitution laws, the non-retroactivity of conventional norms, the lack of any definition of looted ‘art’, statute of limitations provisions on claims or the provisions on adverse possession and good faith.”

It acknowledges that UNESCO, museums and collectors are doing provenance research in order to return works to their owners, but regrets that there has been insufficient follow-up within the EU system to develop, “civil and procedural law rules, provenance research, cataloguing systems, alternative dispute resolution mechanisms and the value of creating a cross-border coordination administrative authority.”

The EU Resolution calls on the European Commission to “protect, support and encourage cross-border restitution claims of cultural assets displaced and misappropriated as a result of state-sanctioned acts of plunder or looted during armed conflicts.”

There are some obvious contradictions within the EU Resolution.  It states that EU legislative action should apply only to future transactions and not apply retroactively, while at the same time urging EU Member States to “harmonise the rules on provenance research and to incorporate some of the basic principles of the 1995 UNIDROIT Convention on stolen or illegally exported cultural objects.” UNIDROIT allows states to claim objects as unlawfully exported 75 years or more after the fact. At the same time, the EU Regulation also “welcomes” the EU regulations on import of cultural goods which came into force in December 2018, and which will deny EU import licenses to cultural goods without proof of lawful export from source countries unless the export took place prior to 1972.

The EU Parliament has thus effectively categorized all art without documented history of lawful export as “illicit.” Yet vast numbers of antiques and antiquities have entered global commerce since the 18th century.

The range of objects that would be covered if this proposal is adopted is vast. Almost all art-source nations outside of Europe and the US adopted laws in the late 20th or early 21st century nationalizing all art over 50-100 years of age and prohibiting its export. Few took actions to actually curb exports, and even fewer created export permitting systems except for restoration or temporary loans.

Regardless of the date of export, very few artworks and antiquities still have paperwork showing the terms of export in sufficient detail to meet EU standards for legal export. Egypt, the source of the largest number of antiquities in circulation, allowed legal export until 1983, but did not provide documentation sufficient to identify individual objects, merely certifying to boxes or cases of antiquities.

Together with the EU regulations adopted in December 2018, the January 17 Resolution institutionalizes myths about the art trade unsupported by evidence and discounted by the EU’s own investigations and research. It is regrettable that the positive steps urged by the EU in regard to return of Holocaust items and artworks looted in conflicts are undermined by its inaccuracies regarding the historical circulation of antiquities and antiques, and its unjustified characterization of public and private collections and the art trade as 80-90% illicit.