Dubious data on Cambodia from the Antiquities Coalition 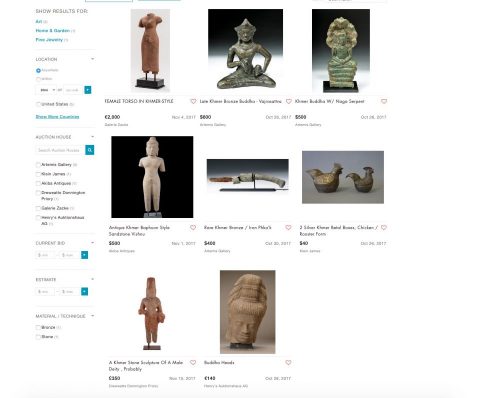 An advance report authored by Ms. Katie Paul is circulating on the Antiquities Coalition website and was presented in public testimony to the Cultural Property Advisory Committee (CPAC) meeting on the request for renewal of import restrictions by Cambodia. The report not only illustrates how easy it is to tell half the story to advance an agenda – but also how easy it is to challenge it. Cultural Property News spent an hour or so on the Internet after listening to Ms. Paul’s statement to the Cultural Property Advisory Committee, in which she asserted that there was a substantial US market for Cambodian antiquities, based upon online research at the popular LiveAuctioneers website. As a result of that hour or so of work, we beg to differ.

First, Ms. Paul claimed in her presentation to CPAC that the US was a primary market for Cambodian archaeological material, because a higher percentage of archaeological materials were items were “listed” in the US than abroad, and she had a pie chart to prove it. The problem? Based on a search for all “art,” 92.29% of all art items on LiveAuctioneers are from US auctions. The site collects overwhelmingly US-generated auction results. So her pie chart was not a comparison of US and global sales at all.

Second, the items reported by Ms. Paul are what she calls “cultural items.” This is not a searchable category on the website, but with our best efforts to include as many items as possible within search categories such as Khmer, Cambodia, antiquities, sculptures, or just plain “art,” we got no results near her numbers. What we did get were a lot of objects that could not possibly be considered objects of cultural heritage, including books, posters, dozens and dozens of recent medals, and tourist handicrafts. We also found that many ostensibly old items were obvious fakes made for the market.

Even counting these purported antiquities as real, we fell far short of her numbers.

Perhaps that’s because her results for “cultural items” were like those pictured here:

Cultural Property News suggest that instead of taking our word for it – after all, we only spent part of a morning – our readers could sign up themselves and see what sort of Cambodian or Khmer (which could also be Thai) artifacts are being sold, how much they sold for, and when. The Live Auctioneers website is free and all a visitor has to do to see all past auction results is to enter an email and password.

Another issue with taking the number of items offered for auction as demonstrating a vast American market, is that the majority of items listed did not sell at all.

LiveAuctioneers does not include results from Sotheby’s or Christie’s auction houses, these houses retain sales information as proprietary on their own websites. However, Sotheby’s and Christie’s results may be searched on their own websites, and as Cultural Property News has noted in the past, noted, a review of Sotheby’s New York’s online records from their New York house from April 2011 to 2017 shows sales of only three objects identified as Khmer, one with a collection history dating to 1968 and two deaccessioned from the Cleveland Museum of Art, both acquired in the 1930s. The last items Khmer sold without detailed provenance were auctioned in March 2011, when 6 were sold, two with 1990s provenances and 4 with 1960s dates, although the prior owners were not identified by name.

The search “Cambodia archaeological” resulted in 4 items only, three of which were unsold, and the one sold item was an iron tool, which sold for $50. Under “Khmer archaeological,” there were three items (one was a group of coins est. $45). None sold.

By far the most valuable items listed as either Khmer or Cambodia (five to ten times the high price of all others sold) were two statues sold by a company called Royal Fine Antiques Asia. Ms. Paul drew attention to these statues specifically in her presentation to CPAC. The prices ostensibly realized by this hitherto unknown auctioneer were $130,000 and $70,000.

This company is not a known US seller of antiquities. Its primary website is in Chinese. It states that it is a “leading auctioneer of Asian art in the Midwest,” but its locations (on two different websites) are listed as Fremont, California and New York. The website states that the auction house sells everything from prints and children’s books to antiquities. We are puzzled by the apparent contradictions.

According to the Live Auctioneers website, Royal Fine Art Antiques Asia sold 3 of the total of 6 listed Khmer items over $10,000, all in 2014. Two other items, a stone sculpture sold for $11,000 and a pair of bronze figures for $55,000, came from small, non-specialist US auction houses.

The Antiquities Coalition study could have revealed some useful information, but it chose to advocate for a position instead. All it does now is raise questions about her methodology. Certainly, her results do not seem to show that the United States remains a major market for Cambodian antiquities. But, take a look for yourself, and make up your own mind.

Ms. Paul hedges her bets, stating, “Of course, not all of these artifacts are “illicit” with regard to the 1970 UNESCO convention,” to which we say “Amen.”