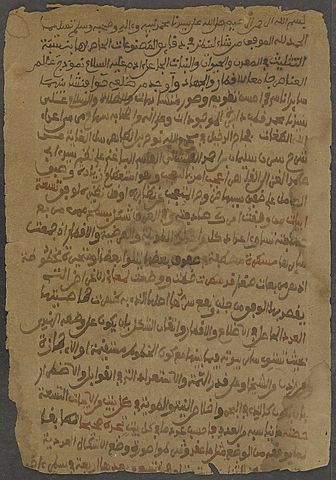 Timbuktu Manuscript, Sulaymān ibn Aḥmad, Explanation of the Work of al-Ghazali and Nuh ibn al-Tahir al-Fulani [Public domain], via Wikimedia Commons. Above: Aliu Amadu Jallo and his manuscripts for the Fulfulde Wikipedia. Taken by Guaka {{GFDL}} Category:Wikipedians in Africa

On September 19, the State Department announced a 5-year extension of a Memorandum of Understanding (MOU) with the government of Mali. The MOU prohibits the importation of virtually all ancient art from that country – and the accompanying Mali Designated List expands the scope of earlier MOUs to include a block on imports of manuscripts dating from the 12th to the 20th century as “ethnological materials.” In renewing and expanding the MOU with Mali, for the fourth time since 2002, the Department of State has cut off US museums and cultural institutions, as well as private collectors and individuals who share a Malian heritage, from acquiring art or artifacts from that country. And it has signed these four agreements, cutting off access for a total of 20 years, without once meeting the required criteria under the Cultural Property Implementation Act (CPIA).

There is no question that the ancient manuscripts of Timbuku deserve to be preserved, and that the libraries of Timbuktu are the proper place for them. Not only the art world, but the world in general knows this. There have been multiple virtual and photographic exhibitions about the extraordinary libraries of Timbuktu in the US and Europe, and many dozens of headline news articles describing the brutal destruction of Muslim shrines by extremists in Timbuktu and the heroic efforts by the city’s traditional hereditary librarians to safeguard the thousands of ancient manuscripts under their care.

But it was neither necessary nor lawful to impose import restrictions on these manuscripts when there is no evidence that a single manuscript has been brought to the US for sale and the other circumstances that call for an agreement under the Cultural Property Implementation Act are not met. Why pass a law against something that is not happening and is not likely to happen?

The Cultural Property Implementation Act works in two ways. It makes trade in art and artifacts stolen from the inventory of an institution, museum, church, or library illegal without the necessity of imposing any trade restrictions. Second, it allows the US to impose trade restriction in certain limited situations.

A MOU can only be signed if there is current looting taking place in Mali of the types of objects on the proposed list of items restricted from import, AND if the government of Mali is working to protect archaeological sites, AND if the US is a primary market nation for art recently looted from Mali, AND if there will be a substantial benefit to Mali if the US market for the items restricted from import is stopped. (If the US is not a primary market for the items listed, then there will be no substantial benefit from imposing import restrictions.)

Finally, there must be no less drastic remedy than cutting off all imports to ameliorate the problem of looting, and signing an agreement to prohibit imports must be “in the general interest of the international community in the interchange of cultural property.”

In order to meet the legal requirements of the statute, ALL the criteria above must be met. There is no evidence showing this is true.

The Association of Art Museum Directors (AAMD) submitted comments on the proposed MOU back in March of 2017. However, the required federal notice was issued only five days prior to the deadline for written comments, and the federal notice only mentioned renewal of restrictions on antiquities up to the mid-18th century. Since there was no mention of manuscripts or ethnographic materials, the AAMD did not address this question.

The AAMD had been disappointed with the failure of the Malian government to hold up its end in past bilateral agreements on cultural property. It stated:

“There is an argument that the fluid and hopefully temporary conditions in Mali do not warrant a long-term memorandum of understanding under the CPIA. Rather, Mali should make a new request for a temporary emergency restriction addressing the conditions in the areas of the country subject to looting and destruction. If the Committee decides to recommend renewal of the MOU, the Committee is uniquely positioned in its report to recommend steps to augment support for Mali through reasoned amendments to Article II as discussed below.”

In its submission to the Cultural Property Advisory Committee, the AAMD was willing to support a renewal if the agreement required specific actions by the government of Mali, as follows:

“The Committee should recommend that, if the MOU is extended, it contain a defined commitment by Mali to foster cultural exchange with American museums, not only to allow, but encourage both exhibition and long-term loans of significant objects.”

The AAMD also enumerated instances where important cultural patrimony was saved by temporarily removing it from the danger zone in times of crisis. It strongly urged that the MOU “be amended to create an undertaking by the United States, at the request of the Government of Mali, to use its best efforts to become a safe haven for cultural heritage by assisting in finding depositories for objects that are subject to potential destruction, with a commitment to return those objects whenever the Government of Mali deems appropriate.”

And the AAMD made an essential point that is applicable today not only to Mali but also to other nations experiencing war and civil strife:

“As the Committee considers these safe-haven concepts, it should bear in mind one unequivocal point: this is not about acquiring works of art. This is about saving a nation’s cultural patrimony. One need only look at the AAMD website on acquisitions of archaeological material and ancient art to see that AAMD members have nothing to do with the commercial exploitation of art looted during Mali’s civil and political unrest. On the contrary, American museums and American museum professionals have long shown a dedication to the protection of cultural property in times of unrest. From the Monuments Men to museum curators on the ground in Iraq, American museum personnel have been at the forefront of efforts to rescue objects and sites from destruction and looting. In this instance again, American museums and their professional staffs – curators, conservators, and registrars – can play a vital role in protecting and preserving for all humanity the great works of art threatened by the extremists in Mali. Furthermore, implementing this type of program can provide a model for other cultures in danger of extinction, Syria, Iraq and Egypt being just a few examples.”

There is no indication yet from the Department of State that the MOU just signed with Mali requires any such defined commitment by Mali to foster cultural exchange and encourage both exhibition and long-term loans, or to participate with US museums in actually saving Mali’s irreplaceable cultural heritage.