Artworks and objects give focus to interactive learning for aspiring citizens 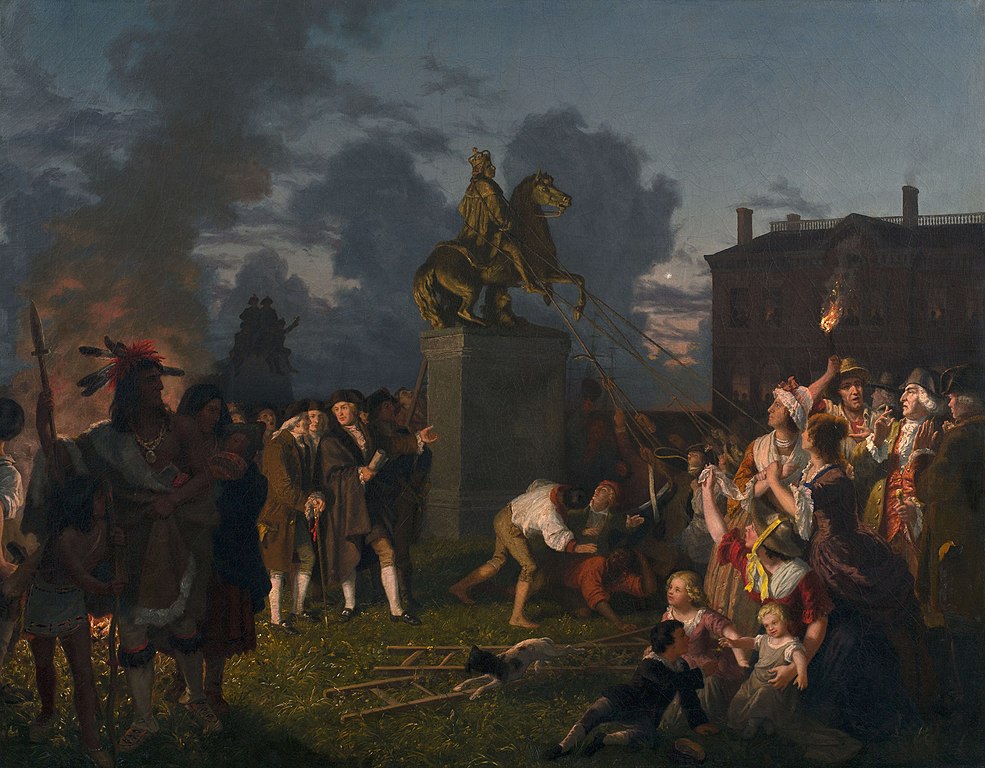 Obtaining U.S. citizenship is a difficult and daunting task for many immigrants, even for those who have lived and worked legally in the U.S. for many years. A key part of the application process is to pass an oral civics test administered in person by an officer of the United States Citizenship and Immigration Services (USCIS) during a naturalization interview. The applicant must correctly answer questions that require knowledge of American history and the operation of U.S government and its laws.  The test is one of three elements of the interview, which includes questions about the applicant’s application and background. The officer also conducts an English test with three components: reading, writing, and speaking.

Each applicant is asked ten of one hundred possible questions and must answer six correctly to pass the civics test. Questions range from the straightforward  “Who was the first President?” to the more challenging, “Who was President during World War I?” (Woodrow Wilson) and “The Federalist Papers supported the passage of the U.S. Constitution. Name one of the writers.” (Madison, Hamilton, Jay, and Publius)

They can even be tricky.  “What is one thing Benjamin Franklin is famous for?” No, describing the key and kite experiment is not one of the correct answers listed – although “being the first Postmaster General of the United States” is acceptable.

The vast majority of applicants for citizenship have already achieved Lawful Permanent Resident status. In other words, they have a Permanent Resident Card, known as a “Green Card,” and live and work in the United States legally. Since the attacks on the U.S. on September 11th, 2001 there have been increased restrictions on obtaining citizenship; restrictions on foreign travel became much more stringent after January 27, 2017 when President Donald Trump issued a ban preventing citizens from seven Muslim countries – Iran, Iraq, Syria, Sudan, Libya, Yemen, and Somalia, from entering the United States. This order also initially affected Green Card holders from those countries, who needed a waiver to return to their homes in the U.S. if they were abroad. In the legal confusion that ensued, many Green Card holders feared that they would lose their ability to remain in the United States because of their country of origin and sought to become citizens, since once it is lawfully bestowed, citizenship is very difficult to have revoked. 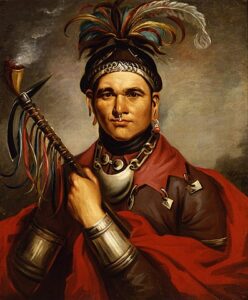 According to Jennifer Schantz, in 2017 the NYHS noticed, “that many green card holders were getting ensnared by the travel ban.”

“So [NYHS] decided to take our collection and materials and marry them around the 100 questions on the naturalization test to allow green card holders to have a deeper understanding of history, civics, and government.” She said.

The resulting Citizenship Project was designed to use specific artworks and objects in the collection as prompts to help applicants to answer the questions on the civics portion of the naturalization interview by creating visual context for the answers.

The process, which is increasingly used by museums in their role as educators, is called “object based inquiry”. As Jennifer Schantz noted in her discussion, “Rather than memorizing by rote, it’s more interactive, they work in groups, they think collectively about the works and objects.” In the process Green Card holders seeking U.S. citizenship not only learn about U.S. history, government, and the answers to the naturalization test, but also “learn to look at art, objects, and material culture in a very critical and thoughtful way.”

A documentary on the project, Out of Many, One, highlights how “object based inquiry” works within the context of the Citizenship Project. In one scene from the documentary, project participants are standing in front of the painting Pulling Down the Statue Of King George III, New York City by Johannes Adam Simon Oertel. The gallery label on the Society’s website says “this painting documents the destruction of the gilded lead statue of King George III of Great Britain in Bowling Green, N.Y., by the New Yorkers and Continental soldiery after the Declaration of Independence had been read to Washington’s troops on the Commons on July 9, 1776. Fragments of the statue and the stone base on which it stood are preserved in the Society’s collection.” This is something the participants have not yet read.

Instructor and Citizenship Project manager, Samantha Rijkers, herself an immigrant from the Netherlands, asks “Let’s look at the painting. What do you notice?”

“People getting hurt.” notes one individual, observing a cluster of men that appear to have fallen to the ground. Another person says, “They’re trying to take down that horse.” “So it’s a horse.” Samantha says, “What else can you tell about the statue [of the horse in the painting]?” Many in the group chime in, “There is a King on the horse.”

“How do you know it’s a King?” Samantha asks. “By the Crown!” the group agrees.

Samantha Rijkers reveals that it is King George III of England. She tells the story of the painting, that on July 9th, 1776 the Declaration of Independence reached New York City after five days of travel from Philadelphia. George Washington’s soldiers were so excited by the news that a small group of them ran to the statue of King George III on horseback and pulled it down. She then pointed out an actual remaining fragment of the statue hanging on the wall above them, the tail of the horse.

“So let’s bring it back to the test.”  Samantha says. “When was the Declaration of Independence adopted?” “July 4th, 1776,” the group replies in unison.“That’s right!” says Samantha. “It took five days for the Declaration to reach New York.”

She continues,  “And this is what it would have sounded like if you were at the common on July 9th, 1776: We hold these truths to be self-evident, that all men are created equal, that they are endowed by their Creator with certain unalienable Rights, that among these are Life, Liberty and the pursuit of Happiness…” 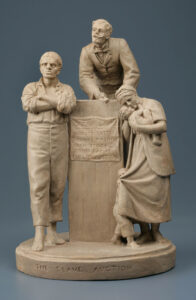 Elements of the preamble of the Declaration of Independence are on the test. So are questions about slavery and the Civil Rights Movement of the mid-twentieth century. The subject of slavery takes the group of prospective citizens to a sculpture depicting a slave auction and a discussion of the causes of the Civil War. Later, they watch archival videos of a speech by Martin Luther King.

The Citizenship Project launched in July 2017 and to date has hosted nearly 3,000 participants. Currently it can be accessed online. Prior to the onset of COVID-19, the New York Historical Society (NYHS) had begun to expand the project nationally by reaching out to museums, presidential houses and libraries and inviting them to use the curriculum and to modify it with items from their own collection.

As Jennifer Schantz explained,  “For instance, we’re partnering with the Lyndon B. Johnson house.[2] When he was president he was instrumental in passing laws related to civil rights and immigration. His library was interested.”

When NYHS partners with an outside entity, an educator of the Citizenship Project sends the curriculum and then travels to the site to meet and train their educators in how to use object based inquiry. The NYHS educators make suggestions about which objects could be replaced or substituted. Then the individual homes, museums, and libraries are able to promote the programs themselves.

“We found that many institutions pre-COVID were very interested.” said Schantz. “They are trying to figure out how to help. They want their collections to have an impact and to transform lives. They also are very eager to figure out ways to attract new members of the community to their museum. We’re always looking for ways to expand our reach. “

Other ways that the New York Historical Society has expanded its reach and provided opportunity for people seeking citizenship include free family days and group tours for aspiring Americans to allow them to access the exhibits. The New York Historical Society has hosted naturalization ceremonies in its four hundred seat Patricia D. Klingenstein Library in partnership with United States Citizenship and Immigration Services (USCIS). 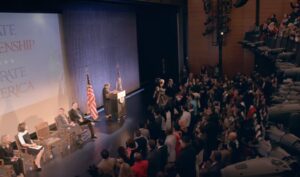 Screenshot of Justice Ginsburg administering the Naturalization Oath of Allegiance at the New York Historical Society, From the documentary Out of Many, One.

Impressed with the Citizenship Project, U.S. Supreme Court Justice Ruth Bader Ginsburg asked to preside over a naturalization ceremony at the New York Historical Society. Jennifer Schantz said that this was one of the highlights of her life. She explained, “To have [Justice Ginsburg] visit us, and walk onto the stage and to see the people who were about to become naturalized citizens react to her presence was just amazing. She spoke beautifully, of course. I think it was a great way to honor those who were striving to be American. As an attorney, it was a highlight to have met her in this capacity.”

Justice Ginsburg’s address to the newly sworn citizens and administration of the Naturalization Oath of Allegiance to the United States of America can be seen in the documentary, Out of Many, One, available on Netflix.

The in-person teaching at the New York Historical Society is suspended due to the Covid-19 crisis, but the Citizenship Project[3]is still available free through an online interactive course where “participants learn about American history and government using objects, paintings, and documents from the New-York Historical collections through videoconferencing.”

To learn more about the Citizenship Project or to sign up for the online citizenship course, please visit: https://www.nyhistory.org/education/citizenship-project

For information on how to apply for U.S. Citizenship, please visit: https://www.uscis.gov/citizenship/learners/apply-citizenship

[1] When Jennifer Schantz spoke to the American Bar Association’s Art & Cultural Heritage Law Committee on May 14, 2020 she had been newly appointed as the Barbara G. and Lawrence A. Fleischman Executive Director at New York Public Library for the Performing Arts at Lincoln Center.

[2] The LBJ Ranch home (known as the Texas White House) is located at the LBJ State Park and Historic Site at Stonewall, Texas. The Lyndon Baines Johnson Library and Museum is located in the University of Texas at Austin.