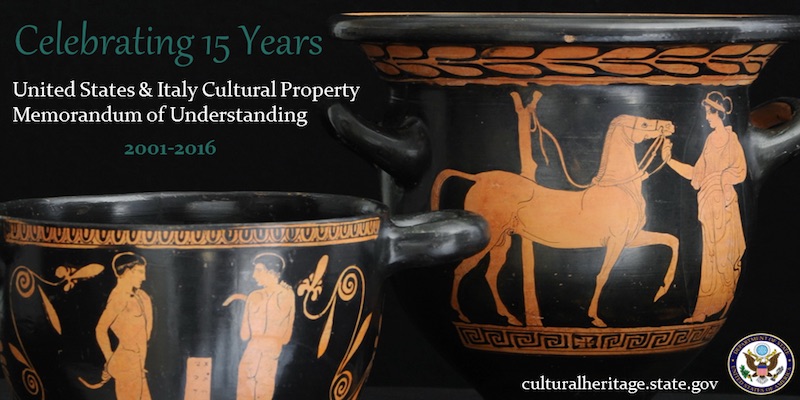 It is shocking to see the website of the Department of State’s Bureau of Education and Cultural Affairs announce a “celebration” of the 15th anniversary of the the bilateral agreement banning the importation of ancient art from Italy. Since when are continuing restrictions on the free flow of art into the US regarded as cause for celebration?

Congress recognized that import restrictions are a loss to the US public’s interest in a free trade in art. Under the Convention on Cultural Property Implementation Act (CPIA), signed into law in 1983, agreements with foreign nations restricting the importation of antique and ethnological material are a special and drastic remedy to be applied in situations of looting that place a foreign nation’s cultural heritage at risk.

According to Congress, import restrictions are not to be undertaken lightly. By law, agreements restricting trade in art are to be put in place only when absolutely necessary to protect a foreign nation’s patrimony, only when other nations also establish similar restrictions, and only when the source nation takes meaningful steps to protect its own archaeological resources.

As Mark B. Feldman, the key State Department negotiator in the drafting of the CPIA, wrote in comments prepared for a CCP-sponsored Symposium at Cardozo Law School in April 2014, “The purpose of the program is not to keep art at home, but to help protect archeological resources from pillage; the findings required by the CCPIA were established for that purpose.”

CCP recommends re-reading Feldman’s important paper on the negotiations resulting in passage of the CPIA, and the subsequent changes in U.S. policy.

In “celebrating” the Italian renewal, at least the State Department is being frank, for once, and acknowledged that it is not a neutral administrator of the law: its goals are diametrically opposed to those expressed by Congress: to encourage restrictive policies in foreign nations, to promote repatriation over preservation, and to eventually end the global trade in ancient art.

In 2000, the Department of State secured the administration of the CPIA. Since then, the department has fulfilled the worst fears of Congress when in 1983, the legislation originally placed the CPIA’s administration outside it in order to keep art from becoming a diplomatic Band-Aid or a trade-off for concessions in other areas.

The Italian renewal of import restrictions took place this year after fifteen years in which the Italian Carabinieri have made very significant inroads into illegal activity involving antiquities in that nation. Yet Italian authorities remain firmly opposed to establishing an export regime in which permitted antiquities could be lawfully traded.

Italy is not alone is asking the US to permanently limit the American public’s access to art. Virtually every agreement signed by the US restricting importation of ancient art is now an agreement-in-perpetuity; some now stand at almost thirty years. They are supposed to last for five.

What does a 30-year import restriction mean, besides that the agreement was not effective in stopping looting, or that it did not convince a nation to protect its own archaeological resources? It shows that Congress and the US public are not paying sufficient attention, and that neither realizes what the nation and its cultural resources have lost. Is that really something to celebrate?