History in Ashes, Art on the Rocks 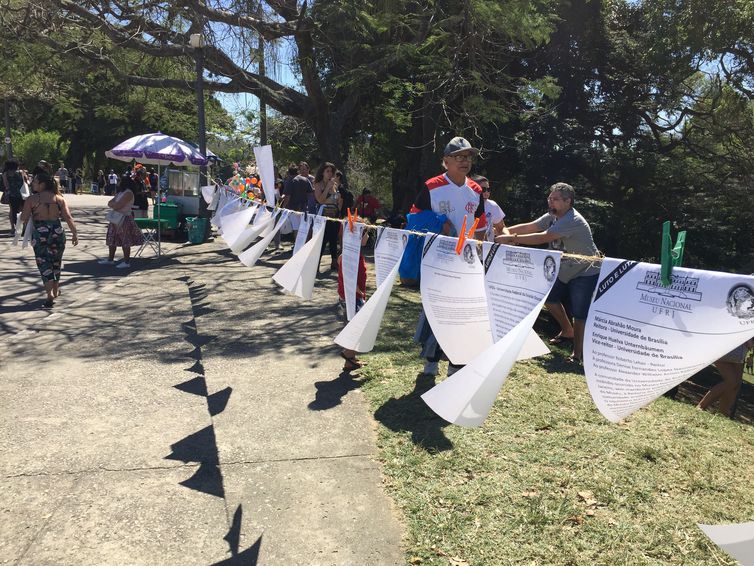 In early September 2018, the world watched in horror as the National Museum of Brazil in Rio de Janeiro burned to the ground. A two hundred-year-old building, the records of generations of research, and most of the twenty million artifacts in the collection were gone forever. Decades of budget cuts, leading to neglect of fire safety precautions, had made the building vulnerable. Sadly, in the wake of this catastrophe, Brazil’s cultural sector has suffered another serious blow. The new Brazilian President Jair Bolsonaro has made his lack of care for the arts, for history, and for scholarship perfectly clear by dissolving the Ministry of Culture.

The National Museum fire illuminated a growing tension between the arts, culture and the Brazilian government. The day after the fire, then Presidential candidate Jair Bolsonaro declared his intent to reduce the Ministry of Culture to a secretariat and defended his plans to revise the Rouanet Law, which provides funding and tax incentives for the arts and cultural projects, citing its provisions as a drain on public funds. He kept his promise; on Bolsonaro’s second day in office, he dismantled the Ministry of Culture.

Bolsonaro hasn’t been the only Brazilian government official to take aim at the Ministry of Culture, the Rouanet Law, or the arts in general. His presidential predecessor, Michel Temer, tried to extinguish the agency in 2016 but reversed course under public protest; in 2018 a bill to repeal the Rouanet Law was introduced in the Federal Senate but was rejected; and public attitudes towards contemporary artists have become increasingly hostile with the rise of nationalism and fundamentalism in Brazilian society.

Artists have reported being attacked and threatened through online media and in person. A common accusation leveled at artists is that they are freeloading off the Rouanet Law. Others have had their work branded as immoral and have faced censorship and protests from conservative political groups, especially in the years just prior to the last presidential election in 2018.

The anti-art, homophobic, sexist, and racist views of President Bolsonaro have added fuel to the cultural conflagration.

Some see the targeting of art and culture as a deliberate distraction by government officials. As São Paulo-based artist Ana Prata told artnet News in their November 30, 2017 article Death Threats, Intimidation, Censorship: Inside the Far Right’s Assault on Brazil’s Art Scene, “These attacks directed at art institutions and individuals are a way to change the debate into a moral issue to avoid talking about economic injustice, corruption, and civil rights that are being removed. We had a coup last year, and in my opinion everything that is happening is a consequence of this.”

Diversion and distraction are common political tactics. It is difficult to see how genuine concern for government expenses alone could be driving the backlash against the arts. As Mariana Simões noted in her Hyperallergic article Brazil Dissolves Its Ministry of Culture, “data shows that funding for the arts isn’t what’s draining the national budget. According to the Institute of Applied Economic Research (IPEA), the percentage of public resources allocated for cultural policies over the past decade have always represented far less than 1% of the total federal budget.” In 2015 studies from the IPEA showed the number to be even lower, less than a tenth of a percent.

This brings us back to the National Museum of Brazil and the devastating loss of cultural heritage. Multiple news sources reported in the aftermath of the fire on the lack of funding and neglect that had plagued the museum in the years preceding the fire. According to Michael Greshko in the National Geographic article Fire Devastates Brazil’s Oldest Science Museum, the institution hadn’t received its full annual maintenance budget of $128,000 since 2014. In 2018 it received only $13,000.

The museum had to close its doors at the end of 2015 due to lack of funds and in 2017 needed to use crowdfunding to generate funds for repairs to the base of the plinth for the bones of the Maxakalisaurus dinosaur, which had been severely damaged by termites.

Prior to the fire, some funding had been approved to renovate the museum and upgrade the fire prevention system. Now that money, what little there is of it, will go toward the slow, painful process of rebuilding the museum, a process that some estimate could take over a decade. That is, assuming Brazil’s new president does not cut its last lifeline.