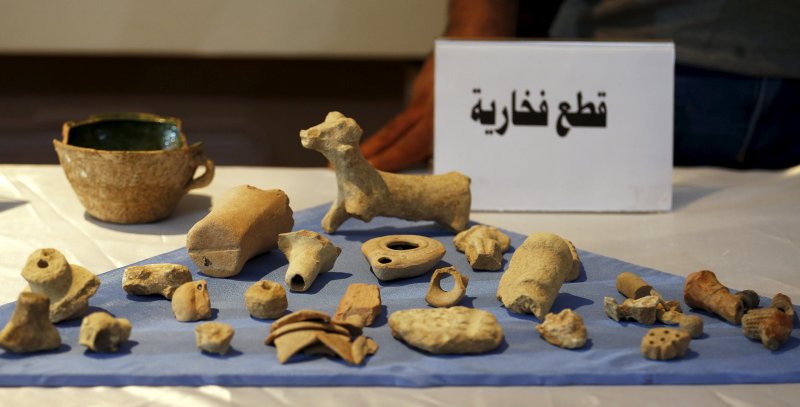 Treasures returned to Iraq by the US. Courtesy Homeland Security Investigations.

March 31, 2016.  The Antiquities Coalition has created a “#CultureUnderThreat Task Force Report,” to be launched mid-April. A draft of the Proposed Solutions outlined in this report was circulated in February, asking for comments on approximately 40 recommendations contained in the draft report.

Regrettably, while some suggestions are meritorious, and would direct US military and diplomatic attention to preventing cultural damage and preserving cultural heritage intact, the report’s chief purpose appears to be to create a sense of crisis (using highly inflated claims about the trade in looted art) that will prompt draconian trade restrictions.

The report focuses primarily on US actions outside of the regions of conflict, calling for everyone from the National Security Council to the Peace Corps to become culture cops.

The report deliberately avoids discussing the failure of source countries to give more than lip service to domestic cultural needs. It does not mention policing sites or cracking down on insider theft and neglect and corruption. According to this Task Force Report, the only governmental organizations without any responsibility for cultural heritage are those in source countries.

As the email accompanying the draft states, “On the note of source countries, we are in complete agreement that the illicit trade must be attacked from all ends, confronting both supply and demand. However, for the purposes of this report, which again is US geared, we felt that we could not give justice to recommendations for source countries. We hope that a future report will tackle this important question.”

Finally, the report relies on debunked data, discredited reports, and phony “facts” about the volume and value of a supposed multi billion dollar trade in antiquities as justification for what amounts to a repression and criminalization of the art market.

Alternative Solutions NOT Discussed in the Report

This is not a reasoned approach to reducing looting and unlawful trade.

Alternative approaches to the Antiquities Coalition’s Task Force Report are to beef up security at Syria’s borders and dramatically increase enforcement in neighboring countries. Such actions would send the most direct message to discourage people who would profit from archeological depredation.

As a former high ranking Customs official, James McAndrew, has stated, the most effective work ever done to halt looting in Iraq was through cooperative engagement between US law enforcement and cultural officials and law enforcement in the countries neighboring Iraq.

The international art trade is very concerned. Events have shown that art dealers and collectors agree with archeologists that Syrian heritage should be preserved in situ. The trade has demonstrated not only due diligence but also a determination not even to take a chance on buying anything looted. Museums, collectors, and the trade can be helped in this area by law enforcement agencies promptly providing information on known looted objects to the public. Stopping looting is truly an arena in which all of these parties’ interests are aligned.

Current technology could not only help to track stolen objects but also to enable a lawful, global, trackable trade, with artifacts being registered with photos and digital tracking numbers. The trade has expressed interest in the past in developing a workable system for enabling claims and for giving repose to artworks long out of the ground.

Note: The Task Force Report proposes using a tracking system for antiquities such as the one used for authenticating diamonds as lawfully dug – without mentioning that source countries are not willing to authorize any export of antiquities whatsoever.

A key concern is to stop the press frenzy and hyperbole about billion dollar markets, which encourages poor and displaced people in the region to take up looting. Rather, all concerned should stress the fact that art dealers and collectors and archeologists are in agreement that looted materials should not be bought or sold and that archaeological sites should be protected. Law enforcement should make public the information on known looted objects in order to assist museums, collectors, auction houses and the trade in doing due diligence.