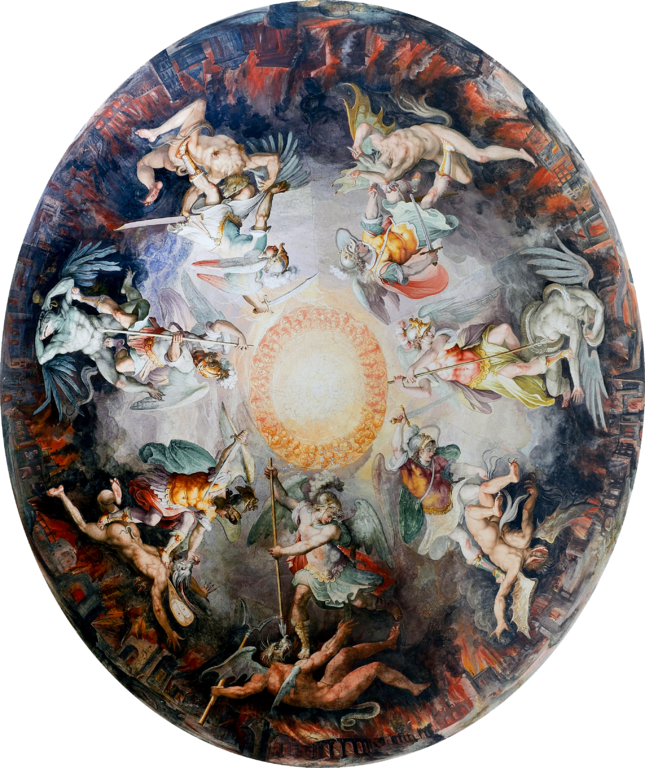 “I believe the world will be saved by beauty.”   Prince Lev Nikolyaevich Myshkin, The Idiot, by Fyodor Dostoevsky.

“This world in which we live needs beauty in order not to sink into despair. Beauty, like truth, brings joy to the human heart and is that precious fruit which resists the erosion of time, which unites generations and enables them to be one in admiration!”   Second Vatican Council, Message to Artists, 8 December 1965: AAS 58 (1966), 13.

The CPN staff, working from our home offices during New Mexico’s lockdown, extend our warmest wishes to our readers. We hope these links to virtual travel within sacred spaces will provide a brief respite from daily care.

Passover, Easter, and Ramadan in Jerusalem 2020 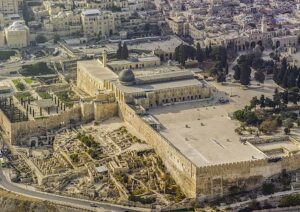 Aerial (ESE) exposure of Al-Aqsa Mosque on the Temple Mount, in the Old City of Jerusalem. Al-Aqsa is considered to be the third holiest site in Islam after Mecca and Medina. Submitted by Godot13, 15 November 2013, Attribution: Andrew Shiva / Wikipedia / CC BY-SA 4.0.

For the first time since 1992 the three major Abrahamic religions, Judaism, Christianity, and Islam, will celebrate their most significant holidays within the same month.

Passover is celebrated from April 8 through April 16. The Christian Holy Week begins on Sunday April 5 and culminates with Easter on April 12. Orthodox Christians celebrate Easter a week later on April 19. The holy month of Ramadan begins April 24; it is expected to end with the sighting of the new moon on May 23, 2020.

Ordinarily, hundreds of thousands of pilgrims visit holy sites in the Old City of Jerusalem during these observances each year. In order to avoid transmission of the virus during this year, the city of Jerusalem is hoping to reach the observant instead through modern technology. One means of traveling to holy sites is through a Stereo 360 virtual reality (VR) documentary “The Holy City.” Access to the documentary, which in trailer form appears more dramatic than restful, will be offered for free beginning April 9; until then it can be purchased. View trailers of “The Holy City” here.

A virtual self tour is available of the Church of the Holy Sepulchre with 360 degree panoramas. There is a live webcam available online from Jerusalem, with a view over the Western Wall and Temple Mount.

Inside al-Aqsa: A 360° tour of Jerusalem’s holiest mosque is a production of Al-Jazeera English channel. This seven minute video provides a simple 360° walk-though and identification of the buildings and interiors of the Al-Aqsa complex, ending with references to the Arab-Israeli conflict.

The Vatican Museum – Closed to the Public, but Open to Virtual Reality Tours 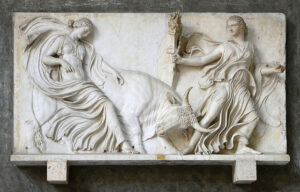 The Vatican Museum website offers virtual tours of the Sistine Chapel, the Niccoline Chapel, Raphael’s Rooms, as well as the pontifical collections of classical sculpture in the Pio Clementino and Chiaramonti Museums, including the museum’s New Wing. Further exploration of the website will lead one to videos, pictures, and the history of the museum, Vatican, and the papacy’s relationship to art.A

John Paul II wrote in his 1999 Letter to Artists:

“Even beyond its typically religious expressions, true art has a close affinity with the world of faith, so that, even in situations where culture and the Church are far apart, art remains a kind of bridge to religious experience. In so far as it seeks the beautiful, fruit of an imagination which rises above the everyday, art is by its nature a kind of appeal to the mystery. Even when they explore the darkest depths of the soul or the most unsettling aspects of evil, artists give voice in a way to the universal desire for redemption.” 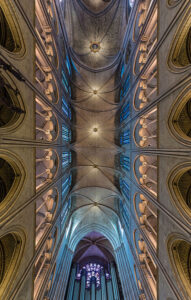 On April 15, 2019, the world watched in horror as Notre Dame Cathedral in Paris, France burned. Although the spire and most of the roof were destroyed, the iconic stained glass rose windows and many works of art were spared. The structure has since been closed for restoration. However, through the pairing of a number of immersive VR videos, one can continue to experience some of the grandeur of the cathedral.

Click and drag the video image to explore the cathedral in “The Man Behind Notre Dame” while Patrick Chauvet discusses his experience as Rector-Archpriest of Notre Dame. “A Homage to Notre-Dame in 360 VR” is a visually stunning interior and aerial exploration of the Cathedral to the music of Duo des Fleurs (sung ostensibly by Lakmé, the daughter of a Brahmin priest, and her servant Mallika) from the Léo Delibes opera. This video is also a VR experience, just click and drag on the screen to view different perspectives of the frame. Samsung’s 2017 “The Cathedral of Notre Dame de Paris | a 360o VR Experience” is a brief, narrated, tour of the French Gothic structure prior to the fire. 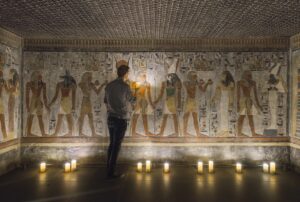 As part of the Theban Necropolis Preservation Initiative, a section of the tomb of Seti I that is being recorded in Luxor will be reproduced to be installed in the Antikenmuseum in Basel in mid-end 2017. The facsimile will then be transported to Luxor, where it will be installed in its permanent location at the Valley of the Kings. The sarcophagus recorded in the John Soane museum will also be reproduced in Alabaster as part of this exhibition.

Read the interview with Elizabeth Bolman on the Red Monastery Church in these pages, and the webpage dedicated to additional images, then view the video narrated by Dr. Bolman and the spectacular but silent 3D virtual tour of the Red Monastery, conserved over a twelve year project sponsored by the US Agency for International Development, administered by the American Research Center in Egypt with the cooperation and support of the Egyptian Supreme Council of Antiquities and the Egyptian Coptic Church.

Then take a stunning and utterly silent trip through Factum Arte’s 3D tour of the tomb of Seti I, derived from data recorded with a FARO Lidar scanner in November 2016 by Pedro Miró. 3D animation and video editing by Jorge Cano. (Use the settings button on the bottom right to adjust the quality if your browser is slow.) For detailed information on the Factum Foundation’s regeneration of the 3,200 year old tomb, visit the project’s Factum Foundation page.

A documentary program from Focus on Armenia on the proposed re-restoration of the 9th century Tatev Monastery in southern Armenia is a short narrated video, not virtual reality, highlighting the destruction of a 1931 earthquake and a deeply flawed reconstruction in the Soviet period.

Art and Archaeology in India 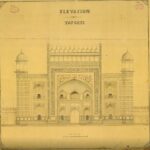 Elevation of the Taj Gate, Archaeological Survey of India.

The Archaeological Survey of India – In this Google Arts & Culture site there are a number of online exhibits that explore the ancient places of the Buddhist, Hindu, and Muslim cultures that shaped India. Nalanda: From Mound to Monument tells the story of the rediscovery and excavation of the 5th – 12th century university that influenced Buddhism in the Asian world.  The Wonder that is Taj exhibit provides numerous opportunities to tour India’s famed Taj Mahal in virtual reality.  Vignettes of Ajanta & Ellora features the paintings and stone carvings in two cave complexes dedicated to Hindu, Buddhist, and Jain religions. These are just a few of the many Archaeological spaces to explore and art to view in The Archaeological Survey of India.

Persepolis: Images of an Empire – View stunning archival photography of the ruins of this important royal complex of the Achaemenid Empire (ca. 550–330 BC) from the Oriental Institute of Chicago. Captions describe the images and offer insight into the early excavation and restoration of the site.

Experience Sakura, Japan’s cherry blossoming and its many Buddhist locales

The coronavirus pandemic has disrupted the Japanese public’s experience the over 1,000 year old tradition of Hanami, or cherry blossom viewing. Each year people all over Japan hold parties and events to celebrate the blossoming of Sakura (cherry blossoms).  In 2019 close to 3 million foreign visitors came to Japan for the season. This year COVID-19 is preventing the gatherings. However, there are many Sakura VR experiences online. By going to Japan’s Weather News site, and typing ‘Cherry Blossom VR’ in the search bar, dozens of virtual reality videos appear. 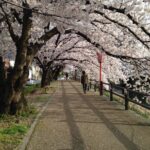 A surprising number of cultural and religious sites in Japan may be viewed in 360 VR. Here are a few.

Fushimi Inari Shrine – A protracted journey through the more than 10,000 Torii gates of the main Shinto shrine in Japan is not yet available through video, but even a brief stroll is an experience not to be missed. A 45 minute, non-interactive video of the Fushimi Inari Shrine with blessedly casual production values and no music or narration, just the muted talk of fellow visitors, click here. 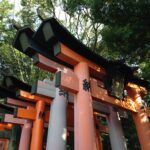 Shinto is a traditional practice of Japan. The majority of Japanese participate in Shinto practices or rituals. Most Japanese and scholars consider it inaccurate to call it a religion, as it has no dogma or scripture. Shinto is animistic in nature and revolves around the veneration of kami. There is not a direct translation into English of the word and many feel that to try to translate kami is misleading. However, the kami are considered to be an entity or phenomena that exists in all things.

Buddhism first came to Japan around the 6th century CE. It has developed into many different forms over the centuries. In current times the most popular are Pure Land Buddhism, Nichiren Buddhism, Shingon Buddhism, and Zen. These each have their own branches and practices but the architecture of their temples and other buildings is world renowned for its beauty. The city of Kyoto was spared during WWII and so retains much of its prewar culture.

Some 360 VR experiences of Buddhist sites in Japan:

Temples in Kyoto affiliated with the Shokoku-ji branch of Rinzai Zen Buddhism:

Shokoku-ji – Explore the temple and grounds of the headquarters of the Shokoku-ji branch of Rinzai Zen.

Kinkaku-ji – Popularly called the Golden Pavilion (Kinkaku), the temple was made to house the sacred relics of the Buddha and is an UNESCO World Heritage.

Teisyouji Soto Zen Buddhist Temple in Saku, Japan – These interactive panoramas are stunningly beautiful. Though each panoramic image has to be opened separately, it is worth the effort.

Ninnaji Temple Pagoda  – Part of the Ninnaji temple complex, which is the head temple of the Omuro School of Shingon Buddhism. Ninnaji is a World Heritage Site.

Video and VR of other Stunning Buddhist Sites Around the World 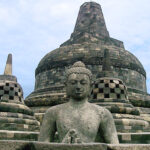 Borobudur, Indonesia – In central Java, Indonesia lays the largest Buddhist temple in the world. Currently closed to the public due to COVID-19 concerns, this video captures some of the magnificence of this 9th century site. Watch it in conjunction with this aerial footage.

Shwedagon Pagoda – Located in Yangon, Myanmar, the golden Shwedagon Pagoda is said to contain the relics of four Buddhas including eight hairs of the historical Buddha, Gautama Buddha.

The video Bagan – Myanmar: The Ancient temples and the common life visually weaves together scenes from daily life in and around the temples, pagodas and stupas of the  Bagan archaeological zone in Myanmar.

The Leshan Giant Buddha, a 233 ft carved statue of the Buddha Maitraya, has been patiently 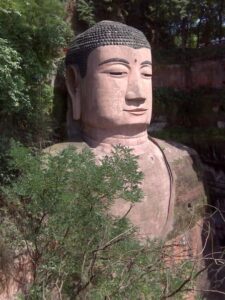 watching over the confluence of the Min River and Dadu River near the city of Leshan in Sichuan province in China since the Tang Dynasty. This interactive VR panorama allows a fairly detailed look at the largest and tallest stone Buddha statue in the world.