Uzbekistan Leads the Way in International Collaboration on Cultural Heritage 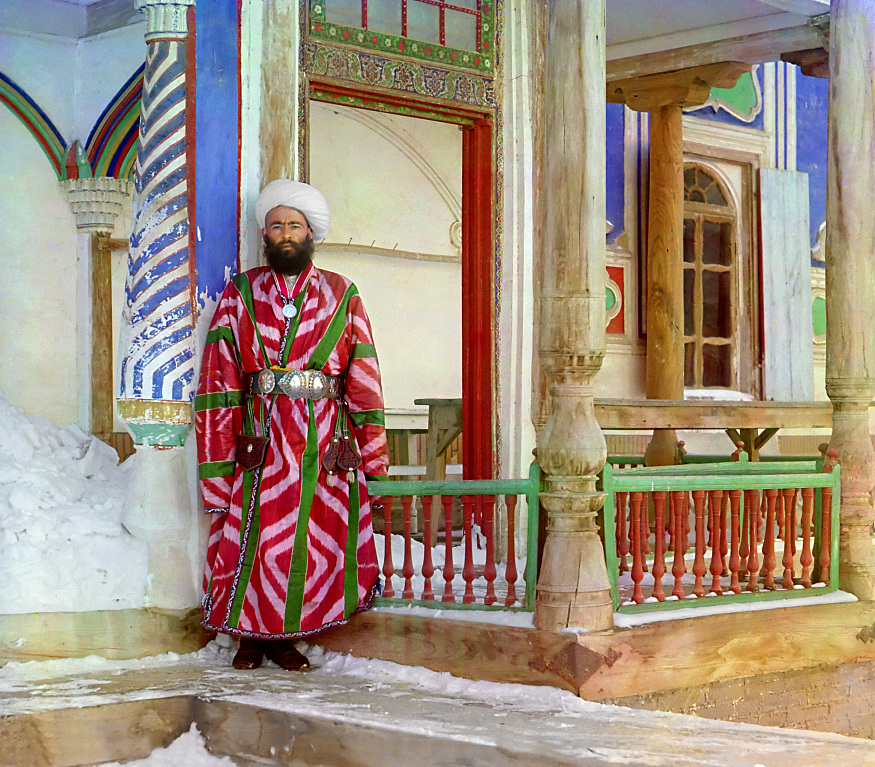 The World Society for the Study, Preservation, and Popularization of the Cultural Legacy of Uzbekistan was formed in 2017 in order to present the heritage of Uzbekistan in print and other media to the people of Uzbekistan and to a global audience. The Society’s ambitious goal is to publish the greatest examples of the art of Uzbekistan, wherever they are now located around the world, together with essays and commentary in order to make the totality of international scholarship on Uzbekistan’s heritage accessible to all. 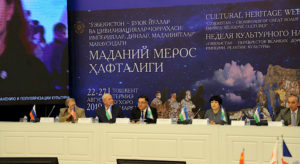 Meeting of the World Society for the Study, Preservation, and Popularization of the Cultural Legacy of Uzbekistan.

The objectives of the Society were elaborated at a series of international conferences in Tashkent, Paris, and St. Petersburg. An Academic Council to guide the project was formed of scientists, researchers, and specialists from Uzbekistan and around the world.

The primary goal of the Society is to educate the people of Uzbekistan, especially the younger generation, bringing home to them the extent and depth of their cultural heritage. The Society’s chosen method is to integrate world scholarship and world collections into Uzbekistan’s cultural and educational matrix. The group has not only invited  participation by international scholars to produce a comprehensive series of volumes on the history of the arts of the Uzbek region, drawing on worldwide collections and publishing them in Uzbek, English, and Russian. The Society is also creating multilingual films, databases and other documentary media to encourage the study and appreciation of Uzbekistan’s culture within Uzbekistan and abroad.

Within just a few years, the Society’s initiative has resulted in publication of thirty-five volumes and two dozen documentary films covering a wide variety of works from Uzbekistan in both private and museum collections. Each published hardcover volume is 500 pages or more and profusely illustrated. The books will not be sold but donated to schools, libraries, and other institutions in Uzbekistan and circulated to participating museums and universities around the world.

Each of the volumes published so far has been written by experts in the covered fields – covering textiles, manuscripts, miniatures, calligraphy, sculpture, ceramics, and metalwork from the various cultural periods in Uzbekistan. The artworks included range from the Bronze Age to Hellenistic, Buddhist, Sogdian, medieval Islamic, and Timurid masterpieces. Additional volumes cover the arts of the 19th century Khanates and early documentary and artistic photography in Uzbekistan.

A corollary to this project, already being undertaken by the government of Uzbekistan, is to modernize and expand the country’s museum infrastructure. This project is intended to bring greater exposure to art from around the world to the people of Uzbekistan by developing expertise in museology and encouraging cooperation and exchanges between global institutions and Uzbekistan’s museums.

The project’s director and chairperson is Firdavs Abdukhalikov, a well-known Uzbek media expert and recently named head of Uzbekkino, the official Uzbek film producer. Chairman Firdavs Abdukhalikov stated at the World Society’s September 2019 Washington, D.C. conference that the goal of the project is to honor the cultural heritage of Uzbekistan wherever it is now located and not to seek the return of objects from existing collections. He noted that many artworks left Uzbekistan long before, as objects of trade along the Silk Road, as luxury goods exported throughout the Islamic world, in gifts and exchanges to Russia and other neighboring states, and accompanying emigrants in the early Soviet period.

In fact, the World Society’s (and the Uzbekistan government’s) far-sighted approach of prioritizing  cooperation with foreign institutions and collectors is likely to be far more productive of international loans, gifts, and exchanges than policies demanding repatriation. American private collectors and museum representatives were invited to Tashkent for the August 2019 conference to see the Project’s achievements so far and to encourage them to join in the next phase of the project, which is to publish important materials from Uzbekistan in U.S. and Canadian collections.

Meetings in Uzbekistan Followed by an International Gathering in Washington, DC

The III International Congress of the World Society for the Study, Preservation and Popularization of Cultural Heritage of Uzbekistan, opened in Tashkent on August 22, 2019. The week-long conference brought together hundreds of Central Asian experts and researchers from forty-four countries, the directors of museums and libraries, international collectors of the art of Uzbekistan, and representatives of UNESCO and ICOMOS. 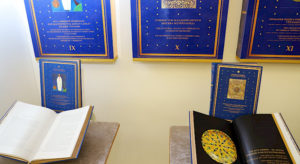 Publications of the Cultural Legacy of Uzbekistan in World Collections Project.

Dozens of events took place in August in different cities of Uzbekistan: a UNESCO conference on “Preservation of tangible and intangible cultural heritage: topical problems and strategies for their solution” was held in Samarkand, presentations and an exhibition on “Uzbekistan – crossroads of civilizations” were set in Termez, and exhibitions of Kushan Treasures of the Dalverzin Gold finds and Masterpieces of Uzbekistan’s Manuscripts were held in Tashkent. After days of academic activities, the World Society and Government of Uzbekistan sponsored dinners that provided many opportunities for visiting scholars to meet with Uzbek colleagues, along with a spectacular series of performances, musical, drama, and dancing entertainments.

Soon after, on September 27, 2019, a meeting was held in Washington, D.C., coinciding with the 28th anniversary of Uzbekistan’s independence. Chairman Firdavs Abdukhalikov spoke warmly to the attendees, welcoming museum representatives from the Smithsonian’s Freer-Sackler Museum, the Textile Museum, invited private collectors, and other representatives of institutions holding collections of art from Uzbekistan. He explained that the project’s goal in the U.S. was not only to document American and Canadian museum collections, but for the first time to include materials from important private collections, of which there are many in the U.S.

Among the U.S. private collections, which consist primarily of 19th century textiles, one or more volumes include works from the collections of Bruce Baganz, Marshall and Marilyn Wolf, Roger Pratt, David Reisbord, and Cheri Hunter. The project also reached out to Dr. Guido Goldman, a speaker at the Washington D.C. event, who has gifted his world-renowned collection of hundreds of early Central Asian ikats to twelve museums in the U.S. and U.K. Dr. Goldman spoke about how important it was to him to preserve the extraordinarily beautiful but fragile early ikat textiles of Uzbekistan and how publication and exhibitions of Central Asian ikats had subsequently stimulated a revival of traditional textile production in Uzbekistan and made Uzbekistan ikat patterns ubiquitous in international design.

Other presentations at the conference focused on scholarship as well as collections. Alexander Naymark gave tribute to the distinguished history of Central Asian studies in the U.S., highlighting the achievements of notable scholars including Richard N. Frye, among whose works was an annotated translation of the History of Bukhara by Narshakhi, and who encouraged a multi-ethnic view of Central Asian culture. Naymark also spoke about the contributions of scholars Denis Sinor and Peter Benjamin Golden, and touched briefly upon the outstanding contributions of Yuri Bregel and his many books and edited works, including on the writings of V.V. Barthold, the History of Khorezm, the history and ethnography of the Karakalpaks, and his massive bibliography on Islamic Central Asia, which included 32,000 individual entries.

Dr. Irina Bogoslovskaya, the project’s curator for North America, is an expert in the material culture of 19th century Uzbekistan. She discussed her preliminary contacts with other American and Canadian museums with Uzbekistan art collections, among them, Doris Duke’s Shangri-La in Honolulu, the Metropolitan Museum in New York, and Los Angeles County Museum of Art. The project also plans to include the extraordinary photographs of the Library of Congress’ Prints and Photographs Collections.

The Cultural Legacy of Uzbekistan in World Collections Project is truly unique, not only in its scale but also in its enthusiasm for the global circulation of Uzbekistan’s rich cultural heritage. The project, together with the Uzbekistan’s government’s support for publishing and promoting existing Western collections, is a major step forward in cultural property policy. The project will undoubtedly contribute to encouraging institutional development in Uzbekistan, tourism, and positive international relations. It is likely that Uzbekistan will find tremendous advantage for its own cultural institutions and for its own public’s interest by welcoming international participation in the scholarly dialog – the pursuit of knowledge irrespective of borders – rather than insisting, as some nations have done, on both a narrow, nationalist perspective on scholarship and blanket demands for the return of objects.

The Cultural Legacy Project has already proven to be a highly effective means of bringing Uzbekistan’s culture to the widest possible academic audience. This extraordinary project is not simply about conferences and books and videos. It recognizes that the creative energies of the people of Uzbekistan should be shared widely among a global audience, that Uzbekistan has much to teach the rest of the world, and that Uzbekistan benefits by embracing a global perspective on culture.