A Brilliant New Museum Also Faces Claims of Past Abuse 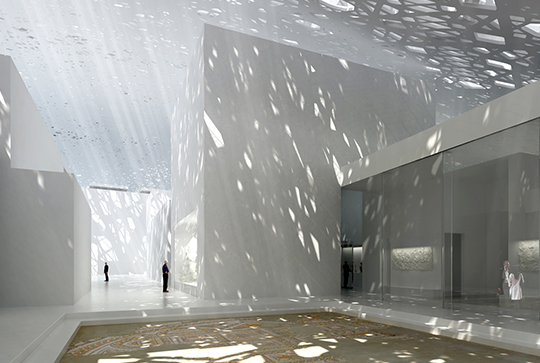 The Louvre Abu Dhabi (LAD) opened on November 11, 2017 with three days of celebration. Tickets sold out for the opening day, LAD honored educators with workshops and LAD resources for their classrooms, Malian singer, dancer, musician and actress Fatoumata Diawara and French-Lebanese world musician Ibrahim Maalouf performed at the opening of the first “universal museum in the Arab world.”  With an emphasis on bringing the world’s culture to the United Arab Emirates (UAE),  the Louvre Abu Dhabi is the first of five museums planned for Saadiyat Island’s cultural district to be completed.

The concept of the Louvre Abu Dhabi began with an intergovernmental agreement between France and the United Arab Emirates (UAE). The agreement involved the use of the Louvre brand, French art and museum development expertise, and the rental of numerous works of art over a thirty year period in exchange for nearly $1.3 billion dollars. The funds are earmarked for the restoration and revitalization of French museums.

An organization composed of 13 French museums called the Agence France-Museums was created to provide expertise in museum planning, collection development, scientific and cultural program planning, and in coordinating the art loans and temporary exhibitions of the Louvre Abu Dhabi. Its members include:

French architect Jean Nouvel designed the 1,044,108 square foot, medina inspired, one billion dollar structure. The hallmark feature of the museum is a 7,000 ton steel dome comprised of eight layers of geometric complexity that allows light to filter through into the space below. The “rain of light” effect created by sunlight streaming through the lace-like dome was inspired by the effect of light shining through palm leaves, the traditional roofing material in the UAE. The dome’s eight layers are comprised of a geometric star-like design that is repeated in various sizes and at different angles.

Twenty galleries, forming twelve chapters, tell the story – through six hundred works of art – of the world’s “universal narrative” seen “in a new light.” According to the LAD’s   media alerts, “Each chapter focuses on shared themes and ideas that reveal common connections throughout humanity.” Art and sculpture are arranged according to these themes rather than in geographic region or place in history.

The museum also includes special exhibition spaces for temporary exhibits, a Children’s Museum, a 270-seat auditorium, restaurants, and retail space. Additionally it houses a research centre for study of the collection.

In an article by Katarina Premfors, in the New York Times, “Mr. Nusseibeh, the state minister, said his government considers the Louvre Abu Dhabi part of a cultural strategy to counter tensions in the region.” Part of the UAEs’ move toward the use of political ‘soft power’,  “the Emirates’ ultimate aim is to promote the capital as a tolerant global city, and its flagship museum as a bridge between civilizations.”

‘“The priority is to invest heavily in education and culture,” he said, speaking at his art-filled country home outside Abu Dhabi. “This has become more important because of what happened with the radicalization of groups that have kidnapped Islam” for their own political purposes. “It is against everything that this country stands for,” he added.”

Complementing the Louvre Abu Dhabi on Saadiyat Island, the UAE has also contracted for construction of the Guggenheim Abu Dhabi, utilizing worldwide Guggenheim collections to fill a building designed by Frank Gehry, and the Shaikh Zayed National Museum designed by Lord Norman Foster, honoring the founding leader of the UAE, Shaikh Zayed, a strong proponent of public education, full literacy, and women’s rights, who skilled negotiation brought the UAE into existence after Britain announced its withdrawal from the Trucial States in 1968. A ten-year contract signed with the British Museum in 2009 would have brought loans and curatorial expertise from that institution, but it is likely to expire before any loans can be made.

The dark side of the brilliantly lit Louvre Abu Dhabi appears in the allegations of worker-abuses that have plagued the construction of the museum since the beginning. Human Rights Watch has noted substandard living conditions, unsafe construction practices resulting in injury and – in some cases – deaths. While the museums are not directly responsible, UAE labor contractors are widely accused of abuses such as confiscation of passports and withholding of wages. This issue has arisen repeatedly in the Saadiyat projects, a more internationally visible locale that has drawn considerable press attention.

Behind the accusations lies a long-standing sponsorship system called “Kafala,” used to monitor foreign workers in many Arab countries. Under the Kafala system, an employer sponsors the worker and is also responsible for their visa and legal status. The system has led to systemic exploitation of workers, with little possibility for legal recourse. The population of the UAE is composed approximately of 90% foreign workers, from well-paid international business executives to white collar service providers and at the bottom, laborers from Pakistan, Indonesia and other Muslim nations.

Partly in response to international outrage over the plight of the workers on Saadiyat Island, the United Arab Emirates began reforms to Kafala in 2011. Additional reforms went into effect at the beginning of 2016, allowing workers to leave their jobs before their contract expired. It is unclear how much the work environment has changed since the passage of these laws.  Two Swiss journalists were detained, questioned, and had their equipment confiscated in early November 2017 after attempting to film the working conditions of the immigrant workers on Saadiyat Island. Human Rights Watch has been banned from the Island since 2014.