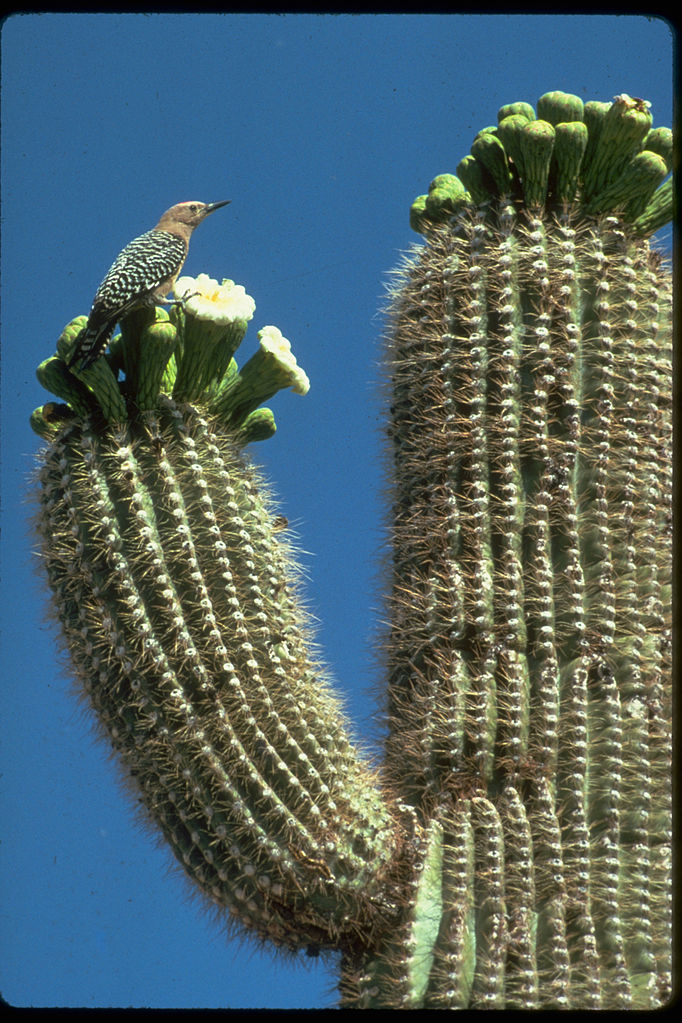 Burial, cultural, and sacred sites of the Tohono Oʼodham Nation have been destroyed in a race to complete hundreds of miles of border wall to block illegal immigration from Mexico into the U.S. The current administration has bypassed multiple federal environmental and cultural protection laws under section 102 of the 2005 Real ID Act, which grants the Department of Homeland Security (DHS) the authority to waive existing laws to erect border barriers. Not only are large areas of the 330,000 acres wilderness biosphere reserve of the Organ Pipe Cactus National Monument simply flattened for construction; sacred sites have already been blasted in construction in February in Native American reservation lands.

Culture and the environment at risk 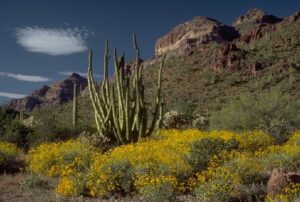 Numerous cultural sites significant to the O’odham peoples lie in the path of border wall construction in Arizona. There was widespread public outrage when the Department of Homeland Security (DHS) used controlled blasting to clear a path for the border wall at Monument Hill, a sacred site to the Hia-C’ed O’odham and burial ground of Apache warriors killed in scrimmages with the O’odham.

Quitobaquito spring is also affected. The spring is a rare desert aquifer, sacred site to the O’odham peoples as part of their annual salt pilgrimage, and shows archeological evidence of human use going back thousands of years. Water use for mixing massive amounts of concrete for the proposed wall already threaten the water table there, which in turn threatens the spring.

Other sites that will be negatively impacted include an area called Las Playas, which contains ceremonial grounds documented by oral history and archeologists as sacred to the Hia-C’ed Oʼodham. Four miles west of there, in the Cabeza Prieta wildlife refuge, is a sacred burial ground that lies directly in the path of construction.

The House Subcommittee on Indigenous Peoples of the United States heard testimony on the impact of border wall construction on the Tohono O’odham Nation on February 26, 2020 in an oversight hearing entitled, “Destroying Sacred Sites and Erasing Tribal Culture: The Trump Administration’s Construction of the Border Wall.”[1]

Ned Norris, Jr., Chairman, of the Tohono O’odham Nation, testified. He choked back tears when asked about the effect that the blasting at Monument Hill and other sacred sites had on his people, “It’s hard to see the blasting that you showed on the video today. Because I know in my heart and from what our elders have told us and what we have learned that that area is home to our ancestors. Blasting and doing what we saw today has totally disturbed, totally forever damaged our people.”

Republican leadership characterized the construction of the wall as protecting sacred sites, cultural resources, and the environment from the negative impact of trash and vehicles left by immigrants and drug cartels crossing the border.

Ms. Haaland replied, “A sacred site, that’s been blasted. It can never be made whole again. I want you to understand that. … [The ancestors] put these things there for a purpose. Because they knew that in the future, we would rely on that knowledge and knowing that those ancestors are there. I don’t expect you to understand this, but I’m hoping to impart a little knowledge to you so that you can understand how they feel about this. Why they cry when they see that place being blasted apart. You can’t equate that with trash. The damage that this administration is doing to this area is irreparable. And you didn’t even ask.” 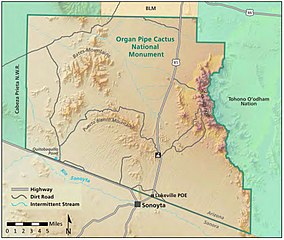 Democratic leadership highlighted the lack of tribal consultation in the construction of the border wall as required by the United States’ legal trust responsibilities to Indian tribes. Republican leadership responded that all requirements had been waived under section 102 of the Real ID Act.

The Tohono O’odham ancestral lands include Organ Pipe Cactus National Monument (ORPI), established on April 13, 1937 by Franklin D. Roosevelt through Presidential Proclamation 2232. The monument was designated an UNESCO International Biosphere Reserve in 1976 as “a pristine example of an intact Sonoran Desert ecosystem.” Environmental and conservation groups, and scientists have grave concerns that the border wall will “harm wildlife populations by eliminating, degrading, and fragmenting habitats” along the US/Mexico border.

Historically, the O’odham lands extend just north of Phoenix, Arizona, South to Sonora, Mexico, west to the Gulf of California, and east to the San Pedro River. With Mexican independence, the Gadsden Purchase between Mexico and the United States, and multiple iterations of the reservation system, O’odham traditional lands have been drastically reduced and divided. Currently about 2,000 members of the tribe live in Mexico and 34,000 live in the United States.

Although an international border has divided their land since the mid-19th century, the O’odham from the U.S. and Mexico gather for community celebrations and rituals, maintaining traditional connections to their land. With increased border security since the early 2000s the Tohono O’odham tribe has struggled to maintain this relationship.[2] 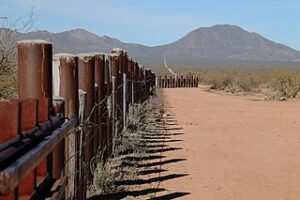 The O’odham are quick to point out that they already work to protect the border in cooperation with U.S. Immigration and Customs Enforcement, the Federal Bureau of Investigation and the Border Patrol. This has been especially true since the 1990s with the increase in Mexican drug cartels traffic across the border. According to Anya Montiel in The Tohono O’odham and the Border Wall of American Indian,[3] “along with providing tribal funds for border protection, the Nation added vehicle barriers.” The barrier was constructed in such a way that animals could migrate freely and tribal members could pass through at secure checkpoints to visit their lands and people on either side of the border.

In the United States, the Tohono O’odham Nation is the government body of the Tohono O’odham tribe. They have opposed the 30 ft. high border wall since it was first proposed, stating that the wall would destroy sacred sites and burials important to tribal nations and further reduce access to tribal lands.

The Tohono O’odham Nation is not completely opposed to increased security and surveillance, however. In March 2019 the tribe’s legislative council voted unanimously to allow the installation of 10 integrated fixed towers (IFT) equipped with radar and night vision cameras for Border Patrol to increase its efficacy. The decision was controversial as many in the tribe felt that surveillance towers would challenge local tribal sovereignty and agency.

All federal agencies are subject to the Native American Graves Protection and Repatriation Act (NAGPRA). A major purpose of the statute is to provide greater protection of Native American burial sites and control over the removal of cultural items.

NAGPRA requires consultation with Indian tribes whenever archeological investigations are expected to encounter cultural items or when they are unexpectedly discovered. Removal of any of these items also must be done under procedures required by the Archeological Resources Protection Act. For example, the National Park Service states that federal agencies and tribes need to undertake careful consultation with traditional users of the land and to protect Native American graves, whether marked or unmarked.

A report published in July 2019 by the National Park Service identified 22 Native American archeological sites along the Organ Pipe National Monument, within the 60ft wide Roosevelt Reservation, that were directly threatened by the development of the border wall.

[2] For a video of the impact the border wall will have on O’odham cultural lifeways go to this link: https://www.sandersinstitute.com/blog/tohono-oodham-nation-opposes-border-wall