Home > Global Art > The Careful Collector: Great Catsby is Life of the Party

The Careful Collector: Great Catsby is Life of the Party 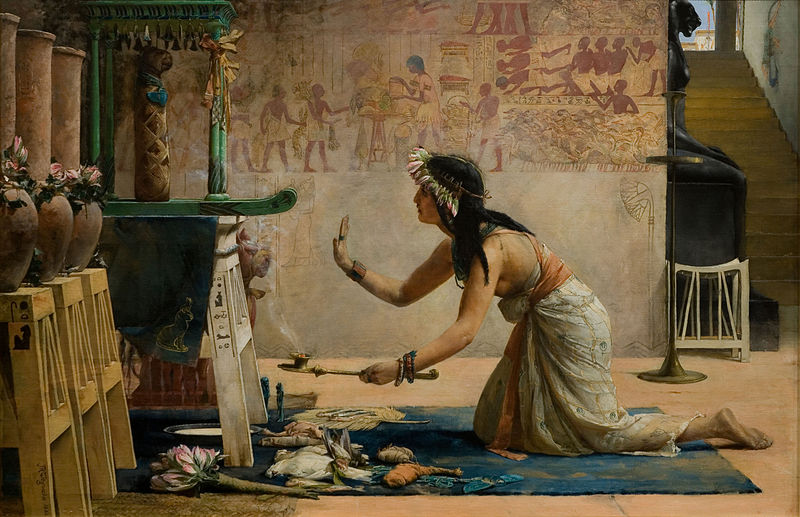 John Reinhard Weguelin: The Obsequies of an Egyptian Cat, oil on canvas, 1886, Collection Auckland Art Gallery, Google Arts and Culture, Wikimedia Commons. A priestess offers gifts of food and milk to the spirit of a cat. On an altar stands the mummy of the deceased, and the tomb is decorated with frescoes, urns of fresh flowers, lotus blossoms, and statuettes. The priestess kneels as she wafts incense smoke toward the altar. In the background, a statue of Sekhmet or Bastet guards the entrance to the tomb. 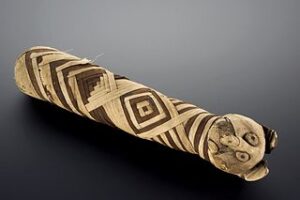 Reed thought his uncle Wilson’s “pet” mummified cat, a.k.a. “The Great Catsby,” never looked so good.  Reed’s first memory of his uncle’s cat was an early one.  Reed must have been all of twelve years old circa 1977, when he first visited his uncle’s hip antiquarian bookstore in New York City’s East Village.  The store had its own “cabinet of curiosities,” featuring “the Great Catsby.”  Reed’s uncle told him at the time that the cat was worshiped as a god in Egypt and had been mummified and covered with linen bandages just like the Pharoah.  Now, years later, Reed was enjoying a glass of champagne while admiring the cat in a beautifully appointed display case at a major museum near his hometown.  The Great Catsby was a highlight in a new exhibit entitled, “Crazy about Cats:  Felines and their Fanciers from Ancient to Modern Times.”  As thanks for his generous loan, Reed had been invited to a reception for the museum’s major donors that marked the show’s opening.

Reed thought that his uncle would be incredibly happy that the Great Catsby was displayed so prominently. Although Reed had some initial reservations about lending out his prized mummified cat to the museum, the entire process was a painless one.  Reed was initially contacted by a curator who had read an article in a prominent New York City newspaper.  That article quoted Reed in a nostalgic story about the now long closed antiquarian bookstore and its famous “pet cat.”

The cat was quite a “celebrity” whose presence loomed over literary readings that took place in the store on Thursday evenings from the late 1950s through the early 1980s.  Over the years, Reed’s uncle put together quite a collection of pictures of famous authors and poets posing next to the Great Catsby before each reading started.  Reed inherited these photos from his uncle along with the famous cat. 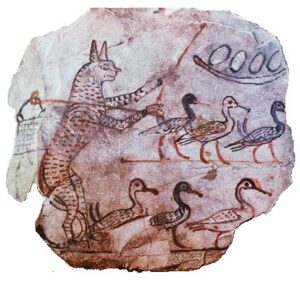 Drawing on limestone of a scene from a fable, Ancient Egyptian, 19th dynasty, c 1120 BCE. A cat with a shepherd’s crook and a bag over his shoulder guards six geese and a nest of eggs. The Egyptian Museum, Cairo. Wikimedia Commons.

The loan process began when the curator visited Reed at his home to examine the cat mummy.  The curator convinced Reed to lend the cat for the exhibit, telling him that it would be seen by hundreds of thousands of people during the exhibit’s six month run.

The curator also explained more about Reed’s mummified cat. Historical reality did not fully match what Uncle Wilson had told him.  Cats were indeed honored in Egypt.  After all, they helped control rodents that would otherwise decimate grain stores.  Moreover, Egyptians kept cats as pets, and they were so fond of them that they were sometimes mummified so they could accompany their owners into the afterlife.  However, the sad truth also was that many more cats were raised only so they could serve as sacrificial offerings, chiefly to the cat goddess, Bastet, who was associated with fertility and domesticity.  As part of the process, the cats were first strangled, and then mummified and wrapped in linen bandages before being deposited as offerings at temples and shrines.

Cat mummies were so common in Egypt that in the 1880s, after a farmer found a cache of 300,000, only the best were saved for collectors, while the rest were shipped off to England where they were ground up for use as fertilizer.  Based on his knowledge of the mummy trade, the curator thought it likely that Reed’s cat came to the United States as a curiosity sometime in the early 20th century, perhaps by way of Europe.

Cat mummies are still found in quantity in Egypt today, but U.S. museums consider their status under U.S. and Egyptian law as well as museum self-regulations before exhibiting them or accepting antiquities as gifts.  Egypt allowed exports of antiquities until 1983 but Egyptian permits rarely identify specific objects. Since 2016, the U.S. has strictly regulated imports of Egyptian antiquities and many U.S. museums will not exhibit or accept antiquities as gifts unless they have been outside their country of origin since 1970. 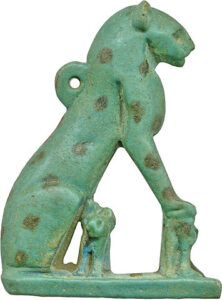 Cat with Kittens, faience, between 664 and 332 BC (Late Period), Walters Art Museum , Baltimore MD, USA, number 48.1559, Acquired by Henry Walters, 1930. The mother cat has four kittens, demonstrating her fertility. The loop on the back suggests that this amulet could be worn as a pendant.

Once Reed agreed to the loan, the process itself was rather straightforward.  First, Reed signed a loan agreement that memorialized the conditions and duration for the loan.  Reed warranted that he had good title, supported by a photo of him as child with the mummy.  In return, the museum promised to insure the Great Catsby and provide for safe and secure transportation, storage and display.  The agreement also gave the museum reproduction rights for images of the cat mummy taken while it was in the museum’s care as well as some of Reed’s vintage photos of famous authors and poets taken in his uncle’s store.

On an appointed day, professional movers came to pack up and transport the cat mummy to the museum.  Reed was impressed with their ability to pack the Great Catsby so securely in a fitted box before they took him away in a black unmarked van.

Later on, Reed gave approval for the mummy to receive both an X-Ray and CT scan. The curator joked that the “Cat Scan” proved that the Great Catsby was indeed authentic.  This is not always the case.  Sometimes, unscrupulous Egyptian priests short on cats created fake mummies or at other times, pilgrims too poor to purchase the real thing had to make do with crude replicas.  Here, however, the fine linen wrappings, complete with an accurate rendition of a cat’s head at the top of the mummy suggested that the Great Catsby was indeed a feline even before the X-Ray and CT Scan confirmed it.

Detailed information about mummified cats, X-Ray and CT Scans as well as blown up images of famous authors and poets posing beside the Great Catsby accompanied the display.  Reed smiled as he took in all that information and thought back to his visits to his uncle’s store so many years ago.

Next month:  Is it too good to be true?

Fertilizing Crops with Ancient Cat Mummies, Ripley’s Believe It or Not! (October 28, 2019)

Department of the Interior Guidance for Incoming Loans of Museum Collections (July 2017).