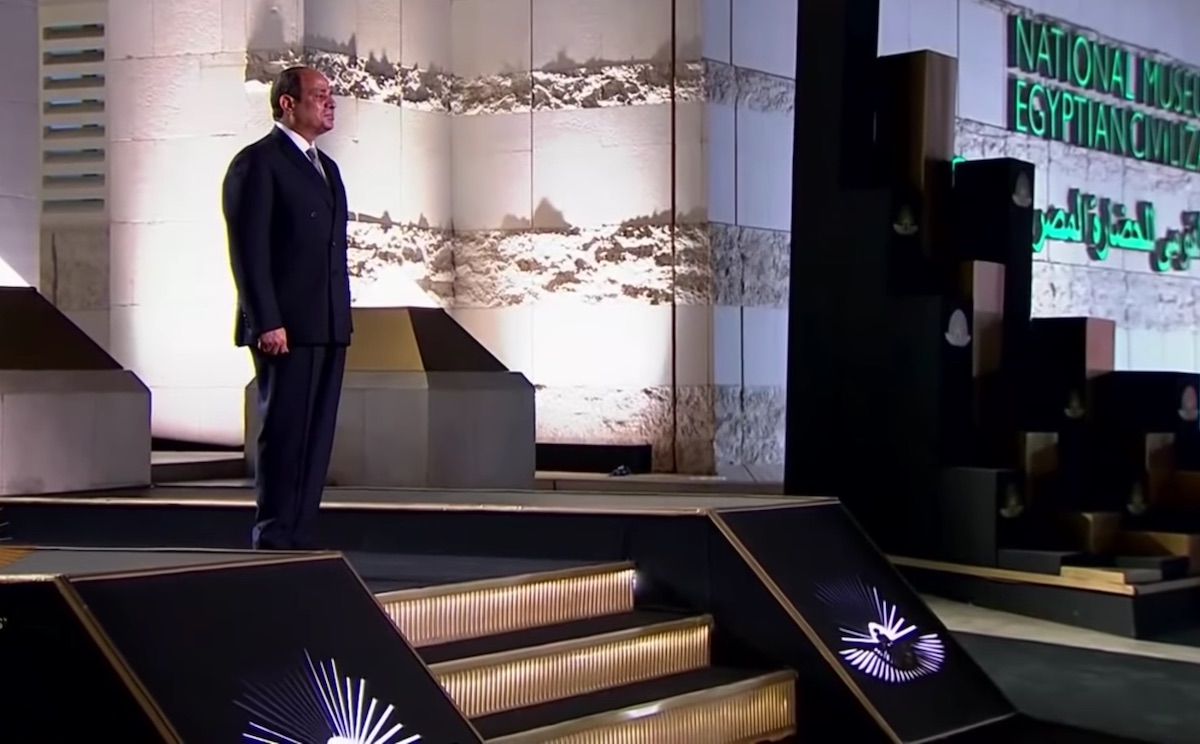 Pharaohs Golden Parade, April 3, 2021. President Abdel Fatah al-Sissi stands alone on a dais as the Pharaohs are paraded before him on arrival at the new National Museum of Egyptian Civilization. CYC.

The Pharaohs Golden Parade, April 3, 2021. Obelisk in Tahrir Square, All screenshots from CYC.

In a dramatic, made-for-international television spectacle headlined as ‘Pharaohs’ Golden Parade’ on April 3, 2021, a parade of ancient mummies travelled from the old Egyptian Museum in downtown Cairo to the new National Museum of Egyptian Civilization. The parade brought the mummies of Pharaohs from Seqenenre Taa II (1650 BC), to Ramses IX, (1200 BCE) (died 1111 BCE) to their new museum home.

Each mummy was encased in a nitrogen-filled box and enclosed within a massive vehicle decorated with winged patterns in purple and gold and inscribed with each pharaohs or queens’ name. The transports set off from the old Egyptian Museum, first passing in a circle around Tahrir Square’s  newly-installed ancient obelisk from the San Al-Hagr archaeological site in Zagazig. The 19m tall obelisk was moved in eight gigantic blocks, restored and re-erected in the center of the square last fall. Four granite sphinxes were moved from the Karnak Temple complex in Luxor, a UNESCO world heritage site south of Cairo, and set in place around the obelisk.

(A new inscription at the base of the obelisk refers to the Egyptian people’s “freedom and steadfastness” achieved by the “June 30th [2013] revolution,” a military crackdown during which at least 1000 people were killed, ending the Mohammed Morsi government and crushing the Muslim Brotherhood. The election of Abdel Fatah al-Sisi as President followed, establishing a military-dominated, autocratic regime that is highly intolerant of dissent and under which Egyptian security services have “detained and tortured perceived political opponents by the thousands.”) 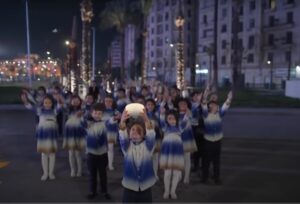 Children bringing lights to the obelisk.

After circling the obelisk, where women with filmy, winged costumes saluted the passing Pharaohs with raised arms, the caravan was escorted through five kilometers of Cairo streets that had been newly-paved to ensure a smooth ride. The mummy-transports were accompanied at start and finish by hundreds of costumed extras and replica horse drawn chariots.

During the Pharaohs’ Golden Parade, a room of government officials, with Sisi front and center, were seen watching it on a screen set behind an orchestra and chorus. The parade included a televised symphonic performance of a composition by Egyptian Hesham Nazeh that added folk musical instruments to traditional orchestration. The musical work included extracts from the Book of the Dead, hymns dedicated to Isis, and Pyramid texts sung in ancient Egyptian. 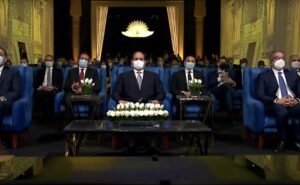 Sisi views the orchestra and chorus.

At its close, Sisi was shown walking alone through long corridors lit with winged emblems and displays celebrating the parade, finally taking his place at a brilliantly lit entrance, flanked by small, glowing pyramids. Thus, on arrival at the new Museum of Egyptian Civilization, the transports were greeted, not by museum or cultural officials, or even prominent members of the government or military, but by President Abdel Fatah al-Sisi, stiff, unmoving and standing alone on this dais. The setting was the culmination of an unambiguous narrative – that the long-deceased rulers, and all Egypt, came before him to acknowledge his role as absolute ruler, his rightful succession and taking of the throne.

The ceremony was clearly intended to reinforce an underlying message of Egypt’s – and Sisi’s – obsession with Pharaonic Egypt. Prior to the event, Sisi tweeted: “This grandiose spectacle is further proof of the greatness … of a unique civilization that extends into the depths of history.” The ceremony did not fail to include modern emblems of statehood connecting the Pharaonic kings to the current Egyptian government. Members of the Egyptian military in full uniform lined the route on horse and on foot and the mummies were greeted by a 21-gun salute from Egypt’s Republican Guard.

For Sisi, appropriating Pharaonic tropes is more than just publicity for Egypt’s attempt to woo back international tourists put off by perceived insecurity and the violent suppression of journalists, Tik-Toking teenagers, and anyone who questions Sisi’s rule. It is an appropriation that justifies his dictatorial rule. Abuses of human rights, religious rights, and political freedom can the more easily be camouflaged beneath spectacles celebrating autocracy, and after all, everyone loves a parade. 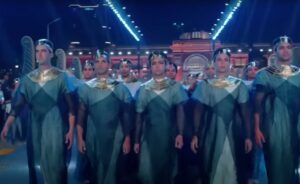 Not that Cairo’s residents were allowed to take part in the multimillion-dollar extravaganza. The spectacle was explicitly directed to an international television audience. Banners and barricades were erected to obscure the view of Cairo’s poorer neighborhoods as the parade passed through them. Unlike a real parade, Egyptian citizens were blocked from attending and told to watch it on TV at home.

Also striking in the celebration was the absence of any reference to aspects of Egyptian history or culture other than the Pharaonic (or pseudo-Pharaonic). For many of Egypt’s citizens, it may be fun to watch a Cecil B. DeMille-style video touting the country’s ancient greatness but offensive or even alarming to see the explicit embrace of ancient religious tropes by a modern leader.

Sisi’s fascination with Pharaonic kingship stands in stark contrast to the more distant regard of former President Anwar el-Sadat. In March 1981, then President Sadat ordered the Royal Mummy Room at the Egyptian Museum to be closed and discussions began about whether the mummies should be reburied or a special museum designed to respectfully hold them – but not to display them. At the time, prominent Egyptian architect, writer and member of UNESCO’s International Committee of Museums Kamal el-Mallakh told the NY Times that a new museum at Luxor could be built to hold them, but, “It should not be a zoo where for a dollar you see the monkey.” After Sadat’s assassination that same year, museum officials returned the mummies to public display, but more professionally shown.

The National Museum of Egyptian Civilization, which has been under construction since 2002, has been open on a partial basis since February 2020. President Sisi officially inaugurated the museum on April 3, 2021. So far, its displays hold 1500 artifacts. The museum is also intended to cover Greco-Roman, Coptic, Medieval, Islamic, modern and contemporary Egyptian society. It remains to be seen whether any of these gets equal screen-time. 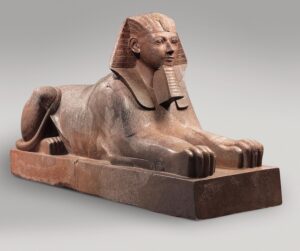 Sphinx of Hatepshut, one of at least six granite sphinxes that stood in Hatshepsut’s mortuary temple at Deir el-Bahri. Metropolitan Museum of Art, New York.

A member of Egypt’s House of Representatives recently submitted a bill, “Registration and Exploitation of Egyptian Antiquities at Home and Abroad,” in order to enable the Government of Egypt to register “all Egyptian antiquities” at WIPO, the World Intellectual Property Organization.  MP Ayman Mohaseb asserted that since some forty museums around the world hold nearly a million artifacts, Egypt would receive more than $500 billion in revenue if it registered all antiquities so that no museum could exhibit them without paying a fee to Egypt. Mr. Mohaseb said he would soon meet with Antiquities and Tourism Minister Khaled al-Anani to present the new bill.

However, modern copyright and trademark laws are not only time and treatment-limited, they do not apply to ancient or antique visual representations predating their passage. Egypt’s first codified artistic and literary copyright law was enacted as Law 354 of 1954. 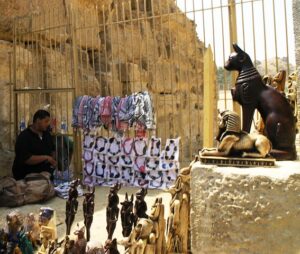 Demands from the Government of Egypt to trademark or copyright Egyptian heritage are nothing new. In 2007, archaeologist Zahi Hawass proposed enacting a law to apply worldwide to full-scale replicas of any object in any museum in Egypt that would also control the commercial use of ancient monuments replicating the pyramids or sphinx. In 2016, Egyptian cultural authorities demanded a halt to building monumental copies of the Sphinx and pyramids in China at the Lanzhou Silk Road Cultural Relics Park (also featuring a Parthenon). Chinese authorities actually agreed to dismantle a gigantic sphinx used as a movie location in Shijiazhuang, Hebei province after Egyptian cultural heritage authorities raised complaints with UNESCO that it was tarnishing Egypt’s brand and potentially hurting tourism, but it was apparently recreated in 2018, bigger and better, as part of a cultural industry zone – with plenty of room in its hollow insides for offices and movie sets.

Egypt Today reported that on his first visit to Cairo, Hideki Matsunaga, the Japanese International Cooperation Agency’s director for the Middle East and Europe, noted the importance of funding for tourism development in the strategic cooperation between Egypt and Japan. Three-quarters of the more than $1 billion cost of the Grand Egyptian Museum is funded through loans from Japan. Japan has also provided training and expertise to Antiquities Ministry workers and employees at the Grand Egyptian museum. Japan’s overall $2.7 billion development package for Egypt is largely directed to government projects involving electricity, transportation, and irrigation development. It also contains a hefty commitment of $450 million for tourism and antiquities protection. Matsunaga also expressed satisfaction at the global attention to the promotional parade transporting the sarcophagi of 22 ancient pharaohs and queens to the new National Museum of Egyptian Civilization. 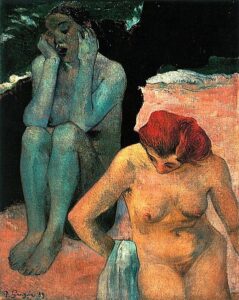 Another museum, the Mohammad Mahmoud Khalil Museum in Cairo’s Giza district was reopened April 4th after ten years in refurbishment. The museum reflects the eclectic and sometimes advanced tastes of prominent Cairene Mohamed Mahmoud Khalil (1877-1953). Khalil traveled to Paris to study law at the Sorbonne in 1897. There he met and married Emilienne Luce, who encouraged his interest in the arts. On his return to Cairo, Khalil became a prominent politician, serving as agriculture minister and speaker of the Egyptian senate. He also helped to found the Society of Fine Arts Lovers and Egypt’s Fine Arts Faculty, the first Western-oriented arts college in Cairo.

Khalil was one of the first persons outside of Europe to acquire a major collection of 17th – early 20th century French and Impressionist art. He left his collection of more than 100 artworks and his beautiful four-story home overlooking the Nile to his wife, who gifted all to the Egyptian state on her death. The collection includes works by Ingres, Courbet, Delacroix, Monet, Pissarro, Gaugin, Degas, Ingres, Sisley, Renoir, Rodin and Toulouse-Lautrec – and a single Van Gogh, Vase with Flowers, which unfortunately was stolen for the second time from the museum in 2010 – and has still not been recovered. The museum’s security system was modernized during the refurbishment.