Setback for Planned Mega-Resort and Amusement Park at Angkor Wat

A win for Angkor Wat’s tangible and intangible cultural heritage, at least for the time being. 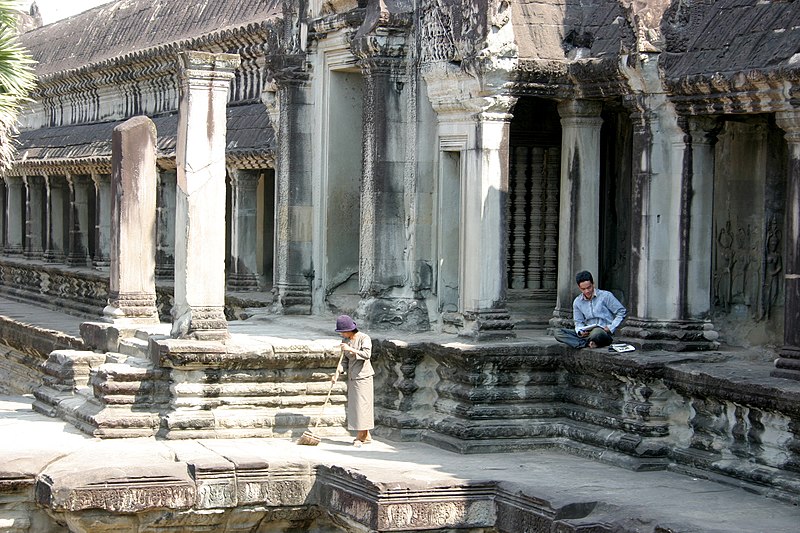 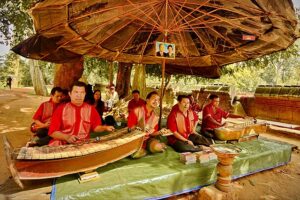 In what many observers saw as a surprise move, Cambodia’s Ministry of Culture and Fine Arts rejected a proposal in March 2021 by gaming, hotel and entertainment company NagaCorp to build a mega-resort and amusement park a mere 1,650 feet from the protected zone surrounding Angkor. The Cambodian government had granted a 50-year lease on the land to NagaCorp on May 12, 2020.

“one of the world’s most profitable gaming companies, and the largest gaming entertainment company in the Mekong Region. Its wholly-owned subsidiary NagaWorld owns, manages and operates Phnom Penh’s only integrated hotel-casino entertainment complex, which owns a casino license with a 70-year tenure (until 2065) and a 51-year monopoly within a 200 km radius of Phnom Penh (until 2045).”

Some of the key elements in NagaCorp’s proposal for the “Angkor Lake of Wonder” integrated resort were multiple luxury hotels; a water park dubbed “Naga Water World”; “Seam Reap China Town” – “A shopping and entertainment district where visitors can explore the Khmer culture through art, craft, food, entertainment and technology;” an indoor hi-tech digital theme park featuring digital experiences that would “take visitors on a journey of Khmer history and culture, and inspire the future of Cambodia;” an “ecological” tropical paradise element complete with a  pool, spa, and wellness center showcasing the local architecture and culture; themed cultural botanical gardens; and a re-creation of ancient Angkor’s canal system. 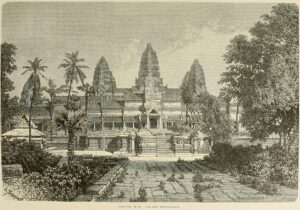 Although NagaCorp presents the resort as a way “to promote Angkor Wat and NagaWorld developments as the twin tourism icons of Cambodia,” the plan conflicts with the preservational goals Cambodia and the international community have set and the work accomplished over thirty years in Angkor. According to the World Monuments Fund, “since the fall of the Khmer Rouge, Angkor has been a great focal point of the rebuilding efforts in Cambodia.”

It’s difficult to think of Cambodia without bringing to mind the iconic ogival, saw-toothed lotus bud shaped towers of Angkor Wat. Aspects of the temple appear on the country’s flag and some of its currency. Though no other complexes are as large, Angkor Wat is one of numerous temples and historical structures in the 154 sq. mi Angkor Archaeological Park that holds other remnants of the Khmer Empire’s different capitals that existed from the 9th to the 15th century.

The various structures within the park draw on Hindu and later Buddhist cosmology, reflecting the beliefs of the rulers who commissioned them and the changing beliefs of later rulers. Angkor Wat for instance, was originally a Hindu temple dedicated to Vishnu, then later a Mahayana Buddhist temple. Now it is a place of worship for Theravada Buddhists. 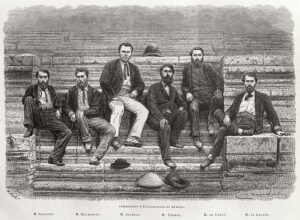 The capitals of the Khmer Empire and the Angkor region were largely abandoned in the 1400s, though Angkor Wat continued to be a pilgrimage site well into the 17th century by Buddhists from as far away as Japan. Without a large population to maintain the temples and community of Angkor, the jungle gradually engulfed the structures. Restoration and reclamation work began in the late 19th century but was interrupted by the onset of the Cambodian civil war in 1970. The work at Angkor was primarily performed under the direction of the École française d’Extrême-Orient (EFEO).

An International and National Effort

In 1989 the World Monuments Fund (WMF) sent a team to Cambodia to assess the damage that Angkor sustained during 20 years of civil strife. To the team’s surprise, while many Cambodian temple sites had been looted, destroyed or used for target practice by the Khmer Rouge government, the structures at Angkor had escaped the war relatively unscathed, although the jungle had once again begun to encroach on the buildings. Sadly, WMF noted, “Angkor’s caretakers were not so fortunate, as most, along with many other educated Cambodians, died under the Khmer Rouge.”

Three years later, on December 14, 1992, during the World Heritage Committee meeting, held in Santa Fe, New Mexico, USA, Angkor was inscribed simultaneously on the UNESCO World Heritage List and on the List of World Heritage in Danger (later removed in 2004). One of the conditions of the site’s inscription was the establishment of the International Coordinating Committee for the Safeguarding and Development   of   the   Historic   Site   of   Angkor   (ICC-Angkor).  ICC-Angkor was launched at an Intergovernmental Conference in Tokyo, Japan in 1993. The Committee is co-chaired by France and Japan. It meets twice a year to examine, discuss, and approve policy, development, and conservation efforts within Angkor and in the Siem Reap-Angkor region. 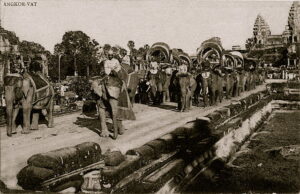 Procession of figures, Angkor-Wat in an antique postcard, circa 1900, Wikimedia Commons, public domain.

Another condition for World Heritage List inclusion was the formation of the Authority for the Protection and Safeguarding of Angkor and the Region of Angkor (APSARA). Adopted in Cambodia on February 19, 1995 through Royal Decree, APSARA is tasked with:

– Tourism management and dialogue with the communities living among traditional villages in the site;

– Research to enhance the cultural values of the site and its region, especially the cultural heritage of Siem Reap town;

– Protection and conservation of forests within and around the site;

APSARA is the largest employer in the region and functions under the auspices of the Ministry of Culture and Fine Arts. 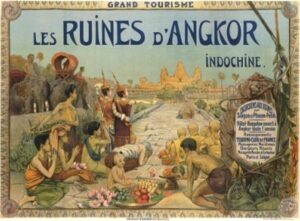 Since Angkor’s cultural protection policy framework was initially developed in the 1990s, other regulatory and policy advisory structures have evolved.  Two of the most significant efforts, the Angkor Charter and the Angkor Heritage Management Framework, were founded to support APSARA in its mission.

The working group[i] of the Angkor Charter met for over a decade, beginning in 2002, to create a set of “Guidelines for Safeguarding the World Heritage Site of Angkor”.  The Charter is in two parts, entitled “Principals” and “Guidelines.”

The Principals section “outlines some of the basic tenets of conservation that were already agreed upon at the international level and can be found in various charters.”

Notably it references the recommendations of a technical committee of the International Council on Monuments and Sites (ICOMOS) – the International Scientific Committee on the Analysis and Restoration of Structures of Architectural Heritage (ISCARSAH).

From descriptions of building and decorative materials used in the construction of Angkor, their natural deterioration processes, and conservation techniques employed to slow and reverse these processes, to the features and maintenance of the ancient waterworks, the “Guidelines” section gives technical recommendations for the management, protection and preservation of the structures and cultural landscape of Angkor.

The Angkor Heritage Management Framework (HMF), a collaborative project between UNESCO, the Royal Government of Cambodia and the Australian Government was finalized in 2013 in response to growing pressures from tourism, rapid economic growth in the Angkor/Siem Reap region, and the effects of environmental degradation and climate change. In addition, as the Synopsis of the HMF states,  “Angkor’s values are now understood to encompass many more attributes than those acknowledged in the original World Heritage listing citation. In particular, there is greater recognition of the importance of intangible values and continuing cultural traditions.” 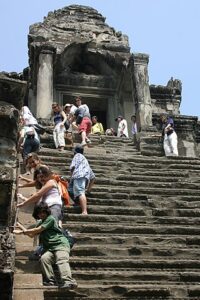 A unique aspect of the Angkor Archeological Park is that it is home to over 100,000 people in 112 historic settlements. Many are descendants of the Angkor period population and hold religious observances that may stem from that period. As noted on the UNESCO World Heritage Angkor page, “the local population, [is] known to be particularly conservative with respect to ancestral traditions and where they adhere to a great number of archaic cultural practices that have disappeared elsewhere. The inhabitants venerate the temple deities and organize ceremonies and rituals in their honor, involving prayers, traditional music and dance.”

Although the “importance of intangible values and continuing cultural traditions” has gained recognition in relation to Angkor and been incorporated into the Angkor Heritage Management Framework (HMF), there has historically been tension between the needs of the communities within the park and the preservation of the structures and cultural landscape iconic to Cambodia.

UNESCO itself notes some challenges to the “integrity” of the site because the inhabitants “constantly try to expand their dwelling areas.”

At the height of the NagaCorp controversy San Chey, executive director of Affiliated Network for Social Accountability, told Khy Sovuthy a writer in the Cambodian independent network of professional journalists, CamboJA, in the February 18, 2021 article, “NagaCorp resort development could degrade Angkor, Unesco warns,” that, “With authorities quick to ban locals from extending or improving homes in the far reaches of the designated park in the past, it did not make sense to allow such a large development just outside.”  He continued, “The Apsara Authority often bans people who build houses or cages for chickens, ducks or pigs, based on the criteria of the World Heritage Zone.” He said. “The NagaCorp plan is hard construction. It will impact the condition of the world heritage site.” 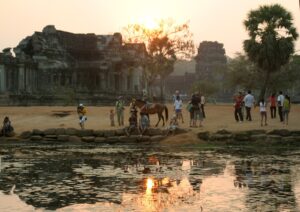 Richard Mackay and Sharon Sullivan, in their 2008 paper, “Living with heritage at Angkor,” presented at the 16th ICOMOS General Assembly and International Symposium: ‘Finding the spirit of place – between the tangible and the intangible’ stated,

“Until recently, the local people at Angkor have been excluded from management decisions, have labored as workmen under the direction of foreign “experts” and their longstanding rights to farm and utilize the area for religious practice have been increasingly restricted in the interests of conservation of World Heritage values and the perceived amenity of tourists who are arriving in dramatically increasing numbers.”

Since Cambodia’s reopening in the 1990’s, visits to Angkor have increased from a few thousand per year to nearly 2.6 million visitors in 2018. As Tim Winter noted in his 2007 paper, “Rethinking Tourism in Asia,”

“During a number of ICC conferences and workshops held in Siem Reap in 2003, it was apparent that the pace of construction around that area had placed major strains on the town’s water, sewerage, and electricity infrastructure (ICC 2003). It was observed that many conference participants were particularly concerned that the tourism industry was putting significant demands on the underground water table, a situation that would impact on the structural stabilities of the Angkor temples themselves.”

The Angkor Heritage Management Framework (HMF) aims to address the issues that exist between the Khmer communities in Angkor, tourism, site conservation, and a changing climate through ten conservation policies. These include an emphasis on sustainable development “based on inclusive and equitable growth that ensures economic benefits flow to the rural poor” (Policy 5) and tourism that “will be managed to provide benefits for local people, create industry partnerships, reduce site impacts and provide a positive visitor experience that transmits the heritage values of Angkor.” (Policy 6).

The HMF also states, “traditional knowledge and cultural expressions at Angkor are an integral part of Cambodia’s rich heritage which will be respected, protected and maintained” (Policy 4) and emphasizes that “communication with the community and stakeholders at Angkor will be strengthened.” (Policy 9).

With forty-nine years of the fifty-year land lease deal remaining between the Cambodian government and NagaCorp, it will be interesting to see which will prevail, NagaCorp’s “Angkor Lake of Wonder” or the ideals of the Heritage Management Framework.