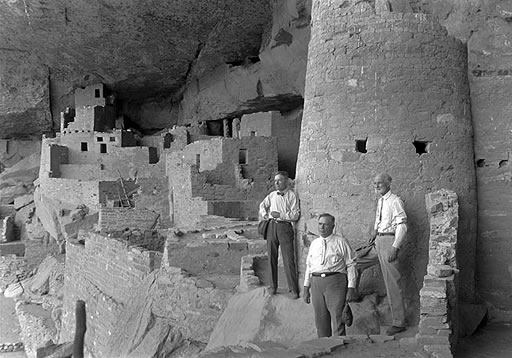 Ten days of Christie’s auctions in May 2018 offered 1,500 European, American, and Asian artworks from the David and Peggy Rockefeller Collection. The sales grossed $832.6 million, the highest auction total ever for a private collection, all of which was distributed among twelve charities. Rockefeller’s Native American art and artifacts, of less intrinsic value but great personal importance, were reserved for direct donation to the MFA and the National Park Service’s Chapin Mesa Archaeological Museum.

Jesse Nusbaum and the Building of Mesa Verde National Park 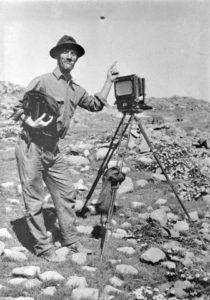 The Rockefeller Estate gifts to Mesa Verde Park reflect John D. Rockefeller’s personal commitment to the park at a key time in its development, and his friendship with its superintendent, archaeologist Jesse Nusbaum. Nusbaum, who was appointed superintendent in 1921 at age 32, had actually worked surveying and photographing ruins there as early as 1907, later completing the Balcony House work for journalist and pioneering preservationist Virginia McClurg.

Nusbaum described the condition of the park and its staff when he inherited it as an “unholy mess,” where nepotism reigned and staff and their families illegally excavated and sold pots from ruins. Facilities for visitors were negligible, and the locals used the park as a place for roistering and drinking. Resisting attempts by local politicians to conciliate the locals, Nusbaum fired the worst of the staff and moved himself and his wife to Mesa Verde, where he built a Hopi-style home, made his own Spanish-colonial style furniture, and when the snows came, they wintered there alone, doing archaeological work in the park. Nusbaum first reduced, then ended grazing in the park, halting the already limited coal-mining, and built catchments to try and regularize water access.

Not satisfied with stabilizing and protecting the land, Nusbaum also developed a professional administration for visitors to the park, regulating entry and access, putting up signs to keep people off of ruins, and creating campgrounds. In fact, thanks to the proliferation of the American automobile, the park was already becoming seasonally overcrowded. Mesa Verde remained an educational experience, unlike the purely playground atmosphere of some other national parks. Nusbaum delivered lectures for the public in the evening, and soon involved the many Navajo laborers, who formed 90% of the workforce, in doing evening “sings.” 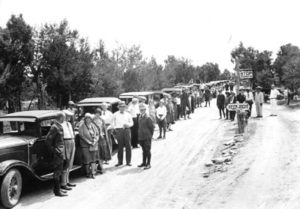 Cars line up for the vehicle tours of Mesa Verde that started at the museum. 1929. (Courtesy: Mesa Verde National Park)

While his relationship with the neighboring Utes was more difficult, Nusbaum felt sympathy with the Navajo’s harsh lives, and built hogans for the park workers to make them more comfortable. His wife, a nurse, treated workers and visitors for injuries and after much lobbying, in 1926, the federal government authorized tents and finally a small hospital.

Nusbaum had to constantly fight off attempts by local politicians to influence its management. When a politician supported by the Ku Klux Klan came to the park, the group asked to use the site for an initiation ceremony and invited Nusbaum to join the group; he armed his men with axe handles and told the Klan to “get out.”  The park’s “museum” was a poorly maintained log cabin when Nusbaum arrived; it was run by a local who claimed that the displays belonged to him. Nusbaum forced the man to give up the keys, and as soon as his own house was built, Nusbaum began working on a museum that would be fireproof and could safely hold a larger collection.

Nusbaum Made Rockefeller a Partner in Park Development and Archaeology 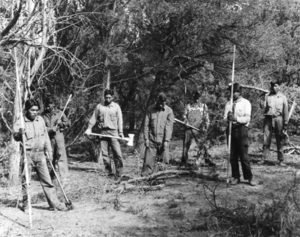 John D. Rockefeller, Jr. first arrived Mesa Verde National Park on July 3, 1924, with his wife Abby Aldrich Rockefeller and sons John III, Nelson, and Laurance. The trip to Mesa Verde was in many ways a typical outing for both moneyed and ordinary American travelers, but Nusbaum was focused on bringing in the Rockefellers as park sponsors and supporters. He gave the Rockefeller family a personal tour of the park and its impressive sites; they visited the museum, and Nusbaum’s wife Aileen produced a pageant for their entertainment.

Rockefeller was immensely impressed with Nusbaum and the work that he and Aileen had done. Rockefeller donated funds to build a four-room section of the museum, now known as the Chapin Mesa Archeological Museum, which were architecturally designed to blend into the site, an innovation that led the way for later park buildings throughout the Southwest. 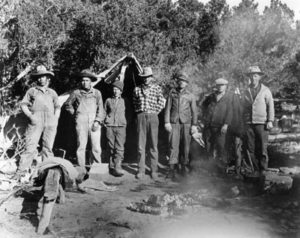 Rockefeller also funded the archaeological work that Nusbaum undertook in the quiet months of winter. Nusbaum rarely had professionally trained staff, so he taught his local workers archaeological skills himself. In Rockefeller-funded excavations from 1924 to 1929, Nusbaum was able to gain far greater understanding of the Anasazi peoples and recover important materials for the park museum.

The gifts to the museum include a Navajo (Diné) rug with the woven initials J.D.R.; pots by San Ildefonso artist Maria Montoya Martinez (Poveka) and her husband Julian Martinez; wood sculptures by John Louis Clarke, and paintings by artists of the Taos School, including Eanger Couse and Joseph Henry Sharp.

The Gift to the Museum of Fine Arts, Boston 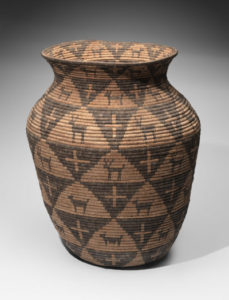 Basketry storage jar
1910–1925
Willow and devil’s claw
Gift of the Estate of David Rockefeller from the Collection of David and Peggy Rockefeller
Photograph © Museum of Fine Arts, Boston

In the case of the Museum of Fine Arts Boston (MFA), the gift of 52 works by artists from 13 Native American tribes and nations is particularly timely. The MFA has stated that its Native American collection had been understudied and largely left in store for decades. To remedy the situation, the museum has recently begun a “renewal of its commitment to the collection, interpretation and display” of Native American art. The gifts from the Rockefeller collection to the MFA includes Plains beadwork, Navajo rugs, pottery, watercolors and baskets.

The Boston museum’s Art of the Americas wing opened in 2011. In giving new attention to the MFA’s early Native American acquisitions. Its galleries do not so much present a timeline as a narrative about development and change, for example, showing pottery of the ancient Mississippi Mound Builders and the overtly contemporary ceramics of Cochiti Pueblo, Berkeley, UCLA and Parson-trained Diego Romero.

The MFA’s current exhibition, “Collecting Stories: NativeAmerican Art,” documents the early years of MFA collecting after the museum opened in 1876. This exhibition tells as much about many other U.S. museums as it does the MFA, as it explores the justification for relegating Native American materials to anthropology and natural history museums during much of the 20th century. In recovering Native American materials from obscurity and giving them pride of place in fine arts museums, the MFA says that, “As both works of art and souvenirs, these objects initially fit into the MFA’s educational mission to represent art in all media and from all cultures.”

Because the group of Native American objects gifted to MFA Boston and Mesa Verde from the David Rockefeller Estate were displayed in the Mt. Desert Island property in Maine, the collection is new to the public. Its display at Mesa Verde will now enable many Americans to see this part of U.S. art history and archaeology together in the landscape that inspired it.