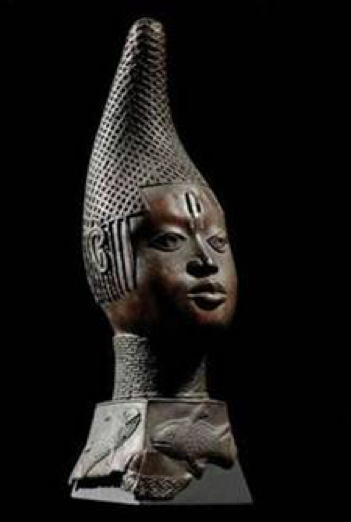 Four years of discussions among a “Benin Dialogue Group” have resulted in a tentative commitment between the Court of Benin, Nigerian museums and several European museums with major Benin collections to eventually establish a permanent display of loaned European museum materials in Benin City, Nigeria.  The actual objects to be loaned and exhibited are expected to come from different museums on a rotating basis. Major collections from Benin that form part of the discussion are in the Ethnological Museum of Berlin, the British Museum, and the Louvre, in Paris.

Neither the items to be displayed nor which museum collections will be involved had been determined by the date of the meeting last April. These questions are still unanswered, and at the most recent August meeting of the Benin Dialogue Group in Cambridge, UK, the remaining issues, such as a commitment from Nigeria to guarantee immunity from seizure, were not advanced.  Other, more practical arrangements for insurance and security are, for now, also on hold, given the longstanding civil crisis in Nigeria.

The Museum of Anthropology and Archaeology (MAA), part of the University of Cambridge’s Museum consortium, figured in the August discussions. In 2016, the Jesus College Student Union in Cambridge voted unanimously to repatriate a bronze cockerel known as the Okukor to Nigeria. The cockerel was taken from Benin in the notorious 1897 British punitive expedition. It was displayed as part of the décor of the dining hall in Jesus College, Cambridge for many decades. The Okukor remains at the college, but is now in storage.

British writer Jonathan Jones has written that the cockerel statue should be returned to Nigeria unless it can be displayed in a context that does honor to it. He compares it to another statue at the school that is involved in controversy, that of Victorian imperialist Cecil Rhodes, which Cambridge students sought to remove or destroy.  He writes:

“I think there’s a case for demolishing the Rhodes statue on aesthetic grounds alone. It’s an ugly, third-rate work that jars with its beautiful surroundings… This [cockerel] is a great work of art, but it is on view as a kind of heraldic mascot. What a patronising attitude. Jesus has three cockerels on its official crest, so this sculpture has been appropriated as a heraldic symbol. It is completely wrong for a work of art of this calibre to be trivialised like this, or displayed in a college hall with no sense of its context, history or aesthetic significance.”

Jones strongly urges making the statue available to the most people possible, but rather than returning it to Nigeria, argues that public access and recognition are of the first importance: “The art of Benin is astounding; it is a great ambassador for Africa. The argument over ownership will never go away, but people who see the British Museum’s Benin masterpieces come away awestruck by Africa’s creative legacy.” He writes, “Why not simply give it a proper display at the city’s Fitzwilliam Museum? There it can take its place as the masterpiece it is. If Cambridge can’t do it that basic honour, then it really should go home to Benin City.”

African writer Kwame Opoku contextualizes the argument for repatriation within an article on an exhibit titled ‘The Return of the Lost Treasures: An Exhibition of Repatriated Artefacts,’ organized by the Nigerian Commission on Museums and Monuments (NCMM). Opoku’s piece appears in Modern Ghana News: “Nigeria Celebrates Return of Lost Treasures; The Lost Nigerian Treasures Are Not Yet Back.”

The exhibition, made up of items seized by various customs authorities as contraband, was widely dismissed for being made up of second and third rate artworks, fakes, and tourist souvenirs. Opoku derides the exhibit as a sham, since it did not include a single item that could be called a ‘treasure’ – even at a stretch. The returned items instead were of little artistic or historical interest and had, Opoku says:

“been returned as a matter of routine and co-operation between customs of Nigeria and the States concerned. They were not returned because of demand by Nigeria and indeed, in many cases, Nigerian authorities would not even be aware that such objects have been taken out of the country until they are seized. The objects would not even have reached the Western museums and would have no specific name except an identification number used at seizure.”

(So much for the repetitive and uniformly over-hyped press conferences that are announced each year in the US and are held by customs authorities celebrating the “return of inalienable treasures essential to the identity” of whatever country is concerned.) 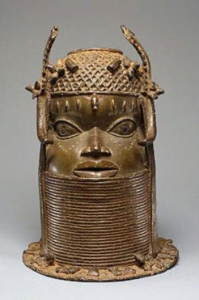 Opoku also calls the project by Western museums to loan back items to Nigeria, “a ridiculous scheme resulting from the miserable Benin Plan of Action for Restitution, to set up a Western museum in Benin.” He says that returns of important Benin objects to Nigeria have come about not in seizures but through voluntary returns by private collectors and museums in the West, citing to items returned by a British citizen, Dr. Adrian Mark Walker and by the Museum of Fine Arts, in Boston.

Opoku faults the Nigerian government for failing to demand return of major artworks. He urges the Nigerian Government to make lists of all known items in Western collections from Benin, and to contact museums in the Western world requesting the return of Nigerian artefacts that may have been stolen, looted, or acquired under dubious circumstances, including especially the Benin artefacts that were taking during the British invasion of 1897.  He says the Nigerian diaspora should make the same demands in their countries of residence and citizenship; further, he sees exhibition and even acquiescence to worldwide scholarship as capitulation. He says that no Nigerian official should be involved in any way with any display or publication of Nigerian materials in foreign collections.

Opoku is from Ghana, but he clearly intends that his proposals be taken as extending not only to objects looted from Benin, but also to any artworks taken from any African country under colonial or imperialist pressure. His overall point is that, “fear of confrontation… and a subservient attitude in reclaiming what obviously belongs to Nigeria, are not recommendations for the determined and decisive leadership that the African Continent sorely needs.”

The Benin conflict in which many hundreds of extraordinary works of art were seized and taken to Europe began in the 1890s, when the Oba (King) Ovonramwen, Benin’s ruler, demanded that British traders in West Africa pay customs duties to Benin, and after a team of nine officers sent by Britain’s west African Niger Coast Protectorate to meet with him were ambushed and killed. The killing of the officers became the official justification for sending a 1,200 man expeditionary force to Benin City. The troops killed thousands and looted and destroyed Benin’s capital. The Europeans were astounded by the wealth, artistic elegance and skill in bronze-casting displayed in the Benin treasures. After Benin’s royal capital was looted, the objects were taken to Europe and scattered in many countries, where they have been, as Jonathan Jones notes above, ambassadors for African culture.