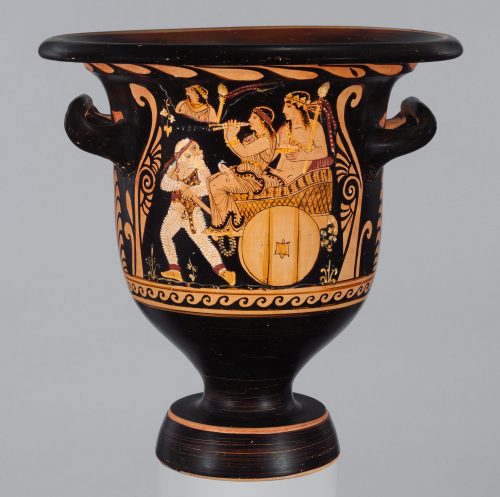 Today’s announcement of the seizure of an ancient Greek vase from the Metropolitan Museum in New York is an example of how prosecutors and a self-styled artifacts hunter can make hay with claims that were already being dealt with in good faith between a museum and a source country government.

The real story is that a major museum bought an artwork in 1989, exhibited it for decades, was denied access to information about it for more than 25 years, and is now attacked for holding “loot.”

Dr. Christos Tsirogiannis claims the credit for discovering a looted object, by using decades-old photographs and records the Italian government supplied to him – but which Italy has NOT made available to museums. Tsirogiannis matched images in the archive of Giacomo Medici to a vase that has been on public exhibit at the Met for decades. He claims the Met never responded to his inquiries, so he went to New York police, who, according to Tsirogiannis, said this was a “great case.”

Tsirogiannis matched images in the archive of Giacomo Medici to a vase that has been on public exhibit at the Met for decades. He claims the Met never responded to his 2014 inquiries, so he went to the police this year. The Met says that they reached out to the Italian Government in 2014, but got no response. After all, the vase belonged to Italy – not Tsirogiannis, a private party with no possible ownership interest in it.

Finally, the Met sent the Italian Culture Ministry a formal request in December 2016, asking the case to be resolved, and was still waiting for guidance from the Italians when NY prosecutors contacted the museum in June 2017.

Why did prosecutors issue a warrant to seize an object that was already the subject of negotiations between the museum and a source country?

Why does Tsirogiannis have access to 22-year-old archives, and not museums – so he can play a game of “Gotcha!” when it is the Italian government that failed to act?

As CCP noted in an article on the need to make databases of stolen material available to museums, Tsirogiannis’ reluctance to make the archives public is that he and other researchers are simply opposed to any trade or collecting of ancient art. In his Statement of the Committee on Illicit Trade in Cultural Materials to an ongoing auction at Christie’s, he wrote:

“The Committee on the Illicit Trade on Cultural Material highly deplores such sales… In accordance with our statutes, we report any illegal activity, or trade of potentially illegally-acquired material culture. Furthermore, we aim to contribute in any form to discourage commercialisation of archaeological material.”

CCP’s earlier article pointed out that during the 2016 discussions on renewal of the US Memorandum of Understanding with Italy, the Association of Art Museum Directors (AAMD) spoke out. The AAMD stated that, “the MOU should be amended to encourage Italy to make the contents of the Becchina and other dossiers readily available to the general public unless…widespread disclosure would compromise an existing criminal investigation or claim.” It was an impossible situation for museums, “to be blamed by Italy, the press and others for owning objects with provenance issues, while simultaneously denied the ability to confirm whether those objects passed through the hands of these dealers.”

CCP sought release of the archives through a Freedom of Information request on December 12, 2014, to Glasgow University, where this archival information is held by the Scottish Centre for Crime and Justice Research and or the School of Social and Political Sciences. They have never responded.

A cynical, self-seeking scenario has been played out too many times at the expense of American museums and the American public. Museums do a better job than any other institution possibly can to identify stolen or looted objects, but they cannot do their job if they are denied access to information.

For more this month on the crucial need for access to information on stolen objects, see: Due Diligence: Access to Databases of Stolen Antiquities Denied, July 10, 2017.