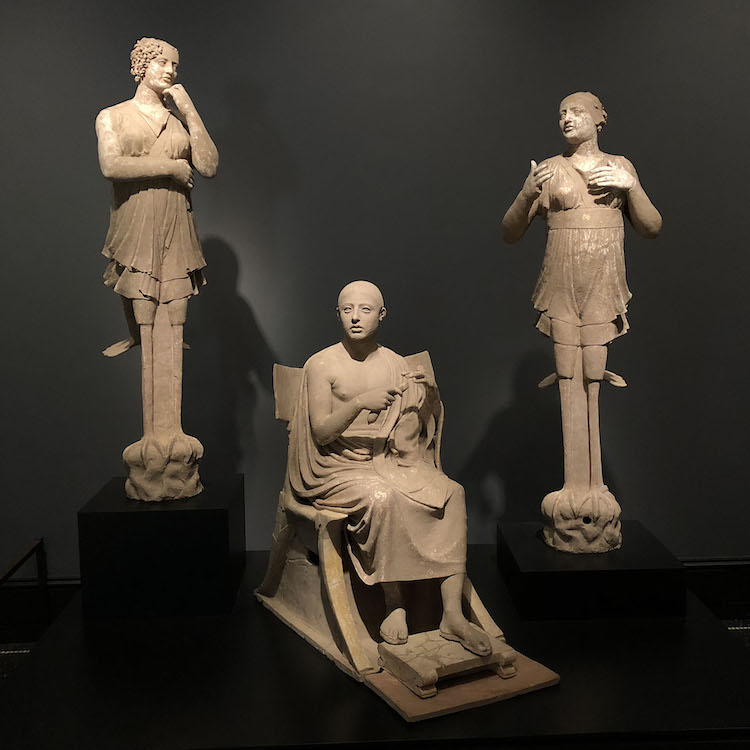 Sculptural Group of a Seated Poet (Orpheus) and Sirens, 350–300 BC, at the Getty Villa in Malibu, courtesy J. Paul Getty Museum, Los Angeles.

Cambodia Claims Objects Donated and Sold by Latchford to Metropolitan 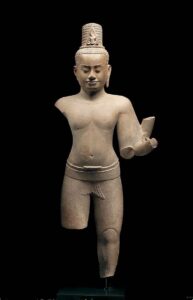 Nine objects from the Metropolitan Museum of Art’s Cambodian collection are currently embroiled in a controversy over their provenance. The Cambodian government claims that these nine artifacts were stolen from the country, prior to being sold or given to the museum by the art dealer and collector Douglas Latchford. Latchford, who passed away in 2020, was a prominent figure in the South Asian art market. He was honored by the Cambodian government in 2008 for his contributions to Cambodian museums. However, shortly before his death, he was indicted for trafficking in stolen artifacts, including most of the objects which passed through his hands en route to the Met, between 1983 and 1998. Because of the chaotic situation in the country both during and after the civil war, investigations regarding the origins of artifacts were impossible until recently. Furthermore, museum leadership acknowledges that standards for due diligence in provenance were considerably lower thirty years ago than they are today.

Cambodia’s current claim is based on evidence provided by Toek Tik, a Cambodian citizen and former temple looter, who chose to assist in the identification of stolen objects to make restitution for his past actions. Toek Tik has stated that thirty-three objects in the Met’s collection were among those he helped to steal, which were subsequently sold to unscrupulous dealers, many of whom did business with Latchford. Toek Tik’s evidence is the foundation of Cambodia’s current demand for these objects’ return, but his recollections have already proven to be imperfect and he is sometimes vague about the details of specific objects, which may only resemble those he remembers stealing.

The museum, the Cambodian government, and the US State Department are now in a stand-off, as neither Cambodia nor the Met are yet willing to share the evidence each claims to have of the provenance of the objects at issue. 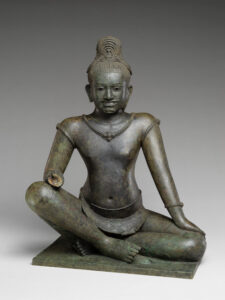 The Metropolitan Museum of Art has been inundated with recent claims that artifacts in their collection have been stolen, along with demands for the repatriation of objects. An upcoming exhibition at the museum will put 160 classical artifacts on display, before their permanent return to Greece.

This summer, two further warrants for the seizure of objects from the collection were issued by New York law enforcement officials. The first warrant is for an Indian sculpture of a Hindu deity, dating from the 6th century. The second warrant covers a group of Greek antiquities collectively worth $11 million, including a marble head of the goddess Athena which is worth $3 million. The head, which dates from the third to the second century BCE, was once part of a lifesize sculpture of the goddess, and is an extraordinarily expressive example of Greek art. 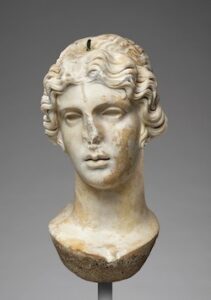 On September 9, 2022, a group of superb terracotta sculptures known as the “Poet and Sirens” was delivered by the J. Paul Getty Museum to representatives from Italy, including General Roberto Riccardi, Commander of the Carabinieri’s Command for the Protection of Cultural Heritage. The sculptures were stars of the Getty’s collection and some of the most evocative examples of Greek art in any U.S. museum. They had been at the Getty for 46 years. They were allegedly purchased by Italian antiquities dealers Raffaele Monticelli and Giovanni Franco Becchina after they were found in fragments in a tomb near Taranto. According to the Manhattan District Attorney, they were marketed by Bank Leu in Zurich, Switzerland.

The almost life-size sculptures are some of the most outstanding objects whose looted history has been traced through records kept by Becchina. These records have been in the possession of the Carabinieri for decades but have never been released for use in provenance investigations by U.S. museums, despite many requests from the Association of Art Museum Directors. The Carabinieri have shared them instead with self-described antiquities-hunters and with the Manhattan District Attorney’s Antiquities Trafficking Unit headed by Assistant DA Matthew Bogdanos, whose investigation is responsible for identifying their origin.

A number of other items, identified by the Getty and independent scholars as having been taken illegally from Italy, were also returned: a Colossal Head of a Divinity, an Etruscan bronze stand, a stone mold and a 19th-century painting of the Oracle at Delphi by Camillo Miola.

In 2017, after years of investigation and a search stretching from Jordan to England to the USA, a single illegally excavated coin was seized by Homeland Security at an auction in Denver. The coin, a silver quarter shekel dating from 69 CE, was minted in the fourth year of the Jewish revolt against the Roman Empire. While bronze coins from this period in Israel are commonplace, silver coins are extremely rare, as, under Roman rule, Jews were not permitted to mint silver coins, as these higher value coins could be used for high value transactions, or for ritual purposes, such as paying temple dues.

As such, the silver coins dating from the period of the uprising are, and were, symbols of resistance against Roman oppression. They were made by taking Roman coins, obliterating their imperial imagery and re-stamping them with Jewish emblems. The quarter shekel seized in Denver is one of only four such coins known today, with a value of between $500,000 and $1,000,000. It is believed to have been illegally excavated in the Valley of Elah in 2002.

The auction house, Heritage Auctions, asserted that they were offering the coin in good faith. The seller had provided them with evidence of a pre-1978 provenance, including the documentation indicating that it had been left to them by their father that proved to be false.

Although Homeland Security seized the coin in 2017, they were not able to provide proof that it had been looted. The Manhattan District Attorney’s office launched their own investigation on the grounds that the coin had passed through Kennedy International Airport and therefore fell under their jurisdiction of New York’s dedicated antiquities trafficking unit. This June, just months before the statute of limitations on prosecuting would have expired, New York District Attorney Matthew Bogdanos acquired a warrant for the coin’s seizure. The shekel was handed over to the Israeli consul in New York in a ceremony this summer and will return to the State of Israel. 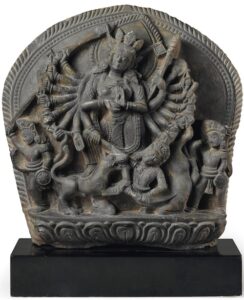 The Black Rock of Durga Stele was carved in the 14th century. In the 1960s, it was stolen from a shrine in Kathmandu Valley, Nepal, where it was still a focus of religious reverence. When it was sold to its first private collector, the Stele was still marked with pigment from temple rituals. The Stele is believed to have been trafficked in the twentieth century by the art dealer Doris Wiener. It was seized in 2022 by New York’s Antiquities Trafficking Unit as part of an investigation into her daughter, Nancy Wiener. Nancy Wiener was subsequently convicted of  dealing in stolen cultural property, said to be in the millions of dollars. The Durga Stele’s assessed value is only about $18,000, but its cultural value is immense. It was handed over to the Nepali Acting Consul General Bishnu Gautam in a ceremony in New York at the end of August 2022.