ICOM is issuing a Red List as artifacts and art from Potemkin’s bones to Hunnish diadem are taken by Russia from occupied cities. 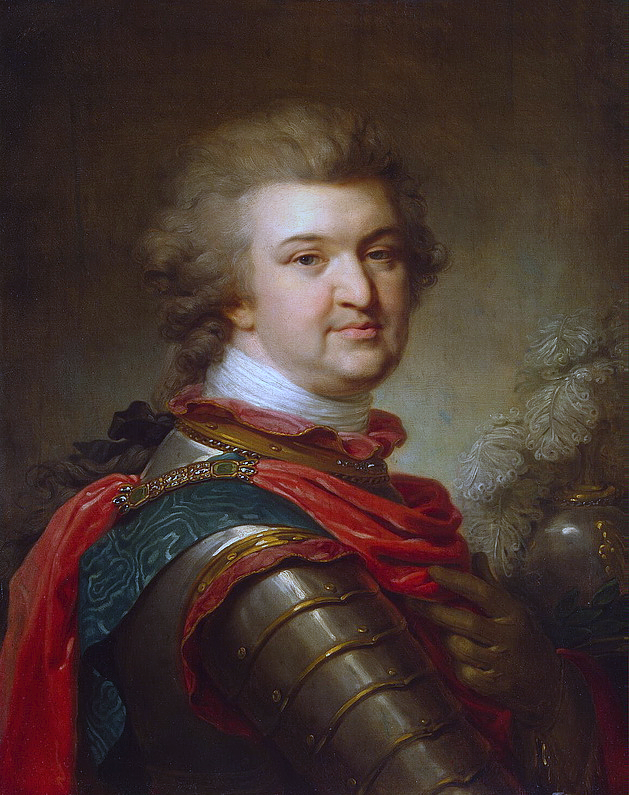 Phony referendums in the occupied territories of Donetsk, Luhansk, Kherson, and Zaporizhzhia in Ukraine are giving Russia legal cover for removing museum collections there. On October 19, 2022, Russian President Putin declared martial law in the annexed territories. The martial law declaration and the official annexation of territories now claimed to be part of Russia are the ostensible grounds for taking their museum collections under Russian “protection.”

Ukraine and international bodies have protested the destruction of museums and educational institutions and seizure of cultural artifacts as a violation of the Hague Convention for the Protection of Cultural Property in the Event of Armed Conflict. Russia says they are now part of Russia, subject to Russian Federation law, and international law is irrelevant to government actions on Russian territory.

A museum staffer in Melitopol told the AP that Russians had spent weeks searching for objects hidden in a secret basement room in the museum and removed exceptional golden objects, including a Hunnish period gold tiara and approximately 1700 other objects when the cache was discovered.

“The attitude of Russians toward Ukrainian culture heritage is a war crime.” 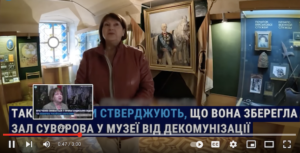 The new director, Tatiana Bratcheck, is featured in videos welcoming Russian “guests” to the museum.

In the case of the Kherson Regional Museum, it’s not known what objects the Russians are taking. While much of its collections are natural history and WW2 focused, the museum also contains archaeological artifacts from prehistory onward. The museum’s new director, Tatiana Bratcheck, has been deemed a possible Russian collaborator by Ukraine’s government.

Another ”new director,” Nataliya Leonidovna, had already been installed in the Oleksiy Shovkunenko Kherson Art Museum. According to the actual museum director, Alina Dotsenko, Leodidovna showed up in July with four members of the FSB (the Federal Security Service of the Russian Federation, which has replaced the KGB) and Russian police. The Kherson Museum contains some 10,000 items, from icons of the 17th century to 19th and 20th century Ukrainian painting and European artworks.  New ‘security’ and new Russian sympathizing staffers have been put in place; the status of items in the collection storage is unknown. It’s been reported that a large sculptural monument was dismantled and taken to Russia.

Russia has forced thousands of residents to leave Kherson and taken them deeper into Russian-held territory as Ukrainian forces move in towards the city.  Artworks from the Cathedral of St. Catherine and even the skull and bones of Grigory Potemkin have been removed.  The remains of the 18th century Russian commander – much admired by Putin – were exhumed from the cathedral and taken to Russian-occupied territory.

The pro-Russian Governor of the Kherson region, Vladimir Saldo, told Russia’s state news agency on October 28th that “We have moved the remains of His Serene Highness Prince Potemkin from St. Catherine’s Church and the monument itself to the left [east] bank.”

Russia’s President Putin has claimed to be renewing Potemkin’s vision of a Russified Ukraine – and particularly Crimea – as a necessary extension of Catherine the Great’s Russian empire. It was Potemkin who convinced her to annex the Crimean peninsula in 1783. The taking of Potemkin’s bones and the monument beneath which they were buried from Kherson is said to have been the work of a special Russian mission.

However, historian Simon Sebag Montefiore told the New York Times, “Potemkin would have despised Putin and everything he stands for.” It appears that Putin does not understand Potemkin’s or Catherine’s goals for a cosmopolitan, outward-looking Ukraine and as Montefiore notes, Putin has destroyed the very cities Potemkin helped to build. 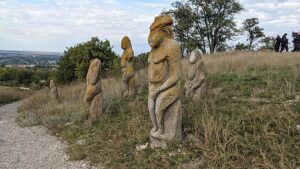 Polovtsian stone sculptures (babas) on Mount Kremenets in Izium city (Kharkiv region of Ukraine) after Russian shelling during the Battle of Izium (2022). One statue was completely destroyed by a projectile. Photo Ministry of Culture and Information Policy of Ukraine. CCA 4.0 International license.

The Ukrainian press reports that the removal of objects from museums in occupied territories started early in 2022. Major collections of some of the greatest ancient Scythian gold ornaments were taken from Crimean museums including the State Museum-Preserve of Tauric Chersonesos and Kerch Archaeological and Historical Museum to Russia and there are reports of extensive looting and damage of ancient sites in Crimea and across Ukraine.

A number of  “stone babas”, roughly made but powerful stone figures dating from the 6th century BC to the 13th century AD have been removed from or destroyed in situ around the country by Russian forces. Similar figures from Scythian to Turkic cultures are found in a variety of forms from Eastern Europe and across the steppe lands as far as Mongolia. (A 2014 article described an ill-advised decision by communist authorities to put them on open display in the street in Kirovohrad in central Ukraine, but they have received better attention since.) 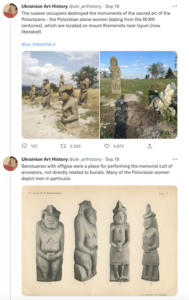 In September, ICOM, the International Council on Museums, announced publication of a Ukraine Emergency Red List of Cultural Objects at Risk. By the end of October, it had still not been published on ICOM’s website. The purpose of a Red List would be to identify typical Ukrainian materials that might be looted or stolen, using legal artifacts from museums as examples. The Red List for Ukraine, whose compilation was first announced last June, is intended to alert law enforcement and the public of the types of objects considered most at risk. Red Lists provide extremely basic information and many objects shown are not exclusive to the countries for which Red Lists exist. They are published in poster and booklet form and an online database of all Red Lists is sortable by material and country of origin.

Although ICOM’s announcement stated that there was ‘evidence’ of stolen objects flowing back to Europe, actual data is lacking.

While a Ukrainian investigation turned up a large cache of small, portable antiquities in the Kyiv office of a former Crimean parliamentarian that may have been taken from the storerooms of Crimean museums, most removals appear to be undertaken directly by Russian forces, including by Russian museum workers dispatched to Ukrainian museums in search of specific national treasures, and the looted objects have been taken to Russia.

Will Russian museums acknowledge that the art is stolen? It’s doubtful. Russian museums have displayed thousands of objects taken from German museums following WW2, grudgingly acknowledging their looted origin only in the last decades. Although restitutions of materials from what Russia calls the “Great Patriotic War” have been discussed between Russian and German museum professionals for years, there has been little or no progress on returns.