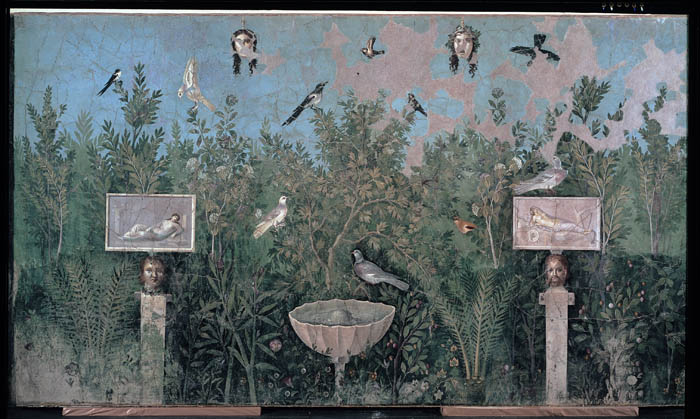 A fusion of contemporary and ancient artworks will soon be created from the ruins of Pompeii. The ancient city, smothered in the ashes of Vesuvius, is the source of archaeological fragments that will be incorporated into contemporary artworks. An exhibition, Pompeii at Madre: Archaeological Material, includes a project for contemporary artists, who will work in summer 2018 with pieces of pottery and marble fragments of statues to create new sculptures and installation pieces. The intent is not to destroy the ancient elements, but to surround, build around, and utilize them to allow a new creative expression to emerge. As director-general of the Pompeii Archeological Park, Massimo Osanna, told Hannah McGivern at The Art Newspaper, “what is left of the ancient forms will remain intact… so it is radical but also respectful.”

The project and ensuing exhibition at the Museo d’Arte Contemporanea Donnaregina (Madre) in Naples challenges archaeological dogma. For many archaeologists, every unearthed pottery shard, fragment of sculpture or common coin has value in establishing the archaeological record and should be preserved in its found state, even if that means that artifacts remain forever in deep storage, and never seen by the general public.

The inspiration for combining the contemporary with elements from ancient Pompeii developed from a collaboration between Osanna and Andrea Viliani, the director of the nearby Madre. Osanna commented in The Art Newspaper, “We share a philosophy that cultural heritage is not for specialists but for the millions of visitors who come every year, so we need to adapt the ancient site to the contemporary world.” He continued, “That is where we got the idea to reflect on Pompeii as a place of the contemporary.” 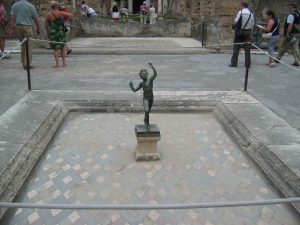 Reproduction of a statue of a faun in Pompeii.[http://www.flickr.com/photos/eugeniayjulian/ Eugenia & Julian] Title: Casa del Fauno, Pompei, Italy. Taken on: 2005-06-25.

Everything old is indeed new again as after years of neglect, Pompeii is being dramatically restored under Osanna’s guidance through The Great Pompeii Project, a €105m campaign launched in 2012 by the Italian government and largely funded by the EU.

Pompeii was an ancient resort town on the Bay of Naples. It attracted wealthy Romans to its shores for sea and sun. When nearby Mount Vesuvius erupted in 79 CE, many inhabitants fled in terror, but others were suffocated in the fumes or were buried in deep layers of ash. The town, its inhabitants, their homes, and all the evidences of daily life were frozen in time, down to 81 loaves of bread left baking in bakery ovens. After its rediscovery in 1748, and subsequent decades of excavation, Pompeii was rocked by four major earthquakes and a succession of man-made disasters; two world wars, allied bombing in 1943, four destabilizing economic crashes, looting and mismanagement at the hands of organized crime-controlled contractors. According to Frank Viviano at National Geographic, there were 64 buildings open to the public in Pompeii in 1956 – by 2010 there were only ten.

It is archeological fragments from the 1943 bombing that are being offered to contemporary artists for the creation of new sculpture and installation pieces during the summer 2018 exhibition Pompeii at Madre: Archaeological Material. Osanna hopes to eventually exhibit these works in a contemporary art collection planned for the Pompeii archeological park, as well as to extend the project to other museums worldwide.

The show is presented in two ‘chapters.’ The first chapter, according to Viliani, is conceived after a ‘“hypothetical contemporary domus’ evoking the Pompeian home.” The second chapter will feature contemporary artworks inspired by the history of the excavation of the Pompeiian ruins, and the evolution of ideas sparked by the city’s rediscovery.  The Madre museum will also display ancient Roman artifacts from the city. Artists whose works will be exhibited include Laure Prouvost, Jimmie Durham, Adrian Villar Rojas, Mark Dion, and Andy Warhol.