Home > Museums & Discoveries > Old Salem Museums & Gardens: How a Living Museum in the South Addresses the History of Slavery

Old Salem Museums & Gardens: How a Living Museum in the South Addresses the History of Slavery 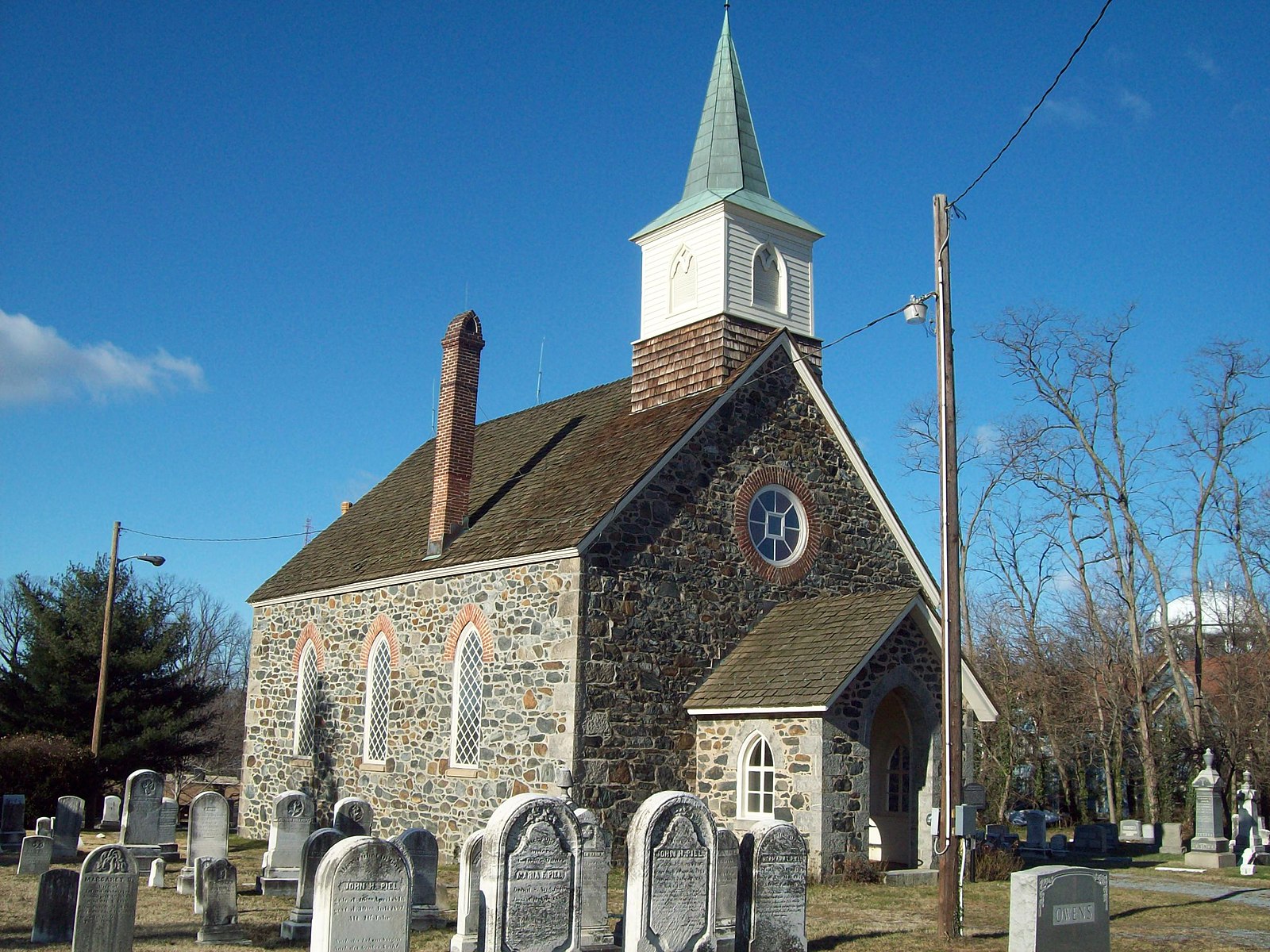 Old Salem Church and Cemetery, December 2009, OpenStreetMap, released into the public domain by its author, Pubdog at English Wikipedia. 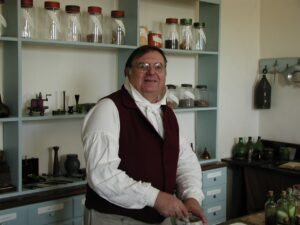 Salem was founded in 1766 in the colony of North Carolina on a nearly 100,000 acre tract of land purchased by the Moravian Church, a Protestant sect established in the fifteenth century in what is now the Czech Republic. The Moravians were among the earliest to dispatch Protestant Christian missionaries, founding missions across the world, in Africa, the Caribbean, and the Arctic. The Moravians came to the Americas in the eighteenth century, in part to establish missions to Native American communities. From the 1740s through the 1760s the Moravian Church settled congregational communities in the colonies of New York, Pennsylvania, and North Carolina.  One of their settlements, in current day Winston-Salem, is now a living museum – Old Salem Museums & Gardens.

The original mission of the institution, when it was established in 1950 as Old Salem, Inc., was to restore and preserve historic Salem’s original structures and gardens. In 1966 Old Salem was designated as a National Historic Landmark (NHL) District. Today, the museum’s mission has evolved from straightforward conservation to include mutual aid projects and a historical education program that addresses Old Salem’s role as a slave-owning institution and centers on the stories of free and enslaved Black members of the Moravian religious community. 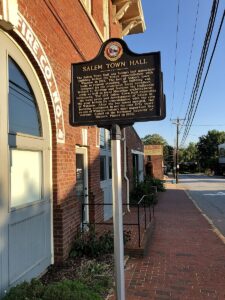 As a living museum, Old Salem uses interpreters in period costume to reenact and narrate life in the town, which was shaped by the direct administrative control of the Moravian Church. The Church owned all land in the tract and leased it to villagers for the construction of homes and buildings. Community members were required to be members of the Church and keep its covenants or face expulsion from the community.

In addition to maintaining the historic fabric of the grounds, the museum utilizes audio tours and demonstrations of typical Wachovian daily activities, including baking, cooking, music, and gardening, to bring the community’s history to life.

Over the years Old Salem’s mission was expanded to tell a more inclusive and comprehensive history of Salem, including the history of the black inhabitants – enslaved and free people of African descent – that lived in the town and surrounding areas. Although the Moravian Church and residents of Salem kept meticulous records, and most of what is known about Moravian history comes from these sources, many histories of the Moravian Church don’t mention its connections to slavery in the American South. Old Salem Museums & Gardens, through their Hidden Town Project, is working to change that.

The Hidden Town Project was started in 2017 to give voices to the enslaved – and later freed – African Americans living in Old Salem from the town’s founding in 1766 through emancipation and slavery’s legacy into the twenty-first century. Through methodical research, and careful interpretation, the Hidden Town Project has incorporated the lives and stories of enslaved individuals into Old Salem’s visitor experience. 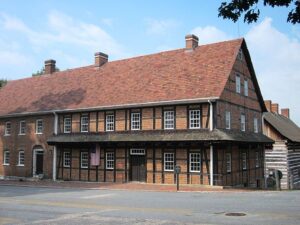 The Moravian Church’s relationship to slavery developed over time. While in the early years of the mid-eighteenth century, slave ownership was not permitted withing the community, the church gradually capitulated to the practice, first by paying slave-owners outside the community to have their slaves work for them, and later allowing community members to own slaves themselves. Some of the enslaved people joined the Moravian Church, where worship was integrated until 1822, and the cemetery was integrated until 1816. As the Moravians became more assimilated into Southern American culture, their enslaved brothers and sisters in the Church were relegated to segregated spaces for worship.

Visitors to the site now experience a multi-part educational program dedicated to telling the stories of the enslaved people who lived and worked there.

Visit Winston-Salem described the experience in its July 9, 2020 article, Hidden Town Project: Uncovering Old Salem’s Unique African American History, which includes “pre-recorded narratives inspired by the lives of 10 enslaved individuals. Stories are told in first person and feel as if each historical figure is talking directly to you. Some of the stories are emotional and painful to hear.”

The tour continues with a visit to the St. Philips Moravian Church, the oldest extant African-American church in the state, where on May 21, 1865, Black community members first heard the news of the Emancipation Proclamation, brought to the congregation by Rev. Mr. Clark, chaplain of the 10th Regt. Ohio Cavalry. 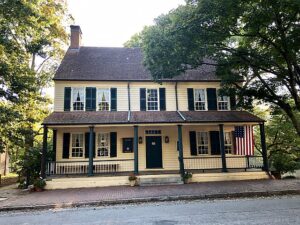 The 1815 addition to the Salem Tavern, located on South Main Street in the Old Salem Historic District in Winston-Salem, North Carolina. It was connected to the adjacent 1784 Salem Tavern in 1832, but the connecting structure was removed during the restoration of Old Salem in the mid-20th Century. Author Warren LeMay, 2 September 2019. Creative Commons Attribution-Share Alike 4.0 International license.

There the story of the announcement is retold, accompanied by the stories of how freed Black community members went on to impact history. As Old Salem’s Director of Moravian Research, Martha Hartley explained to the Visit Winston-Salem blog, “You learn the story of nearby Happy Hill, the first African American neighborhood in Winston-Salem, and the Freedmen who established one of the first schools for black children in the South. You hear the impact of these lives, often for the first time. People weep. It is real. It is moving. It is truth in history. It’s incredibly powerful.”

Old Salem is now a member of the International Coalition of Sites of Conscience, a global network of historic sites, museums, and monuments that hold the memory of often-traumatic periods of history and enable visitors to make connections between the past and current human rights issues.

Winston-Salem, the modern township surrounding the museum site, has a high degree of food insecurity and food deserts. Predominately Black neighborhoods tend to be most affected, with some studies estimating that one in four children in North Carolina have “insufficient food to meet nutritional needs.”

In 2020, at the start of the pandemic, Old Salem Museum & Gardens quickly transformed their gardens into “victory gardens” and partnered with food banks and community groups to distribute the produce that they raised. They have also been using their bakery – The Old Salem Winkler Bakery Annex – to bake fifty loaves of bread per day for Second Harvest Food Bank of Northwest NC. 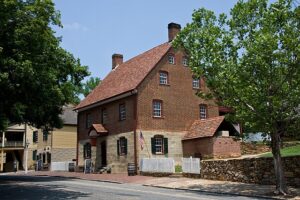 The closure of the site to visitors necessitated by the pandemic has led the museum to pivot their work to research and new forms of digital education. With more of their resources directed to their Study South research initiative, Old Salem has recently produced a number of online projects, including Salem Pathways, an audio adventure through Old Salem through the eyes of one of seven individuals from various points in the town’s history, and THINGS: A Global Conversation, a series of recorded conversations between curators, creators, and experts within and outside the institution about objects from the museum’s collection, or that of the affiliated Museum of Early Southern Decorative Arts. In lieu of the live demonstrations, re-enactments, and interactions with historic buildings and artifacts that visitors used to enjoy on site, the museum has begun the Old Salem Learning In Place Video Series for K-12 students.

Like most modern museums, the MESDA Research Center, and Moravian Research Center have much of their collections online and offer virtual and limited in person research assistance. The Seed Saving Lab will host appointments beginning April 1st, 2021.

The capacity for evolutionary growth demonstrated by the Old Salem Museums and Gardens despite the unprecedent challenges of these times is impressive, and will surely inspire other regional museums to pursue their own self-reflective projects, and to bring what they learn about their pasts, the good and the bad, to the light.