Now That Jews Are Gone, Egypt Says It Will Restore Sites 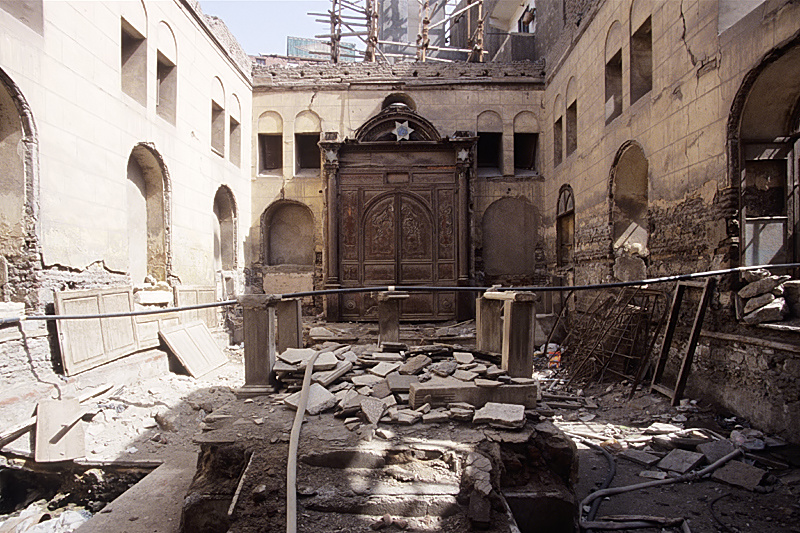 The last Jews in Egypt will have no say in the treatment of their history. No more than 18 elderly individuals now remain in Egypt, out of a population of 80,000-100,000 Jews in the middle of the last century. Virtually all Egyptian Jews left Egypt in forced emigrations in the mid 20th century. About a dozen synagogues remain, including a 19th century synagogue dedicated to 12th century rabbi and philosopher Moses Maimonides (on a site where a synagogue has stood since the 10th century). This synagogue is also known as the Rav Moshe Synagogue. While the interior of this synagogue was virtually gutted prior to is restoration, there are thought to be thousands of books and family records still stored in other Jewish repositories in Egypt. Egyptian officials have not said what will happen to these documents, or whether they will be accessible to families or to foreign scholars.

(It should be noted that the greatest resource on medieval Jewish life and trade are the 300,000 documents and letters that were preserved in the Ben Ezra Synagogue in Old Cairo, known as the Cairo Geniza. The Ben Ezra Synagogue is now a museum open to tourists. The Geniza records were removed from Cairo to England in the late 19th century and are now dispersed and archived in libraries around the world. The Geniza records are invariably cited in international publications on subjects ranging from medieval textiles to international trade in regions as far away as China and present day Russia. If the Geniza documents had not been removed and studied in Europe and the United States, there would have been great loss to history.)

While sporadic cleanup and restoration has taken place at Jewish historic sites, Egyptian cultural authorities have not been consistent or followed through on promises of restoration. The story of the Maimonides synagogue project is one of the most bizarre.

In 2009, Dr. Zahi Hawass, then head of the Supreme Directorate of Antiquities, (and now Honorary Chairman of the Antiquities Coalition Advisory Council) began an 18-month restoration of the Maimonides synagogue in Cairo’s Old Jewish Quarter, utilizing Egyptian government financing of an estimated $2 million. The restoration was described as detailed, well-constructed, and quite spectacular. On March 7, 2010, about 150 Jewish overseas visitors, many of them from Egyptian Jewish families, and some of the few remaining Egyptian Jews, came to attend a private dedication ceremony. Neither the media nor any Egyptian officials attended. It was said to have been a deeply emotional ceremony. A few days later, Hawass announced cancellation of the official opening of the restored synagogue, saying that the opening would not take place because Jews were “dancing and drinking alcohol in the synagogue” at the private dedication.

He called this a “provocation to the feelings of hundreds of millions of Muslims in Egypt and around the world.” At the time, Haaretz reported: ‘”Israel is the Zionist enemy, and I gave this enemy a strong slap in the face,” said Doctor Zahi Hawass.’

The most recent promise to preserve Jewish historical sites by the Egyptian government has yet to be acted upon. Magda Haroun, who is in her sixties, is the youngest surviving Jew living in Egypt. She appealed directly to Egyptian President Sisi in 2016 to preserve Jewish monuments before all were destroyed from neglect. While Sisi did not respond, appointment of a new Minster of Culture appears to have resulted in directives to document all Jewish monuments and antiquities made earlier this year.

Egyptian cultural heritage authorities finally officially announced in May 2017 that they will begin registering Jewish cemeteries and monuments. Saeed Helmy, head of the Islamic, Coptic and Jewish Monuments Department at the Egyptian Ministry of Antiquities, told Khalid Hassan in Al-Monitor that, “These cemeteries are of great significance and cannot be overlooked, because they represent an important era in Egyptian history. They are characterized by their unique, elaborate decorations, as they resemble the small temples built by the Jews in Egypt. We admit that these cemeteries have been neglected for years, even for decades. This step [of documenting them] was long overdue and should have taken place years ago.”

Khalid Hassan reported that, “Numerous Egyptian monuments, including Jewish ones, face neglect and attempted thefts. The threat grew after the 2011 revolution and the ensuing security chaos, declining tourism and deteriorating economy.” However, despite the recent official initiatives, there is still not a single guard at the graveyard at Basateen, outside of Cairo, which Helmy described as, “one of the most important Jewish cemeteries in the world.” The 15th century cemetery’s wall is broken down and the site strewn with garbage.

Nor is it possible under Egyptian law for the Jews who were forced to leave Egypt to claim ownership of the archives or artifacts associated with the Jewish community. These are deemed part of the cultural heritage of Egypt, and as such are not permitted to be exported under Egypt’s antiquities laws.