No Country for Old Achaemenids 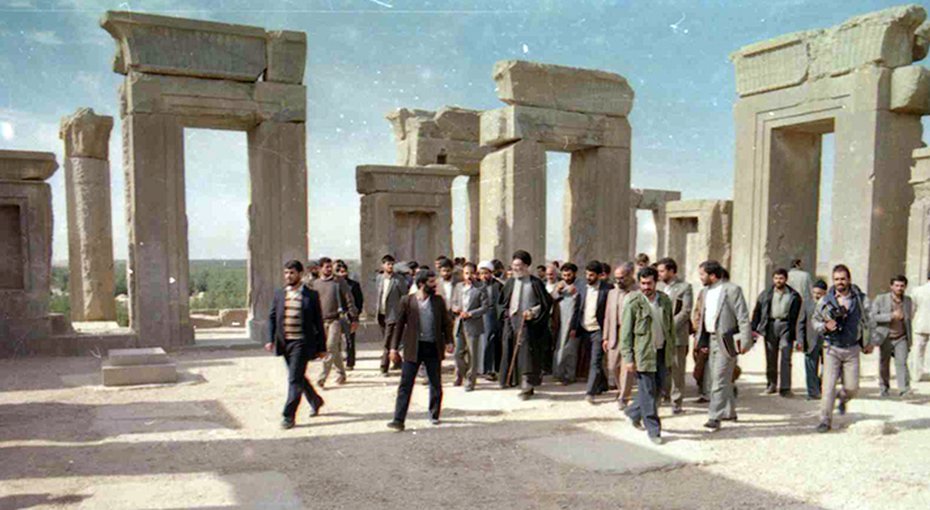 “There’s like 20 RCMP officers flooding my place, the sunshine’s coming in, the crystals are making rainbows everywhere, the bougainvillea flowers are glowing in the sunrise light,” Simon Metke, Edmonton yoga instructor, interviewed after Royal Canadian Mounted Police seized a Persepolis fragment from his meditation room.

“We are simply flabbergasted at what has occurred,” statement by Rupert Wace, UK art dealer. 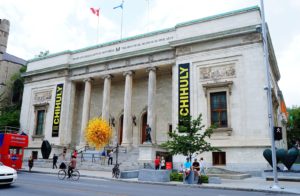 The story was… strange. There was a fragment of a wall frieze – from one of the world’s best known historical sites, displayed by a major museum for more than sixty years, and then stolen from it in a seemingly random act that garnered much press attention. It was recovered after a lengthy investigation that included disseminating images worldwide. When it was found, almost by accident, among the stuffed toys and keepsakes of a yoga teacher in Edmonton, it was seized by the Royal Canadian Mounted Police, prompting a Canadian meme: “Open up, yoga hoser!”

The museum chose to keep the insurance money, so the museum’s insurance company sold it to a London art dealer for over a million dollars. It should have had a quiet life from then on, perhaps in a private collection, then probably in another museum. The dealer exhibited, published, and promoted the object in England. Then in 2017, the dealer made an unfortunate choice; he brought it to one of the world’s great art fairs, The European Fine Art Fair, located in New York City’ Armory.

The object was a stone fragment of a Persepolis wall frieze. It was hardly hidden. It had been studied by scholars and published by the Montreal Museum of Art. Because its theft from the museum was dramatic – and in part because the “yoga hoser” episode was ludicrous – it had a Wikipedia page. It came from Iran, a country that stridently airs its grievances against the West. And it was from the site of Persepolis, which Iran’s government has alternately celebrated as the preeminent symbol of the nation’s greatness, and threatened to bulldoze as anti-Islamic. And in fact, the story of the theft and recovery by the museum was published in Persian in the Iranian press.

In all the time it has been in the West, Iran had never claimed it, nor succeeded in claims to other Persepolis pieces that have come to market in 1971 and 2005. But in October 2017, a NY prosecutor with a flair for self-promotion made it his  cause célèbre. The 8 x 8-inch piece of a Persepolis wall frieze is now on its way back to Iran.

The Case in New York 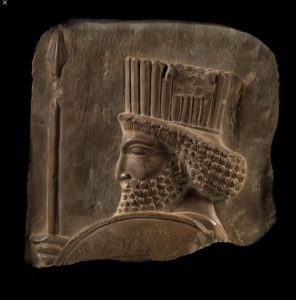 The stone fragment was seized by Manhattan Deputy District Attorney Matthew Bogdanos from Rupert Wace’s booth at the gala opening of The European Fine Art Fair (TEFAF) in October 2017. No criminal charges were ever brought against co-owners Rupert Wace Ancient Art and Sam Fogg Ltd. (How could they be? It had been in a major museum for 60 years and they bought it from the museum’s insurance company.) Nonetheless, talking to a District Attorney gets expensive fast. A threat of prosecution, however unwarranted, could result in hundreds of thousands of dollars in legal fees. In the end, Wace and Fogg agreed to give up the Persepolis fragment.

In an agreement with the Manhattan District Attorney dated July 23, 2018, Wace and Fogg maintained that while they did not agree with the DA’s contentions regarding the legal status of the object, they nonetheless would return it to Iran “in the public interest.” The DANY in its turn acknowledged returning the object to Iran was not an admission of wrongdoing, and that the investigation was concluded.

History of the Object 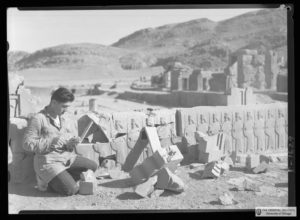 The fragment is now known to have come from a frieze at the Apadana Palace at Persepolis, where a long row of almost identical warriors are represented. It can be seen in a photograph in the early 1930s; then the section of stone appears to be missing in a photo dated 1933, from the collection of the Oriental Institute in Chicago.

According to the District Attorney’s turnover order, Erich Schmidt, Director of the Oriental Institute excavations, informed Iran’s Ministry of Culture in March 1936 that the piece had been taken. Then, the case goes dark. The Manhattan DA acknowledges that there is no explanation of when and how the fragment left Iran, just that it was some time in a twenty-year period.

Certainly, the Persepolis relief was in Canada by 1950, when department-store heir Frederick Cleveland Morgan donated it to the Quebec National Museum. The museum then exhibited it for 61 years.

It was there, on September 11, 2011, that an unknown thief removed it from the wall where it was displayed. It was located and recovered by Canadian police when it appeared in the background of a Canadian Broadcasting Corporation video of an interview with an Edmonton yoga teacher. According to the yoga teacher, he had purchased it on a trip to Montreal for $1400 and thought it was a high quality reproduction.

The museum’s insurance company, AXA Art Insurance Limited, offered the piece back to the museum, but the museum preferred to keep the money that had been paid out in compensation after the theft. The insurance company received title to the fragment, and AXA then sold it to Wace for 1.18 million Canadian dollars. Sam Fogg took a half-share in the object. 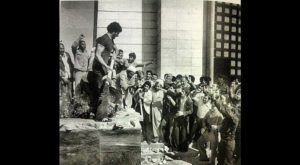 The Iranian law that the prosecutor said justified the seizure seems like the least exciting element of this story, but it should be the centerpiece, because many museums and collections around the world have similar material from Iran from roughly the same period. If this piece is “stolen”, then so may be a lot of other artworks in U.S. and international museums.

In order to treat an object as “stolen” in the U.S., there must be a demonstrable theft from a site or inventory or a law in the source country at the time of removal that is enforced and that vests ownership of all such property in the nation.

Iran’s National Heritage Protection Act dated November 3, 1930, and the Regulation Implementing the Law dated Nov. 3, 1930 relating to the Conservation of Antiquities in Iran (3 Nov 1930) (“1930 Regulation”), do not appear to qualify as valid national ownership laws in a U.S. Court, but that decision would not be made until well into a prosecution. The reason they are unlikely to qualify is that Iranian statutes actually allowed licensed professional domestic looting. Legal, purely commercial exploitation of archaeological sites (as well as illegal looting) was prevalent in Iran until at least 1947.

Such a law is unlikely to qualify as a valid, enforced foreign national ownership law that would make an object “stolen” under U.S. law..

If An Object is Stolen From Inventory Then It Could be Claimed by Iran, But Can Iran Prove That? 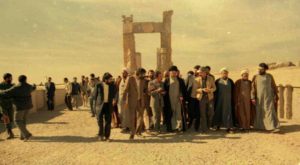 One problem with this scenario, is that there is an almost twenty-year gap in the object’s history. If it was taken unlawfully from the site, it is not clear how or even when this happened. It is not known who took it, who possessed it, when it was exported, when or how it left Iran, or if it was first sold and resold in Iran, or even if the object was recovered by Iranian officials and sold by them.

This gap makes a difference under U.S. law, where a court in an Egyptian antiquity case noted that the fact that a painted coffin cover was in a box in an Egyptian warehouse at one time, and then decades later was in a U.S. museum did not establish that it had been stolen. There was too much uncertainty about what happened in between. 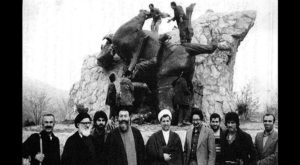 Certain political factions in Iran have argued for the removal of anything from society that will corrupt Islamic sensibilities. Iran’s own modern history raises challenging questions about whether national governments can or should be trusted as the sole custodians of all the art and artifacts ever made, by any peoples who ever lived within their current political boundaries.

Iran’s perspective on its own pre-Islamic cultural heritage has shifted dramatically in recent times. Sadegh Khalkali, a friend and compatriot of Ayatollah Ruhollah Khomeini, tried to discredit Cyrus the Great, calling him debauched, tyrannical, Jewish, and homosexual.

In 1979, Khalkhali called for the destruction of Persepolis. He and his adherents had already destroyed more recent tombs and monuments in Teheran. In Persepolis, Khalkhali mounted a bulldozer and threatened to start toppling the walls and monuments. Angry locals demanded that he stop, and soon he was ordered back to Teheran.

It would seem impossible that this sort of religious extremism would actually result in the destruction of a world famous monument if it had not already occurred in Bamiyan in Afghanistan in 2001, and to many monuments in Iraq and Syria in just the last few years. One cannot be sanguine when governments recognize what a powerful political tool the destruction of history can be.

The different ways of contextualizing the history of the Persepolis relief illustrate how much the choice of particular facts in telling a story can matter in cultural property debates. All that can be said is, “It was in Persepolis in 1933 and not in 1936. Then it was in Canada. Iran has a law on the books forbidding export. Therefore, it is stolen art.” It’s not a very good argument, but when the power is all on the other side, it may be sufficient to pressure a return. The holder of an antiquity is much more likely to give it up than to fight a lengthy legal battle.

When claims are extremely dated, and rest upon the interpretation of a law in force almost 90 years ago, then evidence becomes questionable and the source country may be faulted for waiting too long to make a legitimate claim.

Finally, because similar fragments from Persepolis can be found in museums within a few blocks of where the fragment was seized, and many more in institutions scattered across the U.S. and around the world, this case also raises questions about whether the NY prosecutor is engaged in making very selective prosecutions.  Are claims by art source nations being pursued (and even created where no claim has been raised) against art dealers rather than against museums who are in the same legal boat? If so, that is clearly wrong. Society can also better assess the merits of a cultural policy when it is seen how it affects the entire arts community.