Archaeology, art and tradition will shape home for Benin treasures.

The independent Kingdom of Benin (now Edo province in Nigeria) was one of the  most highly developed West African cultural centers. It was destroyed in a ‘retaliatory raid’ by British forces in the culmination of a trade war over ivory, palm oil and rubber. In the early 1890s, the Oba, its ruler, resisted following a treaty favoring British economic interests and in 1896, most of the British members of mission ostensibly heading to negotiate with the Oba were killed when they attempted to reach Benin City. The British sent a large invasion force in 1897 in response, with instructions to burn Benin’s towns and villages. Over one thousand British troops seized what is now Benin City in Nigeria. 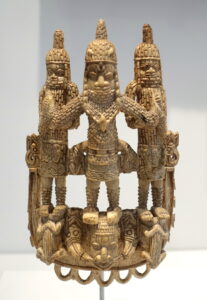 Troops burned and looted the city and the palaces of the Oba and nobility. The city was looted of thousands of tusks, exceptional ivory objects, bronzes and other religious and ceremonial items, after which the city was burned. Many of the objects taken were from the royal palace where they had served as a record of royal history. The British justified the takings and the destruction as retaliation for the deaths of British officers, payment of the cost of the expedition, and retributive justice for the many human sacrifices of slaves made by the Benin elite. When the looted artifacts arrived in England about 40% of them were accessioned by the British Museum. Most of the remainder were sold at auction to European museums, where appreciation for Benin’s 500-year-old bronze-making tradition would be important to the growing respect and appreciation for African art in the early 20th century. (The so-called ‘Benin bronze’ items are not actually bronze, but an amalgam more closely resembling brass.)

Approximately 30 bronze plaques were returned or sold as ‘duplicates’ to the Nigerian government by the British Museum between 1950 and 1972. Some of these later disappeared from government custody and appeared on the international market. Since the 1990s, however, public consciousness of the importance of cultural heritage has greatly increased in Nigeria and the taking of the Benin bronzes has become an international issue comparable to that of the Elgin Marbles. While their foreign ownership is lawful under international law, it is considered morally unacceptable by many.

Nigeria was under British colonial rule in the years that followed until gaining independence in 1960. Consciousness of cultural heritage in the Nigerian government was slow to develop. Historically, the Nigerian government has prioritized first agriculture and then crude oil development; it has done comparatively little in the cultural sphere. A 1953 Antiquities Commission and Federal Department of Antiquities was tasked with establishing a museum in each of Nigeria’s states, but these plans never came  to fruition. Antique and ancient objects could be exported with written permission, which was readily obtained.

In the decade following its independence, however, despite civil unrest, Nigeria began work on a national museum. In 1973, acting through the International Council of Museums (ICOM), Nigeria requested that foreign museums holding Benin collections return some of their Benin items to represent the nation’s cultural heritage – Nigeria only possessed about fifty bronzes and other objects from 19th century Benin at the time. Given the instability in the country, this request was met with silence – in part because Nigeria did not achieve stable governance until 1999. But the question lingered, “How does Nigeria regain its cultural heritage?”

The Benin Dialogue Group, a multi-lateral working group of museum representatives from Austria, Germany, the Netherlands, Sweden, and the United Kingdom, have quietly collaborated for over a decade with representatives of the Edo State Government, the Royal Court of Benin, and the National Commission for Museums and Monuments, Nigeria (NCMM). Under the 1979 NCMM Act, the NCMM administers Nigeria’s national “museums of unity”, maintains 50 outlets across the country, authorizes archaeological excavations, supervises monuments, and is tasked with cataloging Nigeria’s movable cultural heritage.

The aim of the Benin Dialog Group has been to find a practicable, logical and mutually supportive path toward establishing “a new Royal Museum to reunite in Benin City the most significant of Benin’s historical artefacts, currently in various locations around the world.” The project is a challenging one considering the complexities of national laws that regulate the deaccessioning of objects held in museum collections in the participating countries. Many of the museums with large collections from Benin, such as the British Museum, have agreed to long term loans, but the Nigerian partners have made clear that long term loans alone are inadequate to meet Nigeria’s needs. (In the case of the British Museum, due to the structure of its trust, it does not have the legal right to simply repatriate objects in its collection.)

In 2018 the Benin Dialog Group pledged its support for development of a Benin museum under the guidance of a steering committee comprised of Nigerian organizations and three of the eight European Museums; the Ethnologisches Museum, Berlin, the British Museum in London and the Museum am Rothenbaum, Kulturen und Künste der Welt (MARKK) in Hamburg (formerly the Museum für Völkerkunde Hamburg). 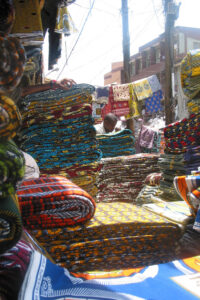 This support for museum development included a commitment to provide advice, “as requested, in areas including building and exhibition design,” and that “European and Nigerian partners [would] work collaboratively to develop training, funding, and legal frameworks to facilitate the permanent display of Benin works of art in the new museum,” said a statement from the 2018 meeting.

The sixth meeting of the Benin Dialogue Group, held in July 2019 in Benin City at the invitation of Godwin Nogheghase Obaseki, the Governor of Edo, built on these intentions. The Edo State Government discussed its plan to “create a museum trust that would be responsible for the planned Museum, its operation and be a custodian for the collection.” Governor Obaseki invited award winning Ghanaian-British architect Sir David Adjaye to lead a discussion “concerning the architectural vision for the museum in Benin City.” Two months later, a spokesperson for Adjaye’s architectural firm confirmed to artnet News “that the Edo state government has commissioned Adjaye Associates and its local partner in Nigeria, Agram Architects, to undertake [a] feasibility study” for a new Benin Royal Museum in Nigeria. The museum will be known as the Edo Museum of West African Art (EMOWAA).

The British Museum’s Director, Hartwig Fischer, met with Oba Ewuare II regarding the Benin project in 2019. He had previously met with him in 2018 where, “the Oba talked about the value of having objects both in Benin City — allowing an African audience to engage with their cultural heritage — and in museums across the world to act as “cultural ambassadors”, to highlight Benin’s contribution to culture in a global context.” An expanded vision that included incorporating the archeology of the museum site into the architecture of the museum and grounds grew out of these discussions. Fischer described that:

“In the course of visits to Benin City by British Museum staff in both 2018 and 2019, the architect and a range of people across the city communicated the desire for new ways of thinking and learning about Benin’s past, and archaeology is seen as a central means of undertaking this new exploration. The British Museum intends to partner on such projects working together with Nigerian colleagues to explore Benin’s early history and in so doing to engage in new dialogues concerning the African and global past.”

Using archeology to define a museum

On November 13, 2020, the British Museum announced that it was working in collaboration with Adjaye Associates and the Legacy Restoration Trust – another initiative to come out of the 2019 Benin meeting – on a five-year archeology project:

“This innovative project will investigate the archaeology of the Kingdom of Benin, including excavating historical remains of the capital buried below the proposed site of a new museum.” 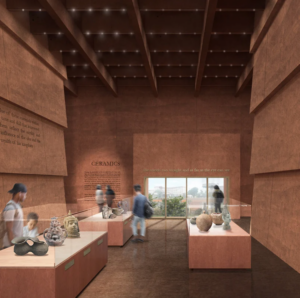 Slated to begin sometime in 2021, the archeology project is part of the ‘Rediscovering the History of Benin’ initiative launched in Benin City, Nigeria in conjunction with the British Museum announcement.

Although Adjaye Associates has already released initial drawings of the Edo Museum of West African Art concept, the archeological discoveries will inform the final architecture and its relationship to the surrounding area.

According to Philip Stevens, In a November 13, 2020 designboom article, david adjaye plans the new edo museum of west african art in nigeria, “The architectural vision… is to use archaeology as a means of connecting the new museum into the surrounding landscape.” Stevens continued, “The designs will revitalise and incorporate the surviving remains of the walls, moats and gates of the historic city, seen throughout the city today, including through a pedestrianising scheme and linear park that allows visitors to experience the history of the ancient city.”

The British Museum describes the museum as “part of a wider scheme to revitalize the cultural core of Benin City and to aid in its economic revitalization.” The British Museum also believes that the archeological project will provide important “local employment and training opportunities.”

Governor Godwin Obaseki, frequently credited as the driving force behind the Edo Museum of West African Art and its affiliate research, cultural, and contemporary art center, said, “Benin city is an ancient city with an incredible richness of artifacts and ruins that could and should form the bedrock of a center for research, education in archaeology, art, curation and preservation.”

In addition to the archeology informing the architecture, objects discovered during the dig will become part of the EMOWAA’s collection, and will contribute to the historical knowledge of the Kingdom of Benin.

All the discoveries anticipated from the archeology, as well as other “objects, photographs, oral histories, and other documentation associated with the Kingdom of Benin from collections worldwide” will be brought together on a single digital platform through ‘Digital Benin’, one of the projects of the Legacy Restoration Trust.

The Legacy Restoration Trust (LRT) “is an independent, not-for-profit entity incorporated in Nigeria to support cultural heritage art and archaeological projects by providing research, attract funding and secure execution capability for high-value arts and cultural projects.” It was born out of the Edo State Government’s plan to “create a museum trust that would be responsible for the planned Museum, its operation and be a custodian for the collection,” that was discussed at the 2019 meeting of the Benin Dialogue group. 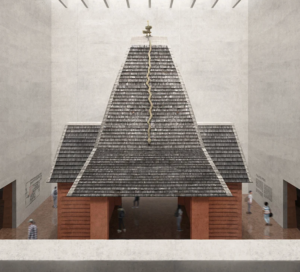 As stated on LRT’s website, “A core part of LRT’s approach is the provision of an institutional framework with appropriate governance structures to attract and oversee both local and international technical and financial support for key cultural heritage projects.”  The development of this framework has already begun with the organization of a team of Nigerian, African, and other international experts with backgrounds in museum development, investment, architecture, and Benin cultural heritage.

“As part of the Benin Project, LRT shall be responsible for attracting funding for the landmark museum/institute, which LRT will oversee the management of post completion.” In partnership with the British Museum, the trust has already secured over £3 million to fund the archeology project connected with the Edo Museum of West African Art.

In addition to assisting with the development of the Edo Museum of West African Art, LRT is providing a “local co-ordinating role” for Digital Benin “with a view to supporting local research and infrastructural requirements of the project.”

In April 2020 the Museum am Rothenbaum (MARKK) in Hamburg, part of the steering committee of the Benin Dialogue Group, announced that it would be “opening an international project office to digitally unite the globally dispersed works of art from the former Kingdom of Benin.” The launch of the Digital Benin website is planned for 2022 and is made possible by the generous support of over 1.2 million euros from the Ernst von Siemens Kunststiftung.