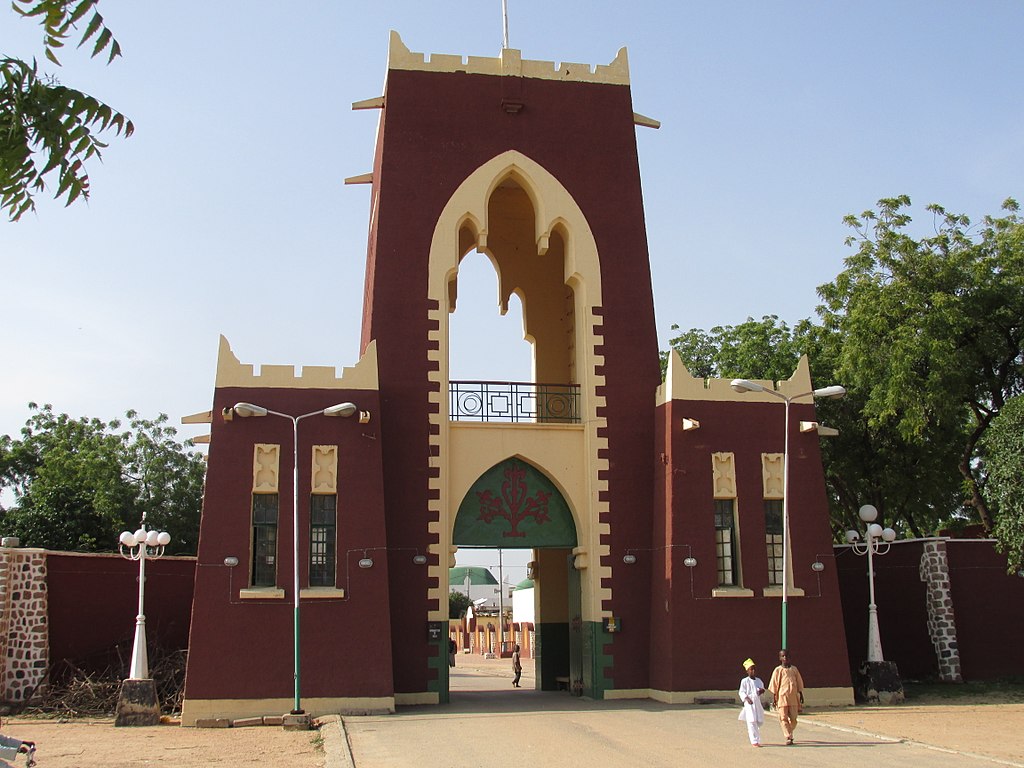 Today, Kano is the second largest city in Nigeria, a nation in which the majority of the population lives in extreme poverty, despite the country being the sixth largest oil producer in the world.

The ancient earthen wall surrounding the old city of Kano is one of the best known world heritage sites in sub-Saharan Africa.  It was once described by invading British forces as “‘the most impressive monument in West Africa.” 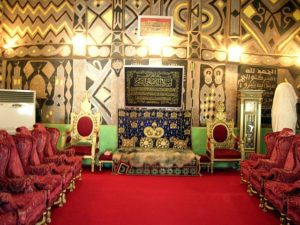 Inside the reception room, Palace of the Emir of Kano, Photo Shiraz Chakera. Wikimedia Commons

However, heritage officials estimate that only twenty percent of the wall now remains intact.

The Kano wall is gradually being absorbed into other structures or demolished as a result of a growing population’s need for land. Pieces of the wall are also hacked out for building materials, and once weakened, the ancient structure crumbles.

The Nigerian government has not provided funding to secure the remaining ancient walls, and it is not clear that even generous funding for preservation would reverse past neglect for the wall or for other Nigerian cultural heritage sites.

Despite the wall’s inclusion on the tentative list of UNESCO World Heritage sites, and efforts by local conservationists and historians to bring its plight to the attention of the Nigerian government, other issues take priority. While the rich grow much richer on oil and international commerce, the majority of Nigerians must strive to preserve themselves from destitution, and political conflict and terrorist violence continue to destabilize the nation. Nigeria had the highest number of people living in extreme poverty in the world – northern Nigeria is currently experiencing a resurgence of terrorist activity by the Islamic extremist group Boko Haram.

Kano: Once an Economic Powerhouse Built on Slaves and Gold 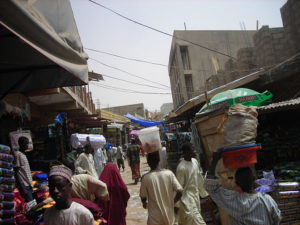 From the 8th through the 17th centuries, Kano was an important city along the trans-Saharan trade routes and a major market for gold and African slaves. Goods also flowed from North Africa and Europe across the Sahara Desert. The trade’s economic hub was Kano city’s Kurmi Market, founded in the 15th century.

Construction of the defensive Kano city wall began during the reign of Sakri Gijimasu (1095 – 1134), the third king of Kano. Much of the wall’s Maghrebi, North African style dates to a period of high Islamic cultural life in Kano in the 15-16th centuries. The city of Kano was also known as a center of Islamic education and culture, with mosques, schools and libraries.

Initial completion of a surrounding wall for the city took place during the 14th century reign of King Zamnagawa. In the 16th century the massive wall was further expanded to its maximum circumference of nine miles.

The ancient Kano wall was constructed from laterite, a reddish clayey material that hardens when dry. The iron and aluminum oxide in the rich mix of soil and rock give the walls their distinctive red color.

The walls formed a formidable defense: they measured close to 50 feet high and 39 feet wide and were topped with a rampart walk. Trenches in front of the wall further protected the city. Thirteen gates controlled the flow of people in and out of historic Kano. 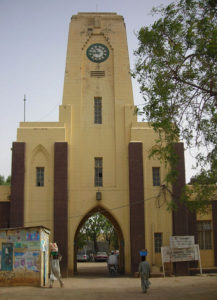 The municipal council gate and clock tower in the city of Kano, Nigeria. Photo by Jonathan Riddell jr@jriddell.org. Wikimedia Commons

When British forces took Kano in 1903, the African explorer and then General-Governor of the Colony and Protectorate of Nigeria, Fredrick Lugard, reported of the Kano Walls that he had “never seen anything like it in Africa.”

Today, Kano has outgrown the confines of the ancient mud walls; these are gradually being demolished to make way for new roads and buildings. The wall’s red laterite material is dug out and hauled away on the backs of donkeys and used by locals for construction material. The parts of the walls left exposed then disintegrate in the rain, leaving piles of reddish rubble.

“If you look at the city wall generally, almost 80 percent of it has been destroyed,” Mustapha Bachaka, curator of the Gidan Makama Museum in Kano,  told AFP.

He continued: “It is an irony that while we are making efforts to put Kano walls on the World Heritage map, people have turned them into pit latrines.”

“The government is giving out land around the city wall to political supporters to compensate them for their support,” he said and also pointed out that this makes it difficult for the Kano state government to enforce protection of the walls from other encroachment and destruction.

Ibrahim Muazu, the state’s executive secretary of the history and culture bureau thinks differently. He told Al Jazeera journalist Hamza Mohamed, “The government, to the best of its ability, has tried to maintain the wall. There is a lot of encroachment… We have reported and in many cases prosecuted people.” 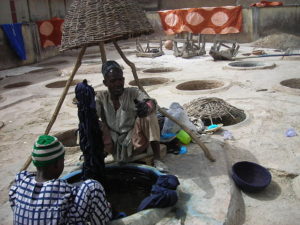 Two gates out of the thirteen have been repaired and repainted in prior attempts at restoration, but restoration efforts are not a priority for the government at this time. Some have said that only grassroots local efforts will protect the wall. Conservationists believe that educating young people about Kano’s walls’ historic value is the most important step to take in order to preserve them from loss due to government inaction.

In a community review of the Ancient Kano City Walls and Associated Sites on the World Heritage Site website Aliya Abdu defends the preservation of the ancient walls: “Though seriously encroached, Kano city wall still remains an intriguing testimony of African indigenous use of its architecture to define political space, defense and security system, labor organization and management, etc.”

The situation in Kano is just one example of the complexity of preserving historic and cultural monuments in Nigeria. Besides the Kano wall, there are other sites on UNESCO’s Nigerian tentative list of World Heritage sites that are threatened by neglect or are not locally appreciated for their connection to the nation’s cultural heritage. One of the most intriguing examples are the Alok Ikom Stone Monoliths, a collection of over 300 oblong carved stone figures arranged in circles in over thirty different communities in Nigeria. They are currently on the World Monuments Fund’s (WMF) list of sites at risk due to threats from “erosion, exposure to heavy rainfall and extreme heat and sun, biological attack caused by high humidity, damage from falling trees, theft, and vandalism.” Additionally, “local agricultural practices such as brush burning also threaten the stones.”

The WMF states that , “While many members of the local, regional, and federal governments recognize the importance of conserving the monoliths, efforts to preserve them have been thwarted by limited resources.” Other sources suggest that the surrounding communities “do not commonly see their worth as tourist attractions.” Nigerian site preservation therefore faces additional challenges because basic economic needs take precedence over work for the future that could monetize cultural heritage through tourism. 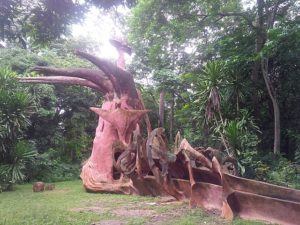 What is most striking about both the tentative list and designated list is that they primarily include sites with links to Nigerian pre-colonial and pre-Islamic animist sites and traditions, many of which still resonate within a living tradition. For example, the river that flows through the Osun-Osogbo Sacred Grove is considered to be the spiritual abode of the river goddess Osun, a deity of the Yoruba people. Shrines and art dedicated to other Yoruba deities also populate the grove, some with designated priests or priestesses who conduct the ceremonies of the various deities. These shrines and sculptures, which continue to be created and renewed, attest to the relevance of the natural heritage sites to the Nigerian people today.

As the name suggests, the Arochkwu Long Juju Slave Route (Cave Temple Complex) was actually part of the slave trading system in Nigeria. The site includes the main oracular shrine of Ibn Ukpabi whose prophecies and judgments can be heard through the voice of the waterfall in the cave. According to a statement from the Government of Nigeria when the site was included in the UNESCO tentative list: “The Aros [a subgroup of the Igbo people], centered around Arochukwu were able to manipulate their central oracle, Ibn Ukpabi (Long – Juju) in such a way, that it became the judicial machinery in every Igbo community. Trusting in the efficacy of the oracle, people in dispute went to settle their scores. The guilty victims became a property of the gods. They were eventually sold as slaves or retained as domestic property of the Arb Priest.”

Of the fourteen sites on either UNESCO’s tentative list or the designated World Heritage site list in Nigeria, over half have some connection to animist tradition. Despite longstanding Muslim and Christian influence, the over 250 main tribal groups within Nigeria’s current borders have traditionally found ways to perpetuate tribal traditions within contemporary society. These traditions often have animist characteristics, with a connection to the deities that reside in nature.

In addition to the Kano city walls and its associated sites of Dala Hills, Kurmi Market and the Emir’s Palace and the Alok Ikom Stone Monoliths Nigeria has 10 other sites on UNESCO’s World Heritage tentative list: 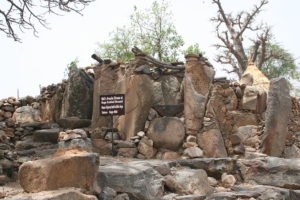 Because World Heritage sites incorporate natural or human made environments, or a combination of both, a portion of the tentative list captures the Nigerian natural environment of rainforests, mangroves and savannahs as well as rock and cave formations.

To be designated on the UNESCO World Heritage list a site must first be submitted by the country to the tentative list.  Then, according to the UNESCO website, “to be included on the World Heritage List, sites must be of outstanding universal value and meet at least one out of ten selection criteria.”

Selection criteria: (i) to represent a masterpiece of human creative genius;

(ii) to exhibit an important interchange of human values, over a span of time or within a cultural area of the world, on developments in architecture or technology, monumental arts, town-planning or landscape design;

(iii) to bear a unique or at least exceptional testimony to a cultural tradition or to a civilization which is living or which has disappeared;

(iv) to be an outstanding example of a type of building, architectural or technological ensemble or landscape which illustrates (a) significant stage(s) in human history;

(v) to be an outstanding example of a traditional human settlement, land-use, or sea-use which is representative of a culture (or cultures), or human interaction with the environment especially when it has become vulnerable under the impact of irreversible change; 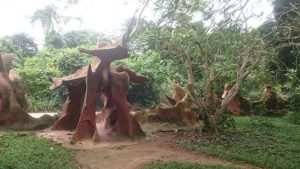 The Osun-Osogbo Grove is among the last of the sacred forests which usually adjoined the edges of most Yoruba cities before extensive urbanization. In recognition of its global significance and its cultural value, the Sacred Grove was inscribed as a UNESCO World Heritage Site in 2005. Photo by Profgkay, September 12, 2016
. Wikimedia Commons

(vi) to be directly or tangibly associated with events or living traditions, with ideas, or with beliefs, with artistic and literary works of outstanding universal significance. (The Committee considers that this criterion should preferably be used in conjunction with other criteria);

(viii) to be outstanding examples representing major stages of earth’s history, including the record of life, significant on-going geological processes in the development of landforms, or significant geomorphic or physiographic features;

(ix) to be outstanding examples representing significant on-going ecological and biological processes in the evolution and development of terrestrial, fresh water, coastal and marine ecosystems and communities of plants and animals;

(x) to contain the most important and significant natural habitats for in-situ conservation of biological diversity, including those containing threatened species of outstanding universal value from the point of view of science or conservation.