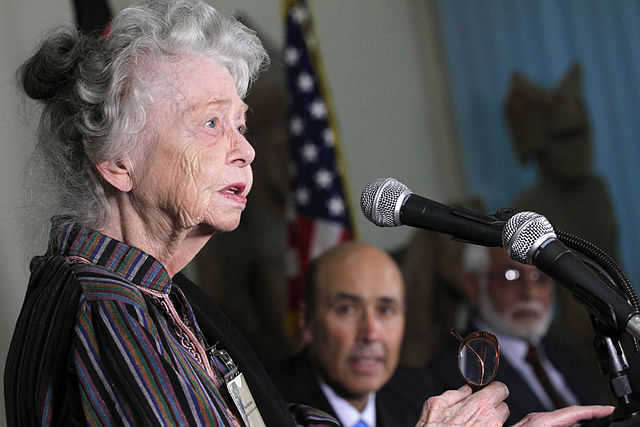 American writer and historian of Afghanistan Nancy Hatch Dupree died in Kabul on September 10, 2017, after complications from an injured leg and failing heart and lungs. She was nearly ninety years old. Nancy and her archaeologist-husband, Louis Dupree were witnesses to the transformation of Afghanistan from the post-war modernization of the central government to the “all in the family” coup d’etat in 1973 that made his cousin, Mohammad Daoud the first President of Afghanistan to the Soviet backed puppets, Nur Mohammad Taraki (1978) and Hafizullah Amin (1978 – 1979).

The Duprees left their home is Kabul only after Louis was arrested in 1978 after being accused of being an American spy. From then on, they lived part time in the US and part time just over the border from Afghanistan in Peshawar, Pakistan. Nancy became an activist in the swelling refugee community, working to recover documentary materials and art flowing out of the country during the years of the Soviet invasion and mujahedin resistance.

Nancy returned to Pakistan after Louis died in 1989 and, as soon as it was possible, to Afghanistan, in order to work on her primary goal, the creation of an historical, cultural, and archaeological archive for the nation. In so doing, she was single-minded, determined, stubborn and sometimes difficult – but she long outlived the opponents who forced her from Afghanistan, and the archives she helped to found are a true achievement not just for her, but for the nation of Afghanistan.

Advocate for a Practical Approach to Heritage Management

Nancy Dupree’s in-depth understanding of Afghanistan and its people left her free from some of the prejudices of archaeologists and cultural theorists who live in an idealized, fantasy world where making laws on paper actually effects local conditions. She understood that involving local communities in protecting monuments was the only way to be successful. She advocated for broad public education, especially in rural districts, as the key to community-based heritage preservation.

While living in the refugee community of Peshawar, Nancy Dupree was a founder of the Society for the Preservation of Afghanistan’s Cultural Heritage (SPACH), and when she returned to Afghanistan, she traveled all over the country to build support for the preservation of Afghanistan’s history. Finding international safe harbor for artifacts became a popular idea globally in response to the destruction that decades of war had caused to Afghanistan, but Dupree found UNESCO impossible to work with.

In an interview with Alexis Menten of AsiaSource in 2002, she said:

“UNESCO has a tendency to talk way up in the air. They are not specific about what regulations should apply. Many legal issues must be considered about collecting and returning items. If you buy a piece in Pakistan, for instance, you can’t take it outside the border because of Pakistani law. And if they confiscate it, it belongs to Pakistan. So there are all kinds of legal arrangements that have to be made before you can retrieve items from dealers and collectors. It’s not just talk, it takes a lot of hard work.”

“The whole question of who owns the national heritage of a country, and who is responsible for it, is very difficult. When the mujahideen were in power in Kabul, I personally talked to Commander Ahmed Shah Massoud (who was unfortunately later assassinated). I said, “Look, the museum collections are in danger. Is there any chance you would consider sending them out of the country to be held in some safe haven?” And he said, “Personally I think it would be a good idea to put them in some safe haven, but politically I cannot do this. My opponents would say I am selling away the artifacts for my own personal gain.”

There were some, like the then-director of the Kabul Museum, who desperately wanted to get these things away from the battle for Kabul. But when it comes down to realities, which very often have to do more with politics than anything else, it is just not possible…
I think that a country is entitled to keep its heritage. But, at the same time, in keeping their heritage they have the responsibility to protect it. This is not always possible. And Afghanistan is not the only place where this has happened; look at what has happened in Cambodia, what has happened in South American countries, and so on and so forth. It is not an easy question. It can only be solved with a lot of complex negotiations.”

She also acknowledged both the good faith and the limitations of the art dealer and collector community in giving artifacts safe harbor:

“The collectors and the dealers grabbed on to that very quickly. They’re very proud of themselves, saying, “See, now we’ve served a very good purpose!” The problem is, where are these artifacts?”

“There are one or two very generous dealers who have donated pieces to SPACH to hold until they can be returned to Afghanistan.* There is a case in Tokyo that goes even further: a dealer has actually put a superb piece on exhibit in the Ancient Orient Museum in Tokyo. He has expressed the hope that other dealers or collectors will follow his example, and put their pieces on exhibit so the people of Japan can enjoy them until such time as it is safe to send them back to Afghanistan. I don’t know if anybody has followed up on his suggestion. I do know there is a professor at the University of Tokyo who says he has thirty objects from Afghanistan that have been collected or donated by generous public-spirited citizens in Japan. He is holding these pieces until the Kabul Museum is reestablished and they can be returned.”

First and foremost, however, Nancy Dupree was a tireless advocate for building knowledge within Afghanistan and for assisting in the development of an academic and research community that would carry on historical, anthropological, social, and political scholarship on Afghanistan by the Afghans themselves.

Nancy Hatch was born in Cooperstown, N.Y. in 1927 and was raised in India. Her parents were both deeply involved in Asian culture and Nancy Hatch herself received a master’s degree in Chinese art from Columbia University. She first arrived in Afghanistan in 1962 as the wife of a diplomat, falling in love with both the culture  – and later, with archaeologist and anthropologist Louis Dupree. Her husband at the time fell in love with Louis Dupree’s then wife, and the “switch” that took place when the couples were living in tents on site became a part of Afghan legends about the strange habits of these exotic foreigners.

The Duprees were well-matched; dedicated researchers, diligent and prolific writers in the then-obscure field of Afghanistan archaeology, and inveterate party-goers. Together, they excavated and documented Afghanistan’s early archaeology, researched Afghanistan’s incredibly diverse cultures, and collected books, maps, photographs, artifacts and recordings of folk music. They also held Thursday-night cocktail parties in their home to which anyone could come; these were an exceptional gathering place for Afghan politicians, academics, and students, diplomats from all nations, US Peace Corps volunteers, and the more permanent of the non-diplomatic US residents of Kabul. (The communist leaders who eventually arrested Louis, tortured his Afghan friends, and threw the Duprees out of Afghanistan, were exactly the people who attended the Dupree’s parties before they came to power.)

My husband and I first met the Duprees at just such a party, where I remember asking them a serious question about identifying pottery shards and Nancy replied that she would touch it, rub it, smell it and taste it – an unorthodox answer but quite a sensible one. My husband had found the earliest surviving movies made in Afghanistan, essentially ‘home movies’ made by someone in the family of Amanullah Khan, King of Afghanistan from 1924-1929 – on a pushcart stacked with brick-a-brac from the palace. The Hazara pulling the cart was a hard bargainer, and my husband only had enough afghanis to buy half of the reels. We worked with the Duprees to copy the old films for the archives, for some obscure reason to hide their Land Rover in our yard when Louis was arrested, and helped to organize their household things for a sort of garage sale when they had to leave Kabul, they thought, for good.

Nancy Dupree had been known mostly for her guidebooks. According to a New York Times article by Celestine Bohlen in 2002, she first began writing “in response to a challenge put to her at a Kabul cocktail party in the early 1960’s. She had just been to the distant Bamiyan Valley on an official trip to see the Buddhas, then still safe in their giant niches. When asked by a government minister for her impressions, she gave him an honest reply. ”I said it was a scandal that there were no two-legged guides, nothing written anywhere,” she recalled,”and he said, ‘Why don’t you do something about it?’ ”

In addition to a guidebook about the Bamiyan Buddhas in 1969, she wrote four other books; one about Kabul, another about Herat and the northern area, as well as a guide to the National Museum of Kabul and finally a historical guide to Afghanistan. Her guide to the Kabul Museum, a tiny volume printed with grainy photos, became an irreplaceable resource when the Taliban smashed many of the museum’s contents with sledgehammers.

When Ms. Dupree was forced to leave the country during the 1979 Soviet invasion of Afghanistan, she moved to a refugee camp in Peshawar to help Afghan refugees.  While she was there, she worked to preserve both government and non-government documents related to Afghanistan’s history and culture during the Soviet invasion.  These estimated 7,000 documents became the foundation for the Afghan Collection at Kabul University.

She frequently returned to Kabul to meet with the Taliban to try and secure protection for both the libraries and the cultural artifacts of Afghanistan, negotiations that often ended in heartbreak as yet another site or monument was destroyed.

According to Omara Khan Massoudi, the former director of Afghanistan’s National Museum, during the years (1996-2001) when the Taliban’s mission was to destroy cultural artifacts as un-Islamic, Ms. Dupree took active measures to help install 32 metal doors for the museum galleries to protect the surviving artifacts. Massoudi attributes the sentiment inscribed on a stone at the National Museum to her influence: “A nation stays alive if its culture stays alive.” In later years she frequently lamented the lack of cultural knowledge in the younger generation due to displacement in refugee camps from the years of war and occupation.

According to Majib Mashal of the New York Times, “Mrs. Dupree asked that her remains be buried on a Kabul hilltop, the Bagh-e-Bala, just down the steps from the restaurant where she and her husband married. His ashes are buried there under a simple monument.”

“He’s got such a fantastic view,” Mrs. Dupree used to tell friends.

Nancy Dupree with be much missed – beloved by her adopted country and an honorary “daughter of Afghanistan,” as the Afghanistan Center at Kabul University described her in a statement on her passing.

(*) These included some of the truly priceless, world famous, Begram ivories, stolen from the museum during the war and purchased in Pakistan for donation to SPACH by a UK art dealer.