MOU Backstory: How Cultural Property Agreements with Authoritarian Middle Eastern Governments are Made 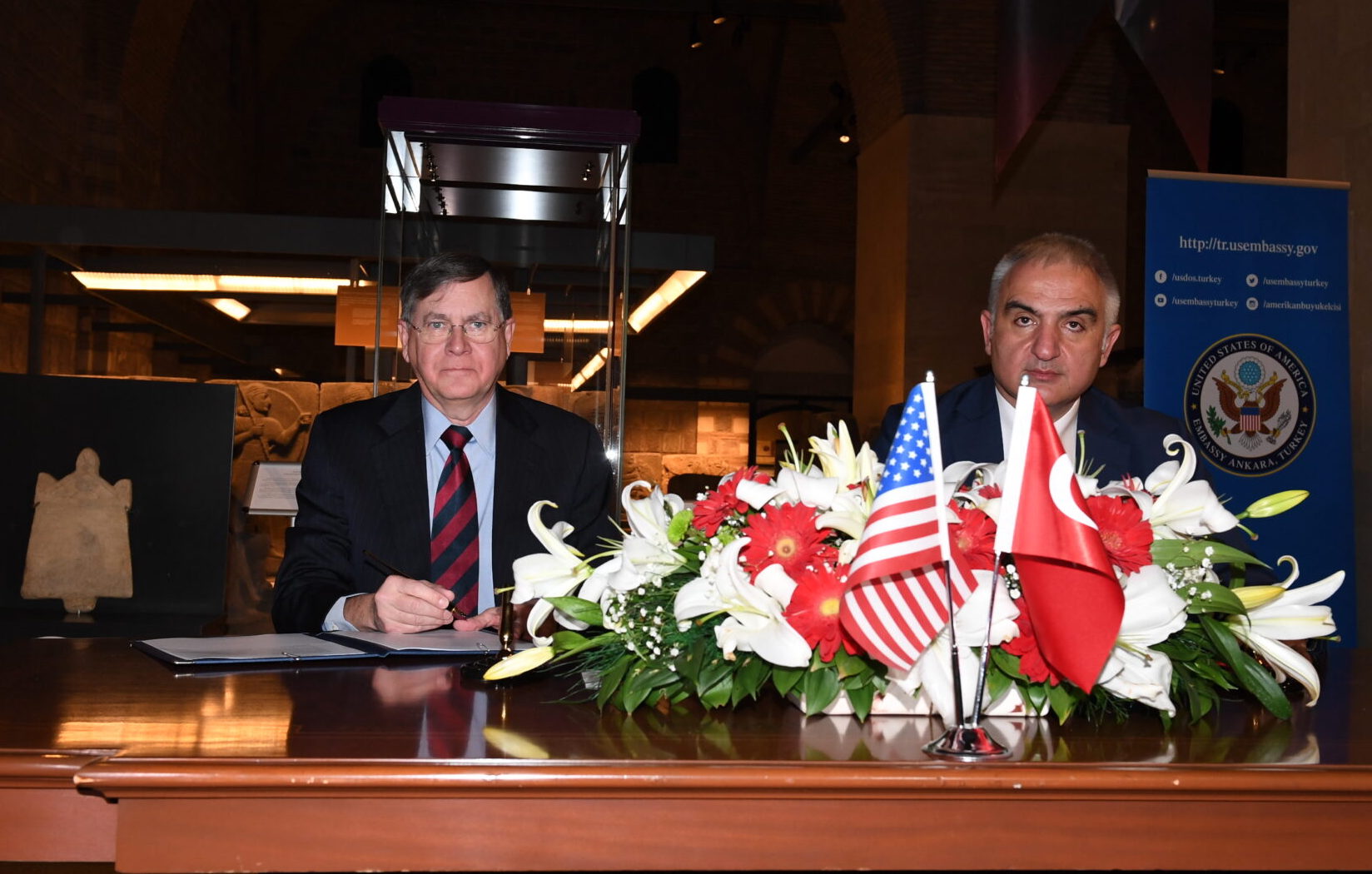 Cultural Property News expresses its thanks to author Peter K. Tompa and  Coins Weekly for enabling this article’s publication. 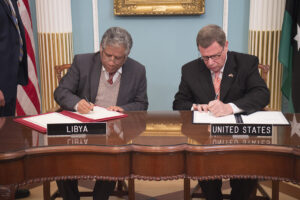 On February 23, Under Secretary of State for Public Diplomacy and Public Affairs I. Steven Goldstein and Libyan Ministry of Foreign Affairs Under Secretary for Political Affairs Lutfi Almughrabi sign a MOU on cultural property at  the U.S. Department of State’s Treaty Room. U.S. Government photo.

When the United States signed onto the 1970 UNESCO Convention, it only did so with reservations to preserve its “independent judgment” to determine whether and to what extent to enforce foreign export controls in the United States.  The Convention is not “self-executing,” so when Congress passed implementing legislation, the Convention on Cultural Property Implementation Act (CPIA) into law, it sought to ensure this “independent judgment” would be maintained by incorporating several procedural and substantive constraints on executive action.

These included the requirements that import restrictions can only apply to archaeological objects of “cultural significance,” “first discovered within” and “subject to export control by” a specific country, provisions that the country undertake “self-help” measures, that restrictions be part of a “concerted international response” of market nations, and that any restrictions “be consistent with the general interest of the international exchange of cultural property….”[1].   A Cultural Property Advisory Committee (CPAC) was also established to guide executive action. 19 U.S.C. § 2605.  Its composition includes two members representing museums, three members who are experts in archaeology, ethnology, or related areas, three experts in the international trade of cultural goods, and three members representing the interests of the public.[2] 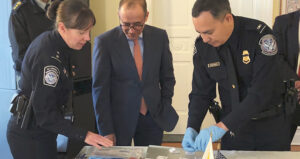 While the CPIA was being negotiated, one of the State Department’s top lawyers assured Congress that “it would be hard to imagine a case” where coins would be restricted.[3] In 2007, however, the State Department imposed import restrictions on Cypriot coins, against CPAC’s recommendations, and then misled the public and Congress about it in official government reports.  What also should be troubling is that the decision maker, Assistant Secretary Dina Powell, did so AFTER she had accepted a job with Goldman Sachs where she was recruited by and worked for the spouse of the founder of the Antiquities Coalition, a well-funded and politically connected archaeological advocacy group that has lobbied extensively for import restrictions.

Since that time, additional import restrictions have been imposed on coins from Algeria, Bulgaria, China, Egypt, Greece, Iraq, Italy, Jordan, Libya, Morocco, Syria, and Yemen.  Import restrictions remain pending for Tunisia and Turkey.  These import restrictions deeply concern coin collectors and the trade because they are applied not as prospective, focused restrictions on coins proven to be illicitly exported after the effective date of implementing regulations, but as embargoes of all coins of a similar type entering the United States from legitimate markets in Europe. 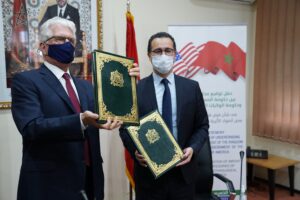 Import restrictions on behalf of authoritarian Middle Eastern and North African (MENA) governments have not only riled coin collectors, but representatives of displaced minority religious and ethnic groups.  Groups as diverse as the American Hellenic Institute (AHI), B’nai B’rith, Global Heritage Alliance, and Jews Indigenous to the Middle East and North Africa (JIMENA) have expressed deep concerns about cultural property agreements which recognize the rights of authoritarian MENA governments to the personal and community property of displaced religious and ethnic minorities.

Yet, despite concerns raised not only by coin collectors, but by far more politically active religious and ethnic minority groups, the State Department agreed to Memorandums of Understanding (MOUs) with the following MENA governments in quick succession: Egypt (2016); Libya (2017); Algeria (2019); Jordan (2020); Yemen (2020); Morocco (2021). and Turkey (2021).  Of these, only the agreement with Morocco contained some protections for minority Jewish cultural patrimony. 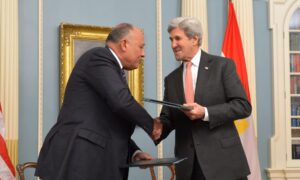 The backstory behind these MENA MOUs can be pieced together from the State Department’s own statements as well as blog posts and regulatory filings of the Antiquities Coalition.  The U.S. Embassy in Jordan has confirmed what many who have closely followed the process of creating MOU’s “protecting” cultural heritage already knew, i.e., that the process is orchestrated in advance by the State Department itself with the help of archaeological advocacy groups:

“The idea of holding an agreement to protect the Jordanian cultural heritage from smuggling had begun on the margins of the meeting of the second ministerial conference entitled “Heritage under Threat” which was held in Amman on September 8, 2016, and was organized by the Ministry of Foreign Affairs and Expatriates Affairs, the Ministry of Tourism and Antiquities, the Middle East Institute and the Archaeological Institute of America (AIA), where the cultural section of the Embassy of the United States of America in Amman expressed the desire of the United States of America to conclude a bilateral agreement with the Government of the Hashemite Kingdom of Jordan represented by the Department of Antiquities, with the aim of protecting Jordanian cultural heritage from smuggling.  Accordingly, many meetings were held with specialists from the US State Department, the US embassy, and from the Ministry of Foreign Affairs and the Department of Antiquities, during which the broad lines were agreed upon to prepare a memorandum of understanding on preventing the import of Jordanian artifacts and recovering the artifacts from the United States and returning them to Jordan.  Workshops, lectures, and visits were organized for experts from the United States of America to introduce international agreements on preventing the trafficking of antiquities and protecting cultural heritage.”[4] 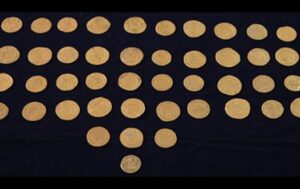 Press Release, Signing of the U.S.-Jordan Cultural Property Agreement, on a conference held at the U.S. Embassy in Jordan on December 17, 2019.

Oddly, although the Antiquities Coalition’s own website discusses its leading role in setting up this conference, the U.S. Embassy failed to acknowledge the advocacy group’s key role.[5]

“Bilateral Memoranda of Understanding, based on the 1970 UNESCO Convention on Cultural Property, are creating the foundation for long-term partnerships with governments in the NEA region. These MOUs authorize DHS’s Customs and Border Protection to seize undocumented cultural property. The first case in NEA was when Egypt committed resources to cultural heritage protection and signed an MOU with the U.S. in November of 2016. Following that, NEA provided funding to advise NEA countries in preparing their MOU request packages. ECA and NEA training and capacity building for Libyan archeologists and law enforcement personnel laid the groundwork for signing an MOU with Libya in February 2018. Post, the Libya External Office that’s based in Tunis, is now working with a Fulbright Specialist to support this effort. So, posts are looking at the whole toolkit of what they can do to bring these resources to bear and advance this cause.”[6] 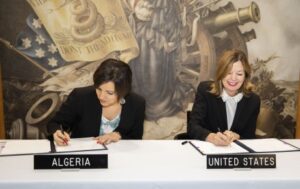 In addition, according to the Antiquities Coalition’s 2017 990 filing, this funding originated with the advocacy group which gave a grant of $60,000 to the State Department for these purposes.[7]

But what of the Cultural Property Advisory Committee?  Isn’t it their job to consider such requests on the merits?  Yes, but unfortunately, that group has been packed with those sympathetic to the interests of archaeological advocacy group for years, with only one of the three slots meant to represent the interests of the trade filled for much of the Obama and all the Trump Administration.

This information helps confirm why collectors, dealers, museums, and representatives of displaced religious and ethnic minorities are treated as outsiders to the process of imposing import restrictions on cultural goods. It also suggests there needs to be far more transparency about how import restrictions are processed. For example, information has also come to light that raises the question whether these advocacy efforts have been leveraged to benefit the Antiquities Coalition’s founder’s for-profit business interests.[8] 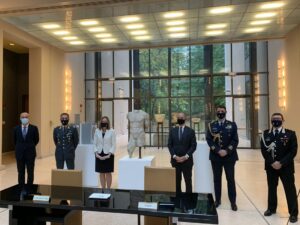 What is the solution?  Collectors must remain engaged and continue to make common cause with representatives of religious and ethnic minorities.  They have far better political contacts and find more sympathy for their message based on the injustice of the U.S. Government recognizing the rights of authoritarian governments over their victims.  In any case, it is also imperative that collectors continue also to make their concerns known to members of Congress and the executive branch, pointing out to be effective and just, any cultural policy must account for and show respect all interests, not just those of archaeological advocacy groups aligned with foreign cultural bureaucracies.

This article is based on several posts from the Cultural Property Observer blog.  For a related story, see Aninika Backe, Interrelations in the Protection of Cultural Property—The American Way, Coins Weekly (May 10, 2017)[9].

Attorney Peter K. Tompa serves as both the Ancient Coin Collectors Guild’s and the Global Heritage Alliance’s executive director. He practices law at his own firm in Washington, D.C.  He has appeared in numerous trial and appellate courts. He has lobbied members of the U.S. Congress and the Executive Branch in an effort to ensure that his small business clients receive fair treatment from federal regulators. His advocacy has received notice in the media, including the New York Times, the New Yorker, the Art Newspaper, CBS News and the Voice of America. He has written and lectured about cultural property issues. He is a contributor to K. Fitz Gibbon ed., “Who Owns the Past?” (Rutgers 2005). He also currently serves as a board member of the Committee for Cultural Policy and as co-chair of the American Bar Association’s Art & Cultural Heritage Law Committee. For more about the ACCG, see https://accguild.org/  and Global Heritage Alliance, see https://global-heritage.org/ 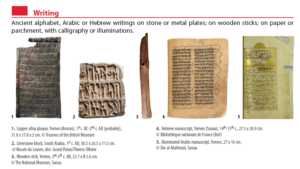 Illustrations from Yemen Emergency Red List. Credit ICOM and US Department of State.

[3] See “Cultural Property Treaty Legislation,” Hearing before the House Subcommittee on Trade of the Committee on Ways and Means, 96th Cong., 1st session on HR 3403. p. 8.