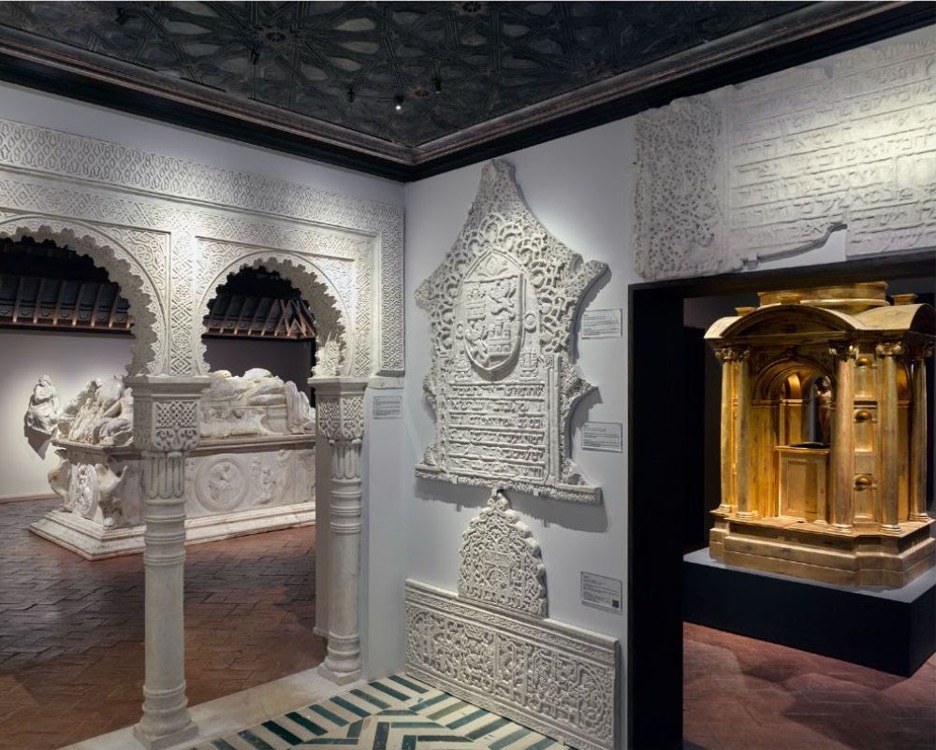 In Ictu Oculi – In the Blink of an Eye, Transience and Eternity in the Spanish Golden Age is a remarkable addition to the Spanish Gallery in Bishop Aukland in County Durham in northeast England. The exhibition by Factum Foundation and Skene Catling de la Peña brings true recreations of some of the greatest works of art from Spain. The exhibition includes a New World vellum map, paintings – portraits, a baptism and two vanitas, Renaissance wall tiles, carved architectural plasterwork or yesería, elaborate, geometric-patterned timber ceilings, sculptures, a tabernacle and a tomb. The original pieces were all chosen, digitally recorded and re-embodied as physical facsimiles. They were made in Madrid over a three year period by Factum Arte, which worked closely with eighteen major cultural institutions in Spain.

The exhibition is now installed on the top floor of the Spanish Gallery at Bishop Aukland, a market town in what was a distressed mining district. The exhibition is one element of The Aukland Project, the brainchild of Jonathan and Jane Ruffer. The Aukland Project’s goal is no less than to revive Bishop Aukland through the restoration of its castle and its large walled garden, the exhibition of its collection of twelve original paintings by Francisco de Zurbarán, Jacob and his Twelve Sons, and commissioning of remarkable, never-before-attempted projects such as In the Blink of an Eye. 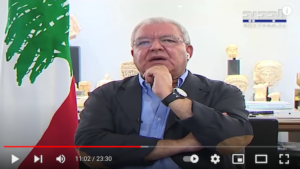 A scandal is brewing around Lebanese MP Nohad Machnouk’s video interview with al-Jadeed TV on 10 October, in which he spoke from his office.  Viewers could not help noticing that there were a number of Palmyran-style busts and small sculptures in the background.

Saad Fansa, a board member of El-Adiyat Association for the Protection of Antiquities in Damascus, said the items were stolen from the Palmyra Museum in 2014-2015.

Megaphone News contacted MP Nohad Machnouk to ask what ancient objects from Syria were doing in his office. His media office said that the objects “have been there for more than ten years, and they are registered at the Culture Ministry according to the standard laws, some of which ban their transport out of Lebanon, in order to protect them from trade.”

Megaphone News pointed out that the statement validated the antiquity of the pieces. It said the real question was not whether they could leave Lebanon but how they got into Lebanon in the first place.

“Trading in archeological relics from Syria has been illegal for more than ten years. If the relics were stolen from Syria after March 15, 2011, then they fall under the UN security council’s decision which calls for member states and the Interpol agency to return them to Syria. As such, the Culture Ministry would have registered stolen relics within its books. This does not exonerate Machnouk; it makes the Culture Ministry his accomplice.”

According to a report in Enab Baladi, Interpol has been informed and has asked the Syria’s Directorate-General for Antiquities and Museums (SDGAM) to supply  descriptions to determine where they originated; SDGAMsaid it does not have archives or inventory. 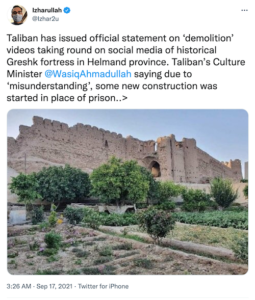 Twitter response to video of bulldozer knocking over top of wall. 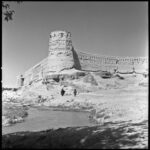 The Aga Khan Foundation’s Trust for Culture in Afghanistan has set up a web platform to collect information on potential dangers to Afghanistan’s cultural heritage. The Aga Khan Cultural Services will “log threats to sites of historical importance.” In announcing the website, the Aga Khan Trust explicitly recognized that threats to cultural sites may come from economic development, Taliban policy, continuing conflict and climate change. It emphasized “the importance of having unbiased and balanced information on cultural heritage.” Community members can submit information, which the Trust will attempt to verify before posting it.

According to the Trust website, the platform’s first inclusion was the site of Grishk, an 8th c. fortress on the road between Heart and Kandahar. On September 16th, social media showed a bulldozer knocking out part of a an upper wall on the fortress. The Taliban denied that the fort was being demolished, saying there had been a “misunderstanding” and only a prison was being demolished. However, the video clearly shows part of a wall being pushed over.

Twenty six artifacts, among them three large wooden royal statues from 19th century Abomey were displayed for the last time at the Musée du quai Branly–Jacques Chirac from the 26th to the 31st of October. They are being sent first to the Museum of History of Ouidah in Benin and will eventually be transferred to a new museum planned for the city of Abomey partially funded by the government of France.

The objects were taken by French forces led by Colonel Alfred-Amédée Dodds as war booty from the palace of King Béhanzin of Dahomey in November 1892. Made a general in 1893, Dodds donated these 26 objects to the musée d’ethnographie du Trocadéroin 1893 and 1895. In 2003 they were transferred to the musée du quai Branly–Jacques Chirac. The brief final exhibition is taking place in the context of meetings open to the public discussing the objects’ history, their conservation and the legal decisions to return them to Dahomey.  An international scientific conference and meeting in Benin to discuss their future display is also planned. The special events and final display were the outcome of the museum’s partnership with colleagues in Benin.

Arab News reported that a seizure of Egyptian objects in Afghanistan has prompted demands for investigation by Egypt’s Ministry of Tourism and Antiquities. A spokesman for Egypt’s Supreme Council of Antiquities said that “If the antiquities are proven to be authentic, the (Egyptian) Ministry of Foreign Affairs will communicate with the competent authorities to provide us with the documents of ownership of all Egyptian antiquities, to study them and determine whether they came out of Egypt legally or not.” 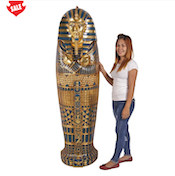 Example of popular reproduction of an Egyptian sarcophagus.

Although very occasionally, small objects of Mesopotamian origin such as cylinder seals have been found in Afghanistan, Egyptian antiquities are not found in there. Mawlawi Abdul Hanan Hamid, a regional liaison officer in Herat, Afghanistan, more sensibly said that the objects are fakes that people are trying to use to trick others out of money. Museum director Muhammad Fahim Rahimi confirmed that 3 coffins and 48 statues are fake, but that the arrested individuals also had some 11-12th c. objects (presumably from Afghanistan, where Islamic artifacts are common).

The story is reminiscent of a 2001 international fracas that resulted when Pakistani police in Karachi claimed to have seized the mummy of a Persian princess. The mummy was in the possession of two men from Quetta, who were attempting to sell it. Inscriptions and carvings appeared to stated that the mummy was the daughter of 5th C BC Achaemenid King Xerxes. The seizure prompted a diplomatic quarrel between Iran and Pakistan over ownership of the mummy. However, the mummy’s sarcophagus was shown to be inauthentic. The body was that of a woman. A CT scan showed she had died about 1996 from a broken neck. A murder investigation begun by Pakistani police was never resolved.