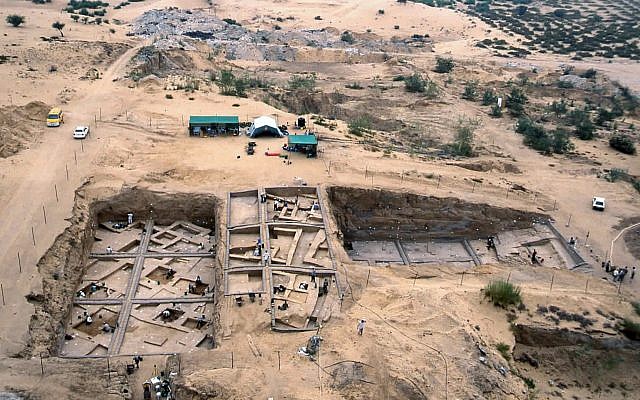 The oldest documented Egyptian walled city, Tell Es-Sakan, was found by accident in Gaza in 1988, during deep trenching for the foundations for several high-rise buildings. Construction was halted for archaeological teams to begin excavation. French and Palestinian archeologists Pierre de Miroschedji and Mouin Sadeq discovered the remnants of a Canaanite/Egyptian city that existed over 4,500 years ago – before the pharaohs came to power and 1,000 years prior to the pyramids. The find “profoundly changed [the] understanding of the relations between the Southern Levant and Egypt in the early periods.” reported archeologist Pierre de Miroschedji on The Palestine Exploration Fund website.

Tell Es-Sakan – the city’s name literally means “hill of ash” due to the amount of ash found in the excavations – was occupied in several phases. The first stage was clearly Egyptian, as evidenced by the abundance of Egyptian pottery found on site, and was possibly an outlier Egyptian colony in what was then the region of Levant.  When relations between Levant and Egypt changed, sometime at the beginning of the 3rd millennium BCE, Egypt abandoned the city.

Later in the 3rd millennium, Tell Es-Sakan became a Canaanite city-state. The site was strategically located at the waterway of Wadi Ghazzeh, at the point where it empties into the Mediterranean. The Canaanites transformed Tell Es-Sakan into a heavily fortified trade city at the juncture of Arabia, Egypt and Canaan. The city is thought to be the precursor of Tall al-Ajjul, a later Canaanite city in the same area where a large hoard of Bronze Age gold jewelry was found during excavations in the early 1930s. The Tall was most likely abandoned due to a shift in the flow of Wadi Ghazzeh.

The site’s contemporary history in bound up with current political conflicts. In 2002, the future of Tell Es-Sakan was in jeopardy as a result of fighting at the nearby settlement of Netzarim between Palestinians and Israelis. Excavation was halted due to security concerns and never resumed. In 2005, Israel withdrew from the Gaza strip.

The Islamist group Hamas gained political power and drove out the Palestinian Authority by 2007. Unlike other Middle Eastern sites, destroyed on ideological grounds, Tell Es-Sakan was subject to economic and administrative threats. Land is at a premium in the Gaza strip, so in the years since 2007, multiple archeological sites – ancient mosques, churches, temples, palaces, and mosaic remains – were commandeered for the development of military installations, universities, and housing. Despite its historical importance, and the amount of excavation still needed to reveal the details of its history, in 2009, Hamas also began to tear apart Tell Es-Sakan. This dismantling began with a university expansion that destroyed the site’s Western and Northern facades.

During the three wars between Hamas and Israel, displaced persons set up dwellings on the Eastern side, further destroying the ancient city. According to Fares Akram at the Associated Press, the deathblow came for the Southern side of Tell Es-Sakan when Hamas authorities gave the land as compensation to some of its senior employees who had only received partial salaries for their work due to Hamas’s lack of funds.

Bulldozers moved in, in early August, for the latest assault to the site. Archeologists, UNESCO representatives and Hamas’s own director of antiquities for the Ministry of Tourism and Antiquities, Aamal Abu Rida, expressed shock and confusion. The Tell is, at least on paper, a protected archeological site and this latest development means the complete destruction and the entire historical record lost to history. UNESCO representative Junaid Sorosh-Wali told the Associated Press that what happened was “disastrous for the archaeology and cultural heritage in Palestine.” The Land Authority was too powerful to challenge, and archeology takes a low priority

Other heritage sites in Gaza are under similar pressures. The remains of a Byzantine church, located in 2016, are said to have already been destroyed, and the site of the St. Hilarion monastery, where important mosaics remain, has been used as a dumping ground for nearby building construction.