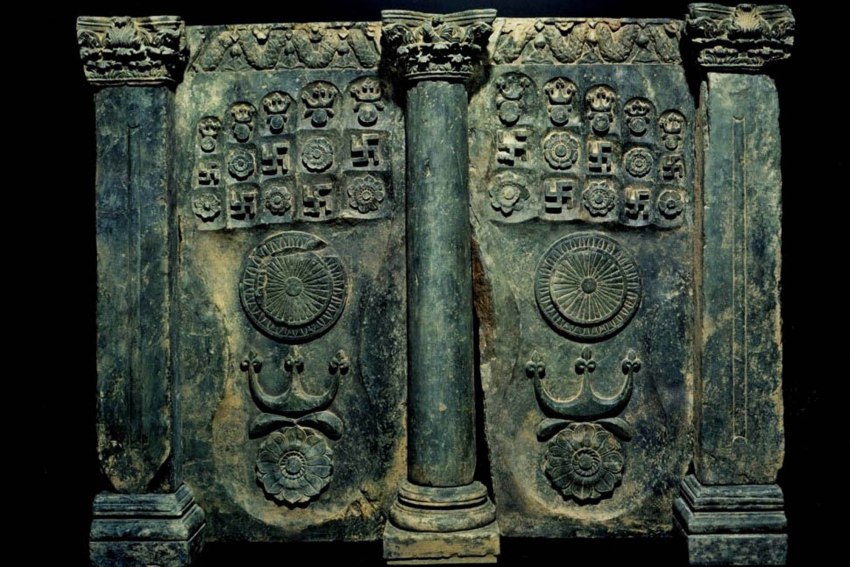 One of the most shocking episodes in the Asia Week 2016 series of seizures was the lightning-fast conviction of Japanese art dealer Tatsuzo Kaku under a plea agreement with the New York prosecutor, just one week after he was arrested.

The case against Mr. Kaku, age 71, took only eight days to pass through the court system. He was charged in New York on March 14 with criminal possession of a stolen artwork. He plead guilty and was sentenced to time served and a $5000 fine on March 22. The sculpture, valued at over a million dollars, will be returned to Pakistan. It was reported that Prosecutor Matthew Bogdanos told the court that Mr. Kaku was helping authorities with a larger investigation and that a lenient sentence was warranted. There is no indication, however, that Mr. Kaku had any connection with Subhash Kapoor.

The artwork in question was a second century stone “Buddhapada” depicting the footprints of the Buddha. (This symbolic rendering of the presence of Buddha, rather than a figural representation as a human being, was characteristic of the earlier period of Buddhist art.)

According to news reports, emails written by Mr. Kaku indicated that he believed the sculpture to have been “stolen,” although there was no indication the sculpture had been taken from any inventory, but rather that it was found in the ground somewhere in Pakistan. These emails appear to have been provided to the prosecutor by an informant within the art world.

Mr. Kaku told the court through a translator, “While I did stand to gain financially from the prospective sale of the Buddhapada, I was equally motivated by a life-long desire to preserve for posterity such works, which, if they were to remain in Pakistan, would, I believe, at best fall into disrepair and at worst be destroyed.”

One circumstance that makes this case of interest is the difference in the application of law in the US and in Japan. The multiple prior sales and re-sales of the artwork in Japan by Mr. Kaku appear to have been quite legal under Japan’s Law Concerning Controls on the Illicit Export and Import of Cultural Property.

Mr. Kaku did not violate Japanese law when he first sold the sculpture in Japan, nor when he repurchased and sold it to a London collector, nor when he received it on consignment from a collector to take it to Asia Week in New York.

The Japanese cultural property law, which did not come into force until 2002 and which is not retroactive, states that claims for recovery of cultural property, even cultural property actually stolen from an institution, may be made only before two years have elapsed from import and within a total period of ten years from the time of the theft.

A U.S. prosecution could also have proved problematic for the government.  Mr. Kaku’s emails stated that he purchased the statue directly from smugglers in 1982 and that he believed it to come from the Swat Valley of Pakistan. According to investigators, Mr. Kaku acknowledged that he knew it was illegal to purchase and export such materials from Pakistan at the time.

Pakistan’s 1975 Antiquities Act makes export unlawful, but the U.S. does not traditionally enforce foreign export laws. The provision vesting ownership in the Federal Government of Pakistan (§13A), which would form the U.S. legal justification for deeming an artifact found in the ground to belong to the government of Pakistan, and therefore to be “stolen”, was not added until 1992. Thus, it appears that the Pakistan law which Mr. Kaku was accused of violating was an export law, not a vesting law, which ordinarily would not make unlawful export from Pakistan at that time a chargeable offense in the U.S.

Nor would a claim made under the Cultural Property Implementation Act of 1983 have been valid, the sculpture having been more than 30 years outside of the country of origin, and Pakistan never having sought an agreement with the U.S. under that statute.

Note: By the mid-1970s, a high proportion of the Gandharan art in Pakistan’s derelict museums had already been replaced by copies, the originals having been sold to Western buyers. The early 1980s, however, were the heyday of the Japanese buyer in Pakistan and several notable collections of Gandharan art in Japan were formed at that time. Japanese buyers were thought to be so eager for artifacts that tour groups intent on visiting the Swat Valley’s many ancient Buddhist sites were constantly pestered, even chased, by sellers offering Buddhist artifacts.