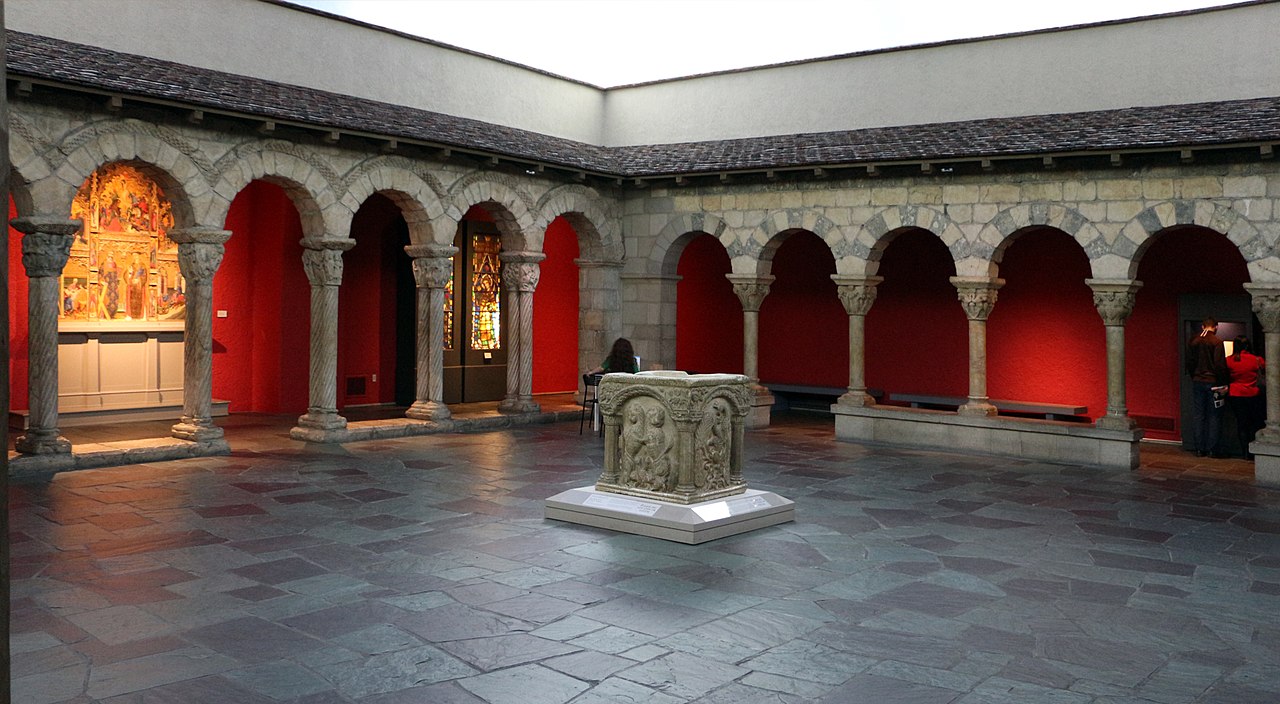 Toledo Museum of Art, By Sailko (Own work) [CC BY 3.0 (http://creativecommons.org/licenses/by/3.0)], via Wikimedia Commons.

The Toledo Museum of Art announced in early April that it is selling 145 duplicative or minor artworks from its collections to other museums, and later, if not desired by museums, to the public. The artworks date to between the periods of Old Kingdom Egypt to Imperial Rome. The museum spent two years reviewing its collections to determine which objects could be deaccessioned without harming the quality and range of its collections.

Eighteen of the objects chosen for sale were among the initial gifts to the museum from founder Edward Drummond Libbey, collected by him during a 1906 trip to Egypt. These are items that Christie’s deemed of insufficient value for a major public auction: the estimates range from $150 to almost $10,000. 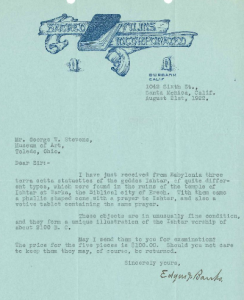 Toledo’s fall 2016 sale at Christie’s triggered complaints from Egypt, including by former culture minister Zahi Hawass, who demanded the items be returned to Egypt (although they were of types duplicated by the dozens in Egyptian museum collections) and by officials from Cyprus, who held that only other museums should have been able to acquire them.

The Toledo Museum of Art notes in the preface to the sale catalog that the offer is an experiment.  After consultation with foreign officials, the museum decided to pursue an alternative system for removing items from its collections, while maintaining that it still had the option of going directly to public sale. (Sale of artworks in order to raise funds for acquisition of other artworks is an accepted practice under the standards set by all major museum organizations.)

In the US, at least, the museum’s decision to market the items first to other museums has been widely supported, in contrast to the concerns expressed in the Toledo community regarding the first commercial auction sale at Christie’s.

Leonidas Pantelides, ambassador for Cyprus, had previously objected in principle to the 2016 public sale. He has approved the sale offer to other museums, and said in a letter to Toledo Museum of Art director Brian Kennedy that the museum should follow a similar policy for future sales. According to Roberta Gedert, writing in the Toledo Blade, Pantelides stated, “In return, both the embassy and the Hellenic American Community will laud the Toledo Museum of Art as a responsible ethical museum for engaging in rules-based deaccessioning and paving the way for responsible museum practice that can be hailed as truly pioneering,” 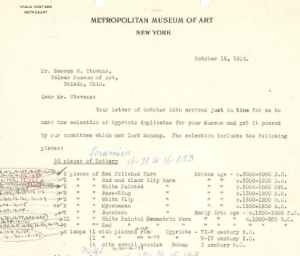 Catalog of Harlan J. Berk, Ltd. ,1916 Letter regarding acquiring duplicates from the Cesnola Collection from the Metropolitan Museum, NY; 1922 letter regarding offer to sell the museum three terracotta statuettes of the goddess Ishtar, a phallus, and a votive tablet, all for $100.

While deaccessioning is accepted under general museum practices, there is no currently accepted standard mechanism for offering materials broadly to other museums. Under the special terms of the new sale, which is managed by art dealer Harlan J. Berk, Ltd., Association of Art Museum Directors (AAMD) member museums were first offered the chance to bid or purchase the antiquities, then museums accredited by the American Alliance of Museums (AAM) and only later, if the objects are unsold, will they be made available for public sale.

The Toledo Museum’s solution to dealing with these duplicative or unwanted antiquities is similar to one suggested recently by former Walters Museum director Gary Vikan in an article appearing in Apollo magazine, in which museums would be encouraged to place artworks back into circulation when they were not needed for research or exhibition and their storage, insurance, and other maintenance costs became too burdensome on the institutions.

Harlan J. Berk’s  90-page sale catalog includes donor biographies, copies of receipts and correspondence between Mr. Libby and many other donors and the museum dating to the original acquisitions.