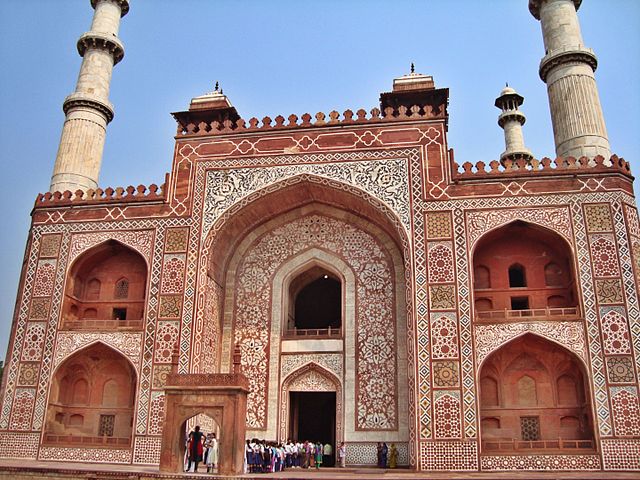 Will the next Indian elevated highway be built in front of the Tomb of Akbar in Agra? An opinion piece in The Hindu newspaper, Making of a Monumental Crisis, spotlights how Indian legislation on monuments has been undermined by government policies that favor development above preservation. History professor Nayajot Lahiri of Ashoka University writes that the latest government proposal – to strip away the narrow protections of a 1959 law prohibiting construction immediately next to a national monument – will be disastrous for India’s already endangered heritage.

According to Professor Lahiri, recent Cabinet notes show that the Ministry of Culture is now effectively acting as a clearinghouse for the Ministry of Road Transport and Highways. The Cabinet claims that amendment is necessary, in part because an elevated road should be built in Agra in front of the tomb of the Emperor Akbar.

The law to be amended is the Ancient Monuments and Archaeological Sites and Remains Act. This 1958 law (and its 1959 regulations) was originally enacted after Prime Minister Jawaharlal Nehru grew concerned about buildings that were being constructed practically on top of ancient monuments. The regulations established under that 1958 act required that land around a national monument be clear of construction for 100 m (328 feet).

Unfortunately, such rules are violated every day in India, often with collusion of government officials. Worse, it has been India’s government policy to prioritize development over protective laws for decades, and to ignore court orders demanding enforcement of heritage regulations. The Indian government estimates that there are about 500,000 monuments in India, of which only 3,650 are officially nationally ‘protected.’ (The Indian National Trust for Art and Cultural Heritage (Intach), a non-governmental, non-profit organization has identified 80,000 heritage structures in India.) Professor Lahiri reported that of the 1,655 monuments examined and inspected by the Comptroller and Auditor General (CAG) in 2013, 546 of the monuments inspected were encroached upon by illegal construction.

Lahiri notes that there is not a single full-time guard at 2,500 of the 3,650 protected national monuments. State, local, and temple authorities are supposed to have responsibility for the additional 80,000-500,000 other monuments in India, but the vast majority have no legal protection whatsoever.

This 70+ year old problem is only getting worse. Throughout India, generations of squatters have run electricity and chopped holes for access into thousands of centuries-old buildings. In Delhi, the 400-year-old Moghul tomb of state chancellor Atgah Khan is in danger of collapse. When CCP reported last year on monuments being damaged and destroyed by squatters (Satellite Dishes on Ancient Tombs: Squatters Still Living in Indian Monuments, CCP, April 20, 2016) we noted that The Archeological Survey of India (ASI) said at the time that it was unable to protect and preserve the Atgah Khan tomb because it was so encroached upon by illegal buildings that machinery and materials could not be brought to the site.

Professor Lahiri also states that politicians have connived at enabling construction in prohibited zones. Lahiri notes that while Delhi’s monuments fail to receive even a minimum of government attention, the wealthiest residential areas (where ministers live) have strict enforcement of regulations concerning unlicensed construction, overhead metro lines, and other eyesores, and do not suffer from the urban planning failures and neglect found elsewhere in the capital city.

According to a major report commissioned for 2014 by the Ministry of Culture (MOC), the Indian government has seriously failed to address multiple cultural issues. (See Report of HPC (High Powered Committee) on the Academic and other Institutions Under The Ministry Of Culture, May, 2014. The report sums up the situation as, “MOC must recognize it is “stuck in antediluvian systems and change is inevitable.”  The disaster in the making is that the “inevitable change” appears to be to abandon the Ministry of Culture’s mandate to preserve heritage altogether.